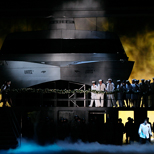 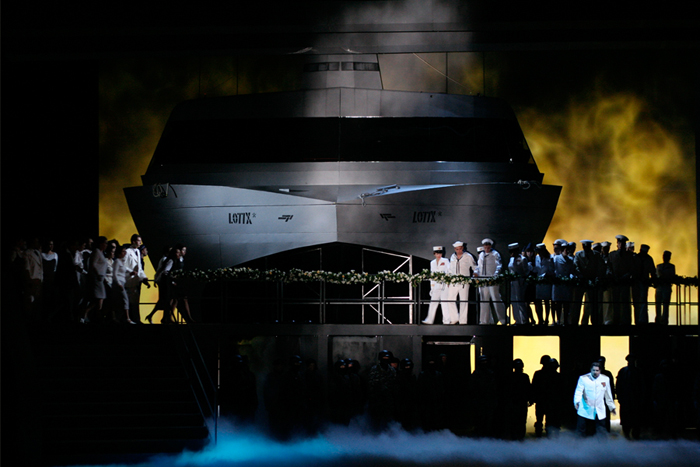 The Trojan War is over. On his way home Idomeneo, King of Crete, having been one of the most influential Greek military figures, is caught in a powerful storm. He promises Neptune, God of the Sea, to sacrifice to him the first person he meets on shore.

Act I
At the peak of the storm, Idomeneo´s son Prince Idamante has saved Ilia, daughter of King Priam of Troy. She has fallen in love with him but does not dare declare her feelings to him. Idamante has also freed the Trojan prisoners. Elettra, daughter of King Agamemnon and Orest´s sister, having fled to Crete from Argos, also loves Idamante. When Arbace the Prince´s mentor relates that Idomeneo, having desired a marriage between Elettra and Idamante, has drowned in the storm, she understands that her own wish to marry Idamante will not come to fruition. Her jealousy and longing for revenge burst forth. Idamante runs to the shore in despair to find his father.

Act II
Arbace and Idomeneo are trying to find a solution to a difficult situation: Idomeneo decides to send his son off with Elettra to Argos. Ilia appears before the King and he is drawn to her. But Ilia tells Idomeneo that she regards him only as a father. After she leaves, Idomeneo, in a fit of anger, realises that his soul will face a greater storm than that which he barely survived.
The only person to approve the turn of events is Elettra. She is permitted to leave with the Prince, whom she loves, and at the same time be rid of her rival Ilia. Idamante reluctantly submits to his father´s order. But when he and Elettra approach the ship which is to take them to Argos another storm gathers and a terrifying beast emerges from the sea. It has been sent by Neptune to punish Idomeneo. Idomeneo admits his guilt though he refuses to sacrifice an innocent person. The storm continues and all flee.

Act III
Ilia declares her feelings to the sleeping Prince. When he awakes and declares his intent to battle the monster she again speaks to him of her love. They are interrupted by the unexpected appearance of Elettra and Idomeneo, who demands that Idamante and Elettra depart immediately for Argos, refusing, however, to explain to his son the reason behind his decision. In despair Idamante withdraws before his departure for Argos, in order to fight the monster which has brought plague and ecological disaster to Crete.
Accompanied by the crowd, the High Priest approaches the palace, savagely demanding the name of the man to be sacrificed. Idomeneo then admits that his son Idamante should be sacrificed. Arbace mourns the fate of the innocent Prince.
Suddenly there is a chorus of triumphant voices declaring that Idamante has killed the beast. The returning Prince voluntarily agrees that he be sacrificed, but just as Idomeneo is about to kill him Ilia runs in, demanding that she be sacrificed in Idamante´s place. Idomeneo admits his guilt: it was he who caused this irresolvable conflict. And so now he abdicates. Idamante and Ilia are to rule the country.
In despair, Elletra prostrates herself. The Cretans celebrate the peace and honour the new ruling couple.