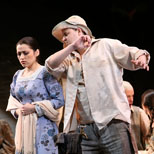 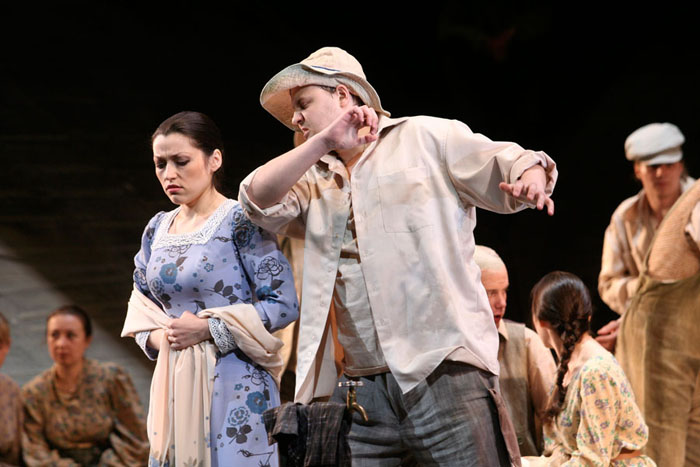 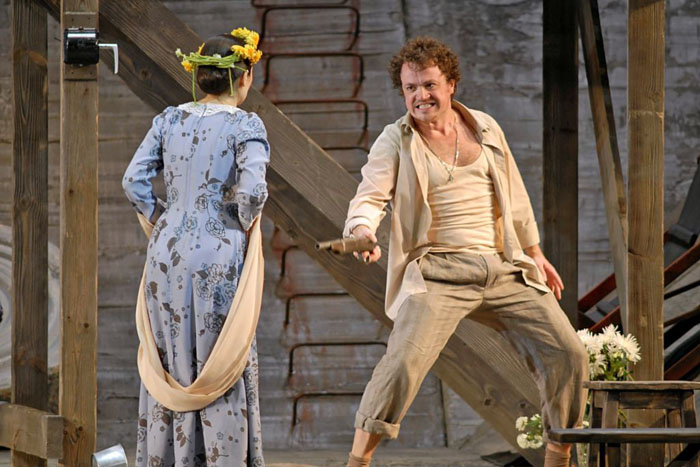 Act I
Jenůfa, the stepdaughter of the sextoness, is sitting not far from the mill. She is waiting for her beloved, Števa. The young girl sends a prayer to God that the youth has not been conscripted into the army: she is pregnant with his child. The wedding must take place as soon as possible, and her stepmother must know nothing of her adopted daughter’s sinful plight.
Led by the drunken Števa, the village boys return from the town. Jenůfa’s beloved has been saved from military conscription and he, bawling drunken songs, is breaching the peace and provoking all who come near him. Angered by the good-for-nothing’s behaviour, the sextoness resolves to delay the marriage to Jenůfa by one year. The lad will obtain his girl only on the condition that he ceases his dissolute life. Jenůfa is in despair. Števa, sneering superciliously, promises to love his girl “with cheeks as rosy red as apples.” Old Mrs Buryja, Števa’s grandmother, calls on him to return home.
Laca, Števa’s half-brother, tries to open the young girl’s eyes to her darling’s wanton ways.
Jenůfa doesn’t believe Laca and teases him... Seized with jealousy, the lad, who has felt an unrequited love for Jenůfa, slashes his beloved’s face with a knife. Then, insane with terror at what he has done, he runs away, grievous and repentant.

Act II
The sextoness’ peasant hut. Jenůfa has given birth to a son. So that no-one in the village discovers what has happened, the girl has been kept locked up for six months.
The sextoness is administering a sleeping draught to Jenůfa so that she can contemplate how to get rid of the child when the young girl is sleeping. Števa appears. The sextoness tries to convince him to marry the girl. But the lad declines to give a reply. He has become cold to the girl with whom he was in love until recently and, moreover, he has given his word to marry Karolka, the daughter of the village mayor. Without even looking at his child, he walks out.
Laca appears. He asks the sextoness for her stepdaughter’s hand in marriage. Fearful that the lad will change his decision, the sextoness resolves to commit a dreadful crime – to drown Jenůfa’s child. Awaking, Jenůfa learns from her stepmother that the infant has died during her illness. Grief-stricken by the death of her child and her beloved’s treachery, the unhappy girl agrees to become wife to the devoted Laca.

Act III
The final preparations are underway at the peasant hut for Jenůfa’s marriage to Laca. The village girls have gathered and are singing a merry song. The guests are all happy. Only the mistress of the house is saddened, troubled by her guilty conscience and unable to be at ease.
Unexpectedly, there is a cry from outside on the street – a dead child has been found under the ice of the mill-pond. Jenůfa recognises the child to be her own son from the swaddling clothes in which it is dressed. The enraged peasants are intent on stoning this evil mother to death – she is a child killer! No longer able to bear the strain of concealing the terrible truth, the sextoness admits to her crime. She is placed under arrest. The young Karolka, discovering that the child’s father is Števa, turns her back on her fiancé forever: now she knows how despicably low he really is.
The guests depart; only Laca remains with Jenůfa. Truly sincere in his feelings and unwavering in his attachment, he will remain faithful to his beloved to the end of his days.