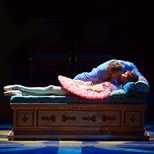 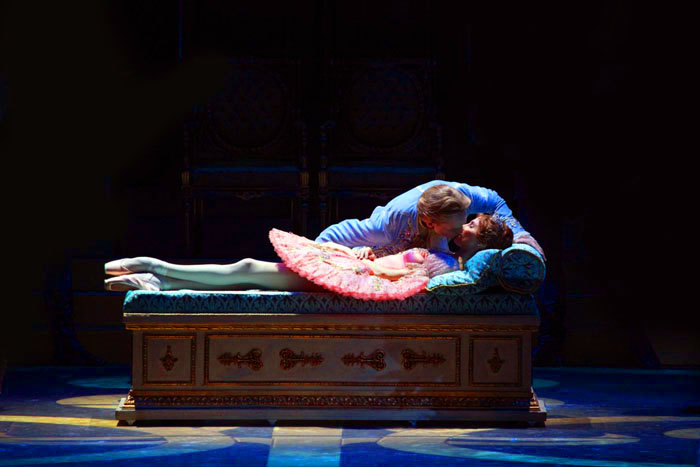 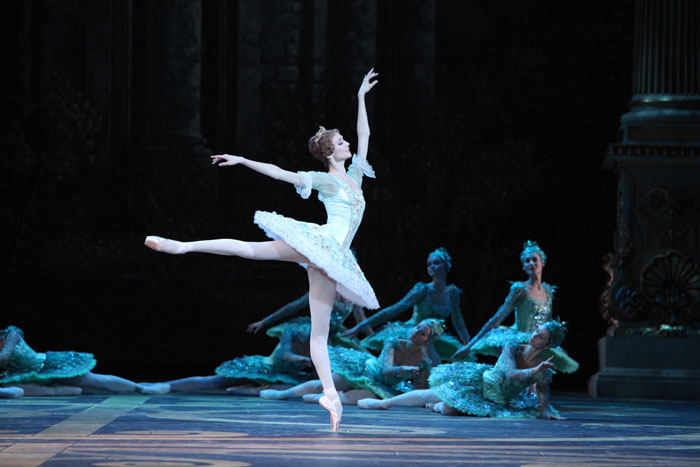 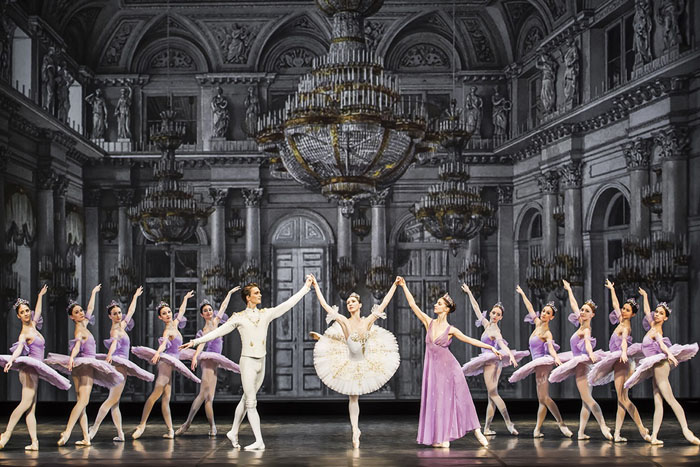 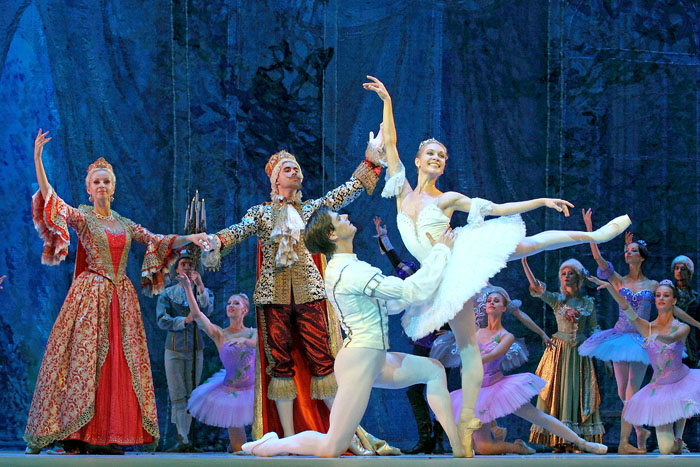 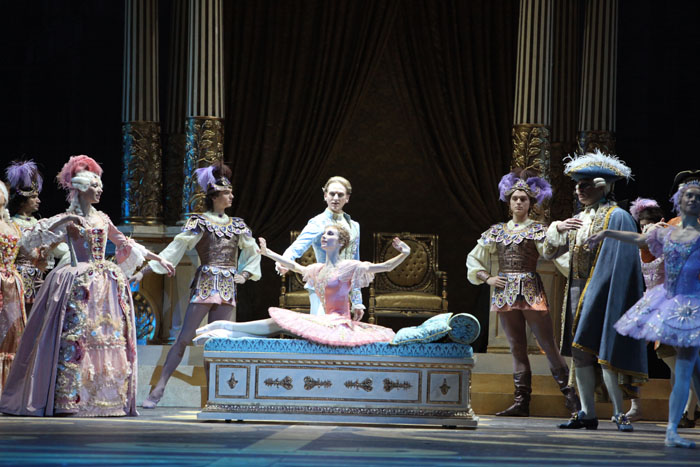 The Sleeping Beauty is a ballet in a prologue and three acts, first performed in 1890. The music was composed by Pyotr Ilyich Tchaikovsky. The original scenario was conceived by Ivan Vsevolozhsky, and is based on Charles Perrault's La Belle au bois dormant. The choreographer of the original production was Marius Petipa.

The premiere performance took place at the Mariinsky Theatre in St. Petersburg in 1890. The work has become one of the classical repertoire's most famous ballets.

The Scene begins in a Great Hall in the Palace of King Florestan XIV.

Preparations have all been made for the presentation of the newborn Princess Aurora.  Guests from all over the kingdom have been invited to present gifts to the baby, especially the powerful Fairies of the kingdom. Cattalabutte, the King's Chamberlain, makes sure the guest list is correct, and escorts all the arrivals to their proper places at court. The king and queen enter last, of course, and receive the honors of the assemblage.

The Fairies arrive with their entourages, and begin to bestow their gifts upon the Princess. But before the most powerful of those present, the Lilac Fairy, can make her bestowal, a clap of thunder is heard, and a terrified soldier runs in, announcing the arrival of the most powerful Fairy in the whole kingdom, Carabosse. The King demands the guest list and finds that she was not invited! "What is the meaning of this," he demands of Cattalabutte? "Sire, no one has heard from her in a long time, and I thought she was dead, she is so old!"

The King throws down the list in a rage, just as Carabosse's attendants, rats and gnomes, arrive, frightening the guests. She herself arrives, riding in a chariot made from a wheelbarrow, and drawn by rats. She is the ruin of what must have been a glorious and majestic woman, and she is in a fury!

Carabosse attacks Cattalabutte, pulling out his hair and feeding it to her rats, and pronounces her gift.  The Princess Aurora will grow to young womanhood, full of charms, beauty and attainments, but one day, she shall prick her finger, and she shall die! The court is horrified, the Queen begs for her daughter's life, but the old woman is adamant. She is about to charge the cradle with her rats, when her way is blocked by the Lilac Fairy.

"Stay away, O Eldest Sister" says the powerful Lilac, "I cannot undo the terrible curse you have laid upon this child, but I can do this - all that you have said will come true, even to her pricking her finger, but she shall not die, but only sleep for a long time, until a noble and handsome man shall come to her out of love, kiss her on the forehead, and then she shall wake."

Carabosse,  enraged, appeals to her sister Fairies, who rebuff her, she returns to her chariot and drives off in a cloud of wrath. The King and Queen and the entire court form around the cradle, vowing to protect the Princess Aurora from any further harm.

Act I - The Spell

It is the birthday of the Princess Aurora, and the festivities are well on their way to completion when some women are discovered within the castle precincts carrying knitting and spinning tools. Cattalabutte discovers them, and tries to send them away before the King can discover their presence. The King and Queen enter, discover the women and their contraband, which has been forbidden in the kingdom, and the King flies into a rage, and declares that they must be executed! Four princes, coming from foreign lands to pay homage and court the Princess Aurora, interceds with the King to have mercy, and he relents.  The crisis averted, the villagers dance a waltz with garlands they have prepared.

The whole court awaits breathlessly as the Princess Aurora comes to greet her parents and the visitors. She dances with each of the Princes in turn, and charms each of them with her great beauty and accomplished dancing.

The celebrations continue until a mysterious figure shrouded in black appears, offering a gift for the Princess. It is a set of needles! The Princess has never seen such things before, having been protected by her father's decree, and begins to play with them. Before anyone can stop her, she pricks her finger, and begins to feel the effects of the spell take over. She dances dizzily, then collapses. The King and court are horrified; the figure who gave her the needles throws off her cloak and reveals herself -- Carabosse!

The old woman laughs at the distress of those who had done her wrong.   The Princes draw their swords and pursue her, and she disappears into smoke and fire.

As Carabosse vanishes, the Lilac Fairy appears and assures the King and Queen that the Princess has not died, but is only in a deep sleep. "Carry her to her chamber," she commands, "for now it is time for my gift."  As the unconscious Aurora is carried up to her bed, the Lilac Fairy turns to the assembled populace in the garden, waves her wand, and the spell begins. The entire kingdom falls into a deep sleep as great vines and leaves grow up about it, shielding it from the eyes of the curious, and the mischief of evildoers.

Scene 1 - The Vision Scene: A distant kingdom, the forest

A hunting party arrives at a clearing in the forest, led by Prince Desire'. None of the diversions of his noble friends nor of the friendly villagers can dispel his gloom, and they leave him to his reveries. Just as the moon comes out from behind the clouds, the Lilac Fairy appears and sends the Prince a vision of the sleeping Princess Aurora. The Prince is overcome with her beauty, and asks the Lilac Fairy who she is, and where she can be found. "Behold," she says, "I can make it seem as if she were right here with us!" The Fairy waves her wand, and the forest spirits appear, and suddenly in their midst is the very image of the Princess. She dances with the Prince in the midst of the spirits and then vanishes with them.

The Prince is truly eager to find Aurora for real, and the Lilac Fairy beckons to him to join her in her shell-boat as they voyage the river together to the kingdom of King Florestan.

As the Lilac Fairy and Prince Desire' glide smoothly down the river, visions of the Castle, the King and Queen, the Fairy Carabosse, and the Princess Aurora herself appear, as the Fairy explains to the Prince what has happened.

Prince Desire' and the Lilac Fairy come upon the castle garden with all the guests still asleep. They enter the courtyard and discover the servants all asleep at their work and they make their way to the Princess' chamber, which is covered in dust and cobwebs. "There she is," gestures the Fairy. "But what shall I do now," he asks? "Just think a moment," she replies. He does, briefly, then rushes impetuously to her bedside -- and kisses her on the forehead, just as the Fairy had predicted he would.

The King, Queen, and court wake as all the spiderwebs, dust and vines vanish. Prince Desire' asks the King for his daughter's hand in marriage, and he immediately consents!

scene: The Esplanade of Castle Florestan.

All the fairy tale characters from Charles Perrault's stories come to celebrate the wedding of Princess Aurora and Prince Desire'.

The Fairies' Glory -- a grand tableau before a scene of the Versailles gardens, over which Apollo presides.

And they all lived happily ever after!