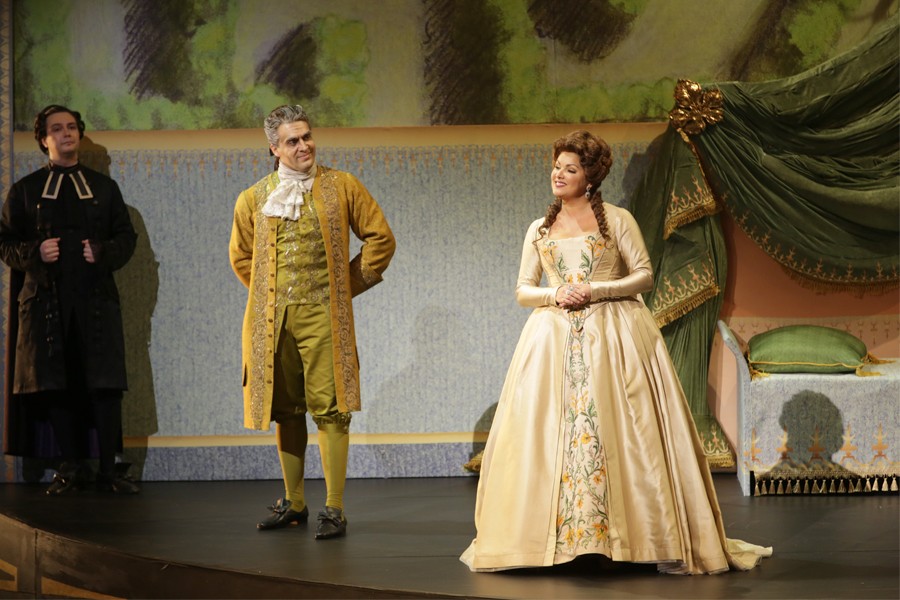 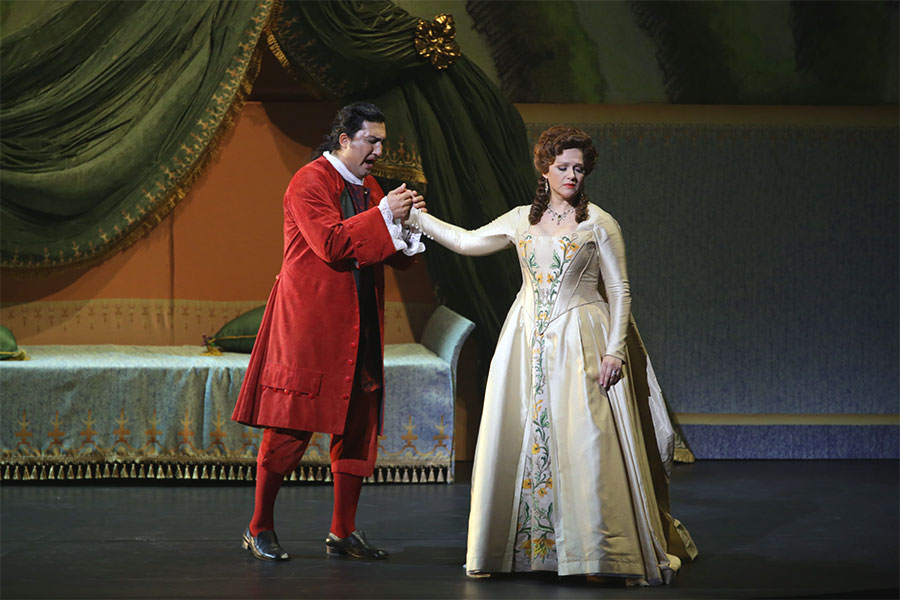 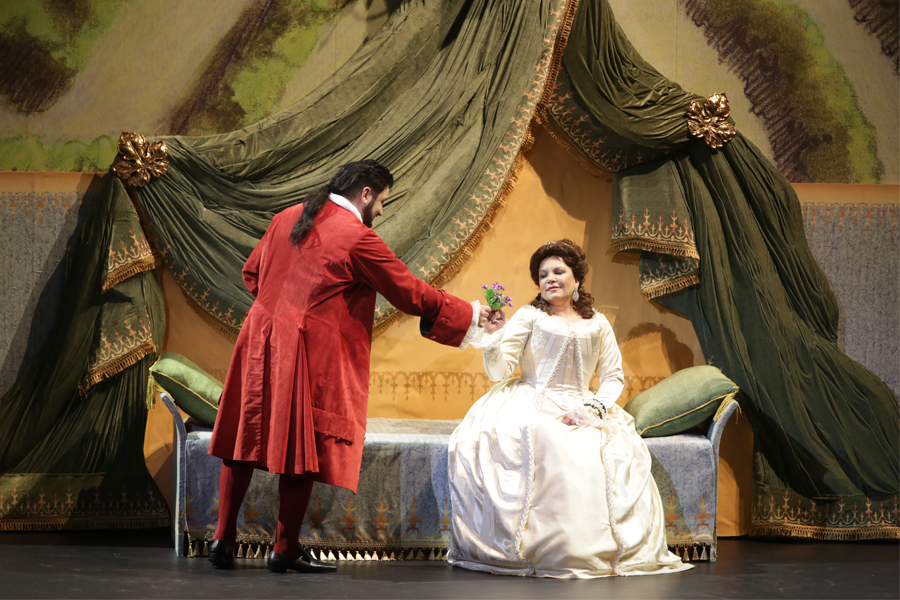 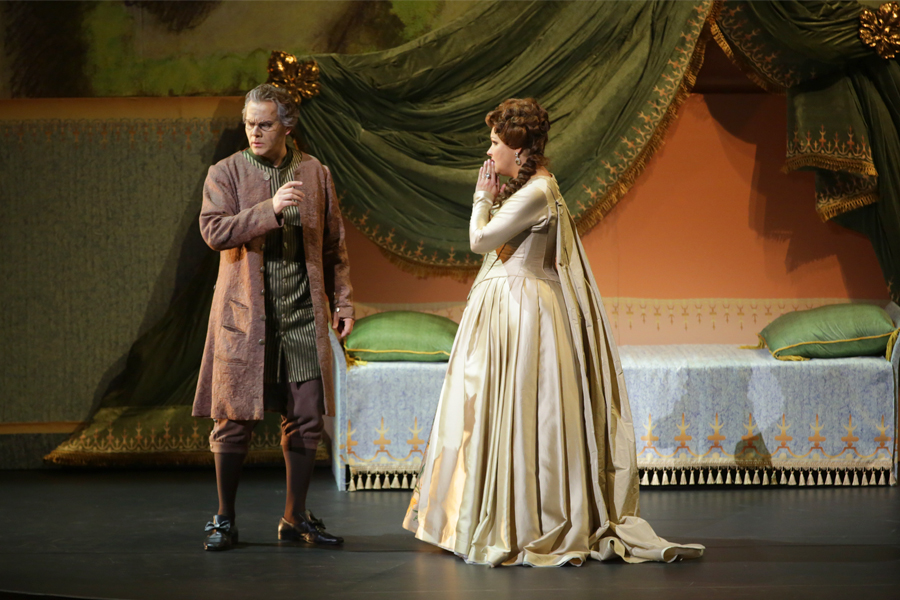 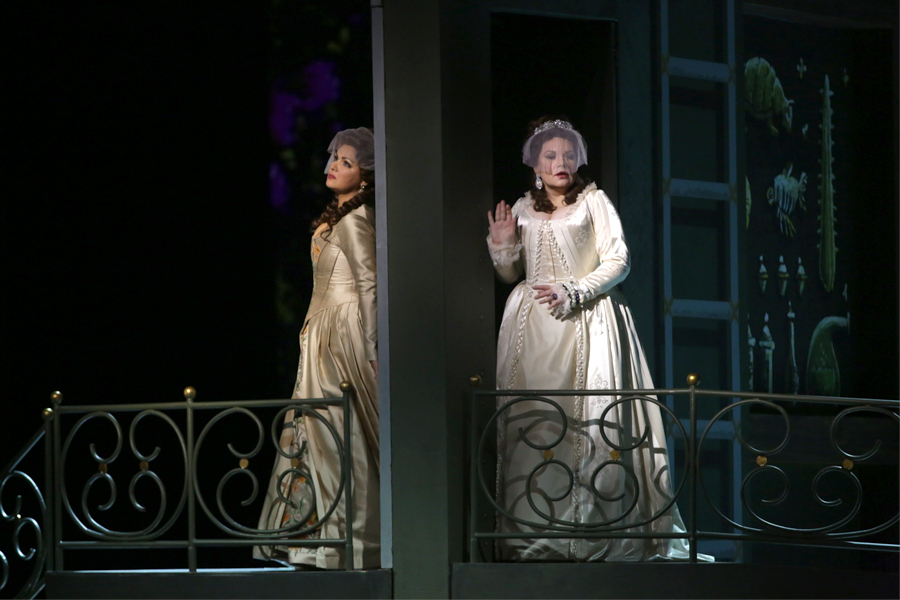 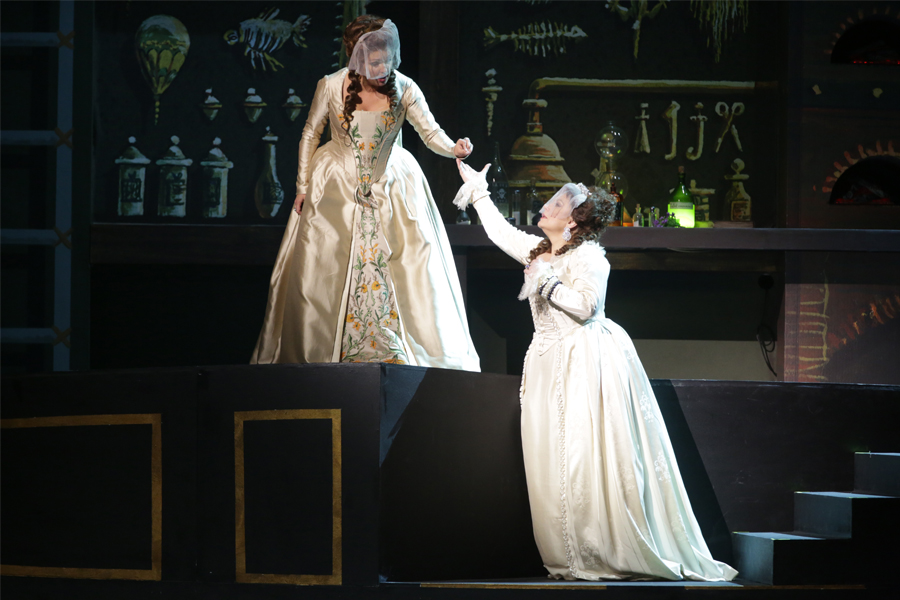 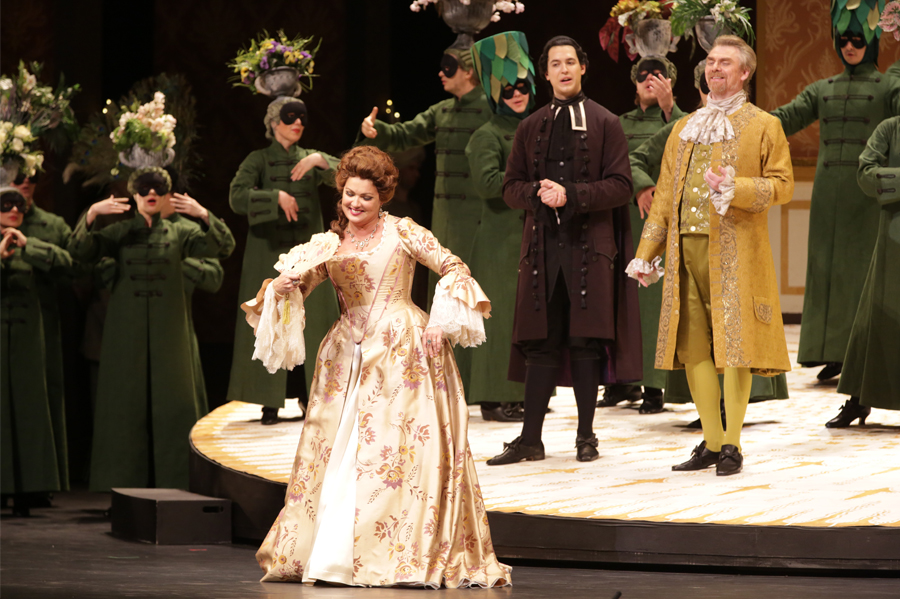 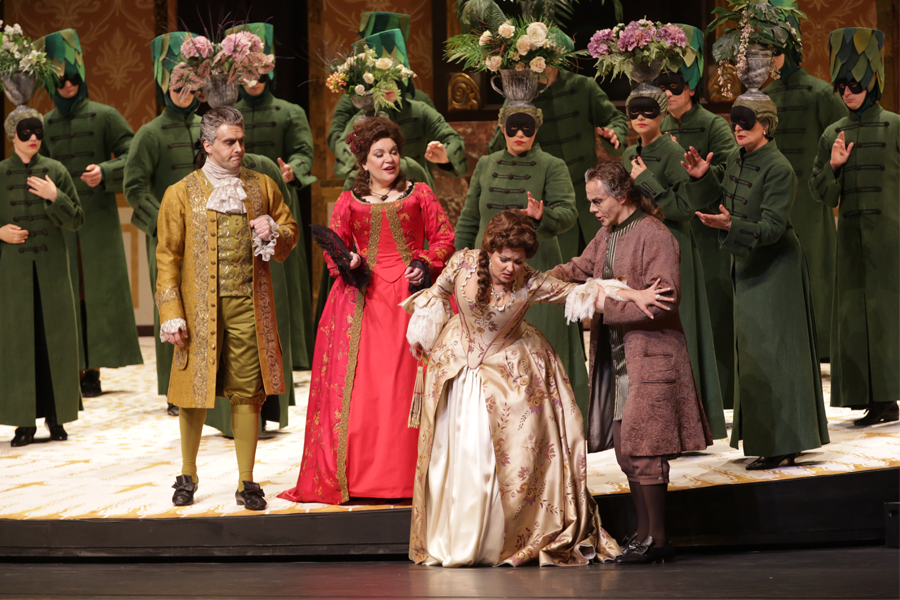 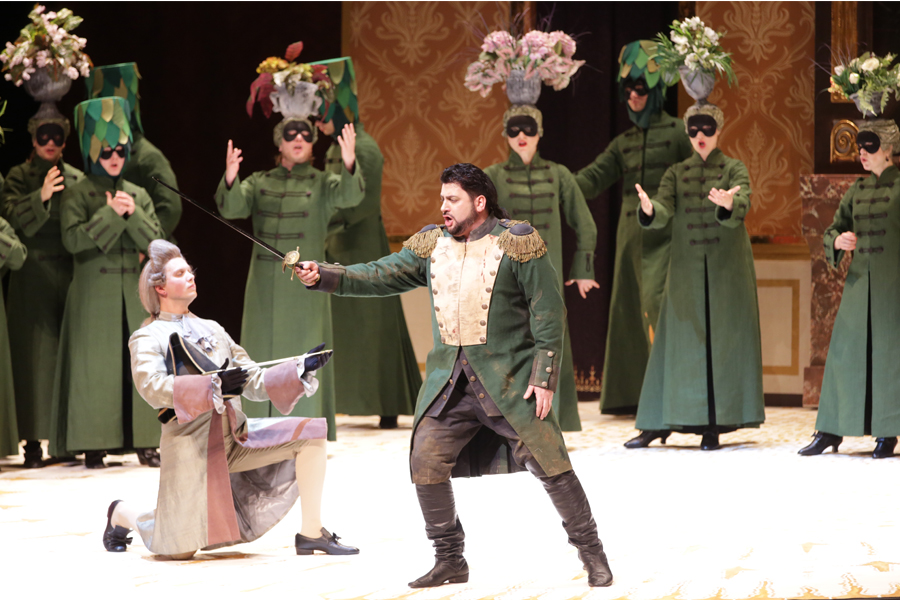 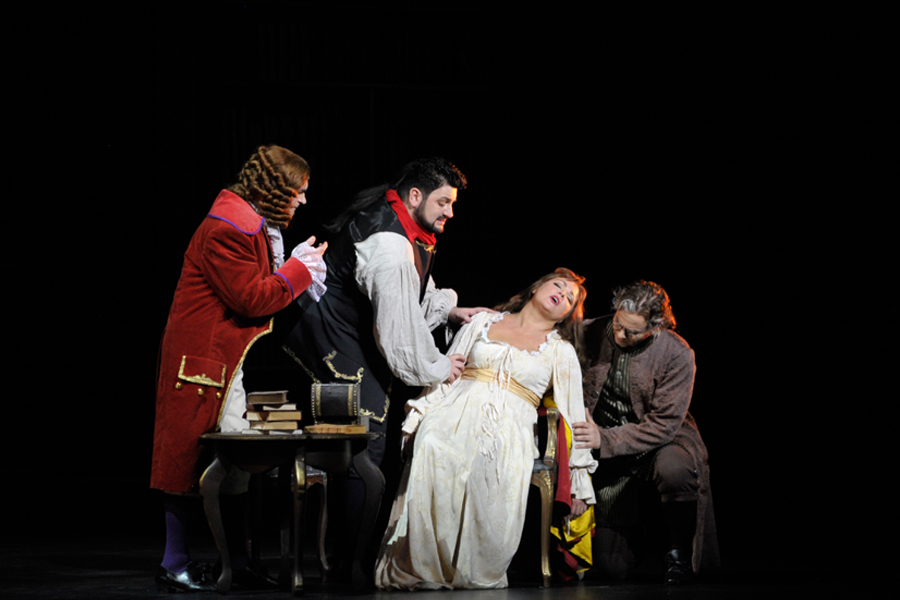 The performance has one interval

Act I
Backstage at the Comédie-Française
The performance is about to start and the company bustle around Michonnet, the stage manager. The actors are already dressed for the two performances that night – Bajazet and The Madness of Love. Michonnet deplores that a stage manager’s life is a life of servitude. His deliberations are interrupted by a row between the actors. He rushes to calm them down. The Prince de Bouillon, admirer of the actress Duclos, is with his companion, the Abbé, and together they go backstage. There they try to ingratiate themselves with the actresses. Michonnet tries to fuel the interest of the public: he arranges for Adriana Lecouvreur and Duclos to perform in one production. Upon seeing Adriana, dressed in Roxane’s Eastern costume and reciting a monologue, the guests are quick to express their adoration for her. Adriana responds that she is just a humble servant of the art, passionately in love with the stage. As for the Prince’s question regarding Duclos, Michonnet tells him that she is hurriedly writing something in her dressing room. The wounded admirer orders the Abbé to intercept Duclos’ letter.

Everyone leaves except for Adriana and Michonnet. Desperately in love with Adriana, Michonnet is finally ready to open up his heart to the actress. The stage manager then talks about the inheritance he received and his intentions to marry. However, Adriana confesses that she is in love with Maurice, a squire in the service of the Count of Saxony, who returned from the war the day before. Adriana is unaware that Maurice is in reality the count himself. He enters and passionately declares his love for Adriana. They agree to meet after the performance. Adriana gives Maurice some violets and hurries to the stage.

The Prince and the Abbé read Duclos’ intercepted letter: “Tonight, at 11 pm, I will be waiting for you at the villa by the Seine. I have a very important political affair to discuss with you. Silence. Constancy.” The Prince de Bouillon is amazed with Duclos' courage as she requests a meeting with her lover near the Prince's own villa! The letter is addressed to the third box, so the jealous Prince is convinced that Maurice is his rival. The noblemen want to expose the affair and they arrange for the company to attend an evening party at the Prince’s villa. The actors, now back from the stage, overhear the conversation and laugh at the schemers.

Michonnet adoringly watches Adriana’s performance from backstage. He suddenly remembers the letter which is supposed to be given to the main character, Roxane, during the performance. He leaves it on the table. Maurice enters. The letter delivered to him was indeed from Duclos, but the meeting was arranged not by Duclos, but by the Princess de Bouillon, with whom the Count is in a close relationship. Maurice, saddened that he has to cancel his appointment with Adriana and has no time to tell her about it in person, writes a note over the letter prepared by Michonnet. He then sends the note with Jouvenot.

Everyone congratulates Adriana on her success. The Prince and the Abbé invite the company to the villa. Adriana, wanting to meet the Count of Saxony who is to be among the guests, agrees to join the Prince's party. The Prince de Bouillon gives her the key to the gate – Adriana lives close to Duclos.

Act II
Grange-Batelière, Duclos' villa
The Princess de Bouillon, tormented by jealousy, is waiting for her lover and protégé – Maurice of Saxony. When her belated suitor enters, she sees the violets attached to his uniform and asks how he came by them. He assures her that the flowers were meant for her. Upon learning about the looming trouble at court from the Princess, the Count decides to leave Paris for a while. This plan drives his date to the verge of despair: her lover’s feelings must have cooled if he decided to leave her so easily. Maurice admits he no longer loves her. The Princess guesses he has a lover and asks him to reveal her name. The Prince and the Abbé suddenly arrive and the Princess has to hide in the adjacent room. The guests are delighted to have caught the Count red-handed. They have not seen the lady, but they are sure that the lady in question is Duclos. They mock Maurice and playfully apologize for disrupting his date. The Prince is even ready to give his favorite to Maurice.

Adriana enters. The Prince de Bouillon introduces Maurice as the Count of Saxony. At first she is confused, but eventually forgives her lover at a private meeting. Michonnet visits Duclos to resolve an urgent matter. The Abbé, who now stands guardian at the actress’ house, hints that there is no need to search for Duclos as she is in the next room. Adriana is blindsided by jealousy, but Maurice swears that it is not Duclos who is in the hiding. He begs Adriana to save the honour of the mysterious lady, telling her the assignation was political. The Count’s words are confirmed by Michonnet, who has spoken to the lady in question in the dark. Adriana promises to help the lady escape and releases her from the room. However, both women are full of mutual suspicions. The ensuing quarrel ends with the Princess’ escape. Michonnet finds a bracelet she left behind.

Act III
The Hôtel de Bouillon
The Abbé is preparing the party and showering the Princess with compliments. She is overwhelmed with desire for revenge. The Princess recognizes the voice of Adriana, who is also invited to the party. To confirm her suspicions, the Princess announces that Maurizio has been wounded in a duel. Adriana faints. The butler announces the Count’s arrival. The guests ask the Count to tell them about his recent adventures in Courland. A ballet is performed: “ The Judgement of Paris”.

During the dances, the Princess and Adriana turn upon each other with bitter remarks, trying to determine who was present at Duclos’ villa. While one hints at the violets, the other shows the found bracelet. Everyone admires the beautiful trinket, the Prince, however, recognizes his wife’s piece of jewellery. The Princess pointedly suggests that Adriana should recite a scene from Ariadne abandoned, the Prince asks instead for a scene from Phèdre. Adriana recites the monologue from Phèdre, in which the character chastises herself for her forbidden passion, for cheating on her husband. Adriana uses the final lines of the text to make a headstrong attack on the Princess, who determines to have her revenge.

Act IV
Adriana's house
Michonnet is waiting for Adriana to wake up, standing at the doors to her room. She has abandoned the theatre and now avoids company. The old man whose feelings are still true is deeply concerned about his protégée. He sends a note to the Count with a servant. Adriana cannot even think about the stage or fame. She is set on revenge. Actors come to congratulate her on her name day. However, Adriana has forgotten all about it. Michonnet has retrieved a diamond necklace – a gift from the Queen, previously pawned by Adriana. Michonnet has spent his inheritance to buy it back. The actors try to persuade Adriana to return to the theatre. They tell her that Duclos could not stand the Prince’s stinginess anymore and so she left him. They have even written a joyful song about it. The servant delivers one more gift – a casket with a note from Maurice. Inside are the faded violets that she had once given to her lover. Michonnet assures Adriana that it was not the Count who sent the casket – it is a woman’s revenge. Adriana smells the flowers, kisses them and throws them into the fire. Maurice’s voice is heard in the background. He is come to beg her for forgiveness. He asks Adriana to marry him. However, it is too late – Adriana becomes deranged. Michonnet realises that the flowers were poisoned. Adriana dies professing her love for Maurice.