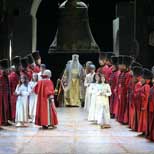 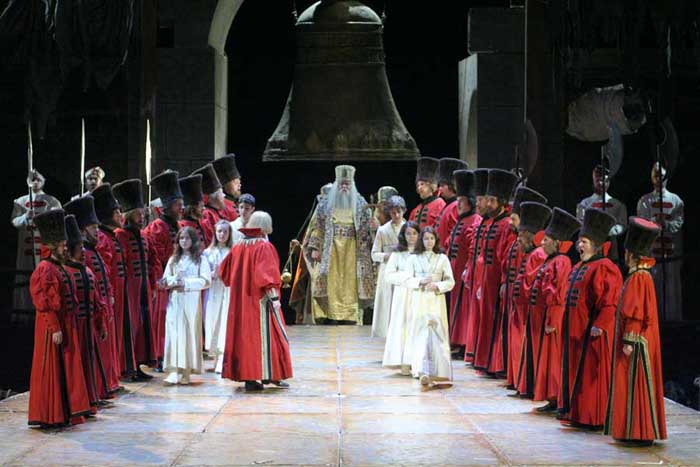 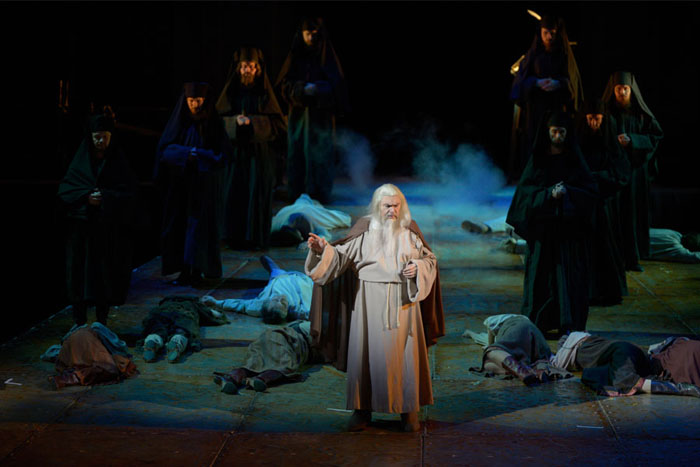 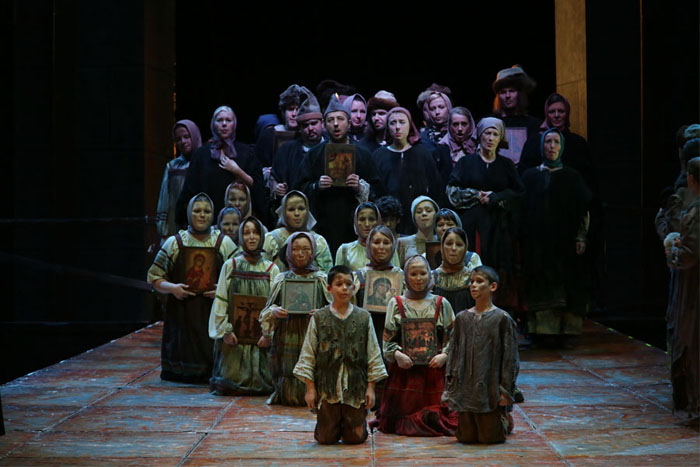 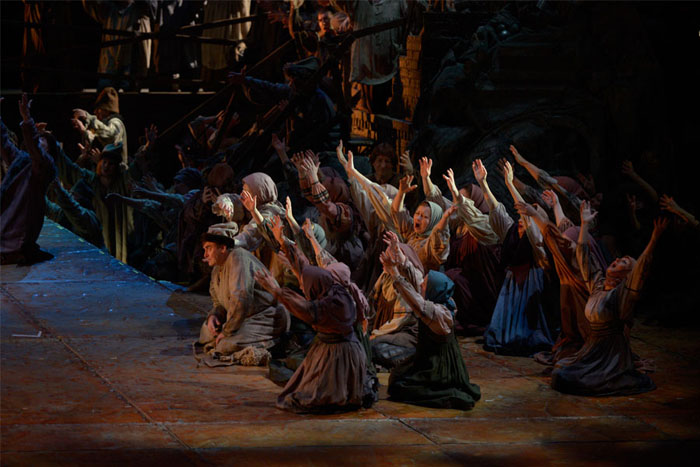 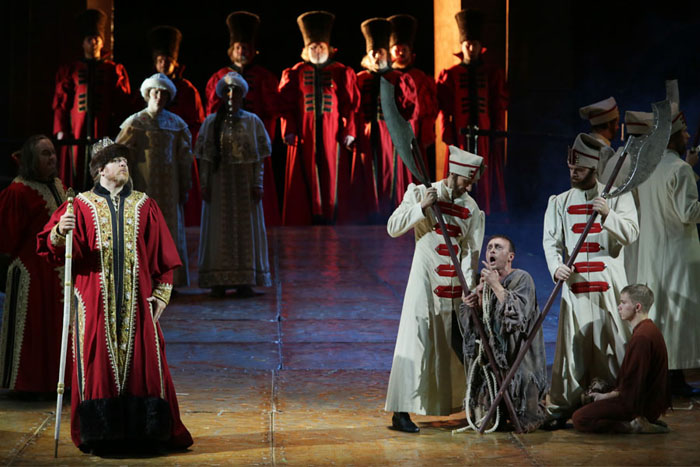 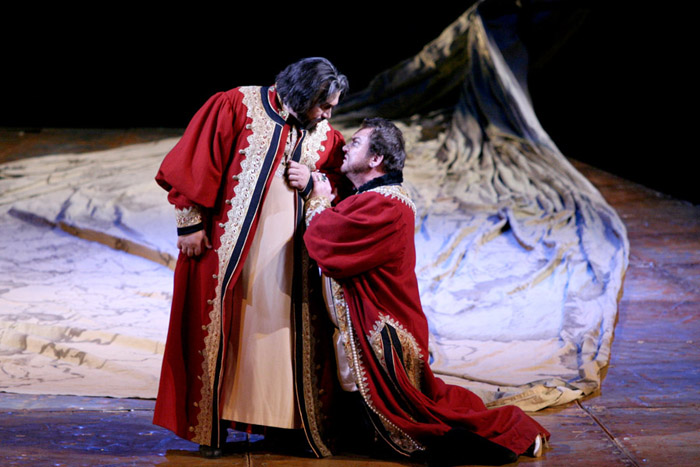 Prologue
Novodevichy Monastery.
… 1598. Tsar Fyodor Ioannovich has died without an heir. Boris Godunov had been the de facto ruler under Fyodor’s reign, having shown exceptional wisdom in the cause of the Russian State. He tried to claim the throne but the boyars – of more noble birth than Godunov – resisted him, spreading ill tales about him and that it was he who ordered the death of Tsarevich Dmitry in Uglich, the legal heir to the throne and the younger son of Ivan the Terrible.
In order to achieve his desired aims, Boris ostensibly removes himself and his family to the Novodevichy Monastery; Godunov’s adherents have assembled the people to “ask Boris to be Tsar”. The people reluctantly obey, expressing apathy and indifference to what is happening. Shchelkalov, the scribe of the Boyars’ Council, declares that Boris is adamant in his resolution. However, the Patriarch and the boyars close to Godunov nonetheless “beg” him to ascend the throne.
A bailiff announces the boyars’ decree: “Be in the Kremlin on the morrow and await orders.”

A square in the Kremlin.
Godunov is crowned Tsar. Boris has achieved everything he wanted but… “My heart laments, some kind of unbidden fear has filled my heart with a premonition of evil.” Tsar Boris yields before the “exultant people”. Can he be won over?

Act I
Pimen’s cell in the Chudov Monastery. “
One more tale and my manuscript is complete…” The young monk Grigory awakes from a troubled dream: for the third time he has seen himself ascending a steep staircase in his sleep, looking over Moscow and falling downwards: “I became both ashamed and frightened…”
Grigory is troubled that he does nothing at the monastery. He envies Pimen for the rich tapestry of events that occurred in his younger days. He is particularly interested in the death of the young Tsarevich in Uglich. “He was the same age as you and reigned,” Pimen answers. Pimen’s words about the murder of the Tsarevich on the orders of Boris Godunov open a fiendish plan to Grigory.

An inn at the Lithuanian border.
The wandering Varlaam and Misail are joined by Grigory, who has fled the monastery. The innkeeper tells him how to get into Lithuania without passing the guards.
Guards appear unexpectedly in the hope of profiting from the monks’ “weaknesses”: who are they and where are they from? Wishing to alarm them, the guards produce a decree for the capture of the “heretic Grishka Otrepiev”. In order to remain incognito Grigory offers to read the decree and names Varlaam’s features instead of his own. The indignant Varlaam reads the decree for himself. Grigory flees.

Act II
A terem in the Moscow Kremlin.
Tsarevna Xenia mourns her dead husband, while Tsarevich Fyodor examines the map of Russia.
With his family Boris Godunov is good and kind. But he cannot dismiss his gloomy thoughts: “I have supreme power. I have reigned in peace for six years. But my soul knows no rest…”
Informed by Prince Shuisky of the Pretender in Lithuania calling himself Dmitry, Godunov loses his self-control. He insists that Shuisky confirm the death of the young Dmitry in Uglich. The Prince’s detailed story is agony for Boris.

Act III
Poland. Commander Mnishek’s Sandomir Castle.
Grigory Otrepiev, claiming to be the saved Tsarevich Dmitry, meets Marina Mnishek – a coquettish, calculating and spoiled young lady.
The Jesuit Rangoni must fulfil the wishes of the Pope in Rome as his secret emissary. In order to enter Russia and turn the nation into a Catholic land he needs a union between Marina Mnishek and the Pretender. However, Marina herself dreams of becoming Tsarina of Russia. She succeeds in inflaming the Pretender’s ambitions.

Act IV
The square before St Basil’s in Moscow.
Prior to a service in the cathedral, where Grishka Otrepiev is being denounced and eternal prayers are being said for the Tsarevich Dmitry, the people are discussing the rumour that the Tsarevich was saved and his troops are close to Moscow.
The imperial procession begins. The people pray and demand “Bread! Bread! Bread for the hungry!”
The Simpleton interrupts the Tsar’s procession. Another wound to Godunov’s soul: “We must not pray for a tyrant Tsar!”

Night. The Chamber of Facets in the Kremlin.
An emergency meeting of the Boyars’ Council: the Pretender’s army is close to Moscow.
The boyars are worried at Shuisky’s account of the Tsar’s illness. Boris is overcome with superstition, suspicion and fear.
Shuisky tells the tortured and suffering Boris to listen to Pimen’s tale of how a blind monk was cured over the grave of St Dmitry.
Boris has lost his self-control. Sensing the end is nigh he calls his son and orders him to “Remain pure, Fyodor, purity is your strength and power, the fortress of your reason and your salvation…”
Tsar Boris dies.

A huge crowd has gathered near Kromy awaiting the False Dmitry.
The people want to see an end to the boyar Khrushchev, Tsar Boris’ servant. Incited by Varlaam and Misail’s tales of the intrigues and evils in Russia the people are prepared to “overturn” the satanic throne and overthrow the regicidal Boris’ illegitimate rule. The people praise Dmitry. But the appearance of the Pretender is anticipated by his Jesuit advisors (he has secretly adopted Catholicism). The people are ready to take care of them too, these “damned crows”.
The False Dmitry names himself Tsar and promises grace and protection.
The Simpleton mourns the bitter fate of Mother Russia.