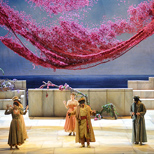 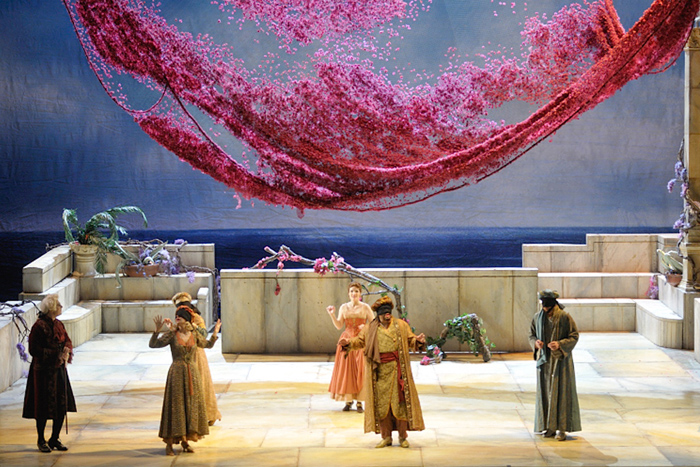 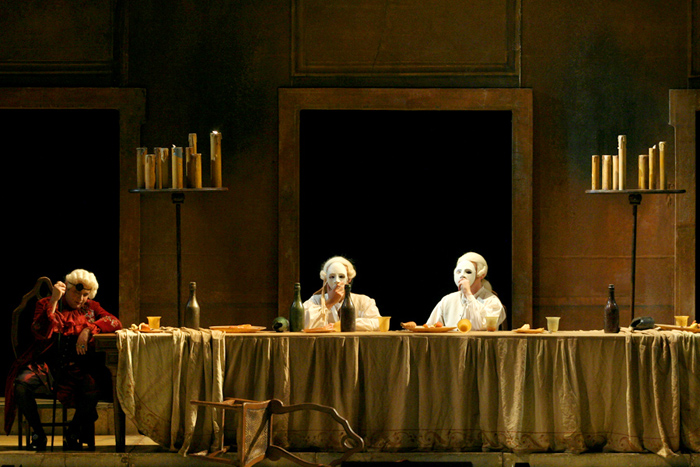 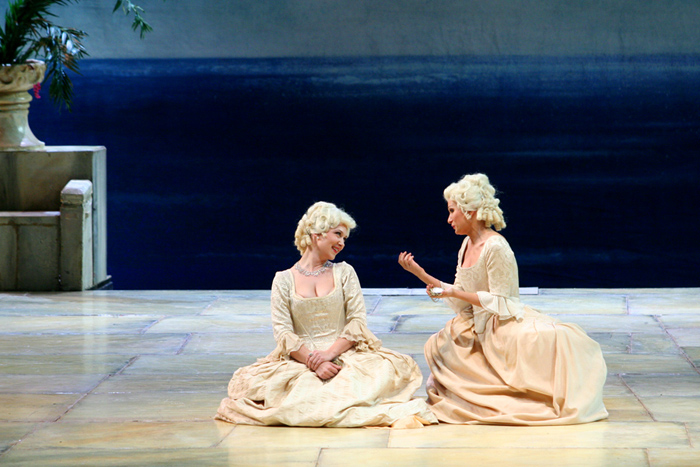 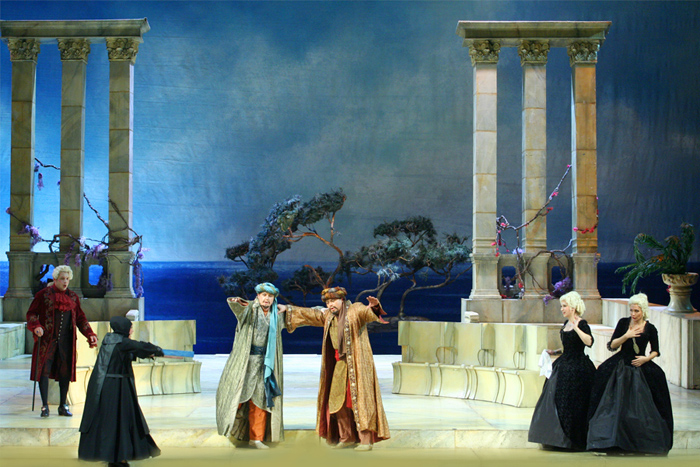 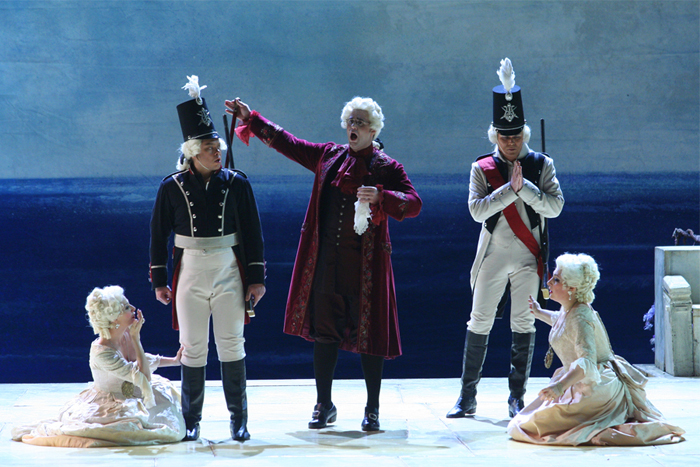 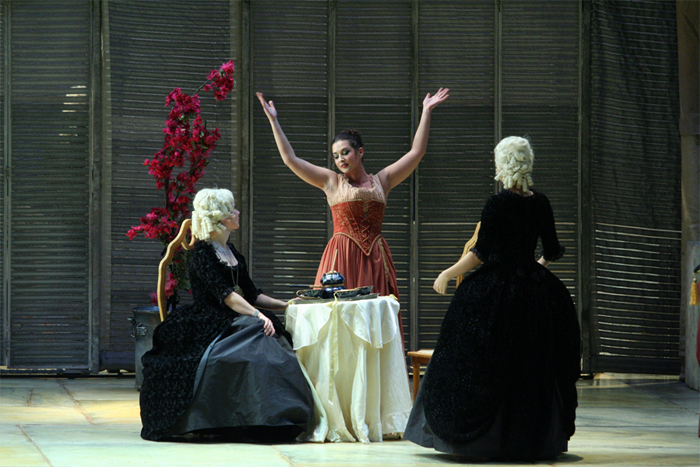 Act I
A coffee-house. Ferrando and Guglielmo proclaim the virtues of the sisters Dorabella and Fiordiligi, to whom they are betrothed; Alfonso is sceptical (trio, "La mia Dorabella"). The young men prepare to defend the ladies´ honour with swords, but the diatonic brilliance of music shared by all three argues no great discord. Alfonso declines to fight, but calls them simpletons to trust female constancy: a faithful woman is like a phoenix; all believe in it but none has seen it (his mocking pianissimo unison cadence resembles the motto). The other insist that the phoenix is Dorabella/Fiordiligi (trio, "E la fede delle femmine"). Alfonso wagers 100 zecchini that fidelity will not endure a day of the lovers´ absence; he will prove it if they promise to obey him while wooing each other´s betrothed in disguise. Ferrando plans to spend his winnings on a serenade, Guglielmo (the first division between them) on a meal; Alfonso listens politely (trio, "Una bella serenata"). An extended orchestral coda closes a scene of purely buffo electricity.

A garden by the sea (morning). The girls sing rapturously of their lovers (duet, "Ah guarda sorella"); Dorabella (surprisingly, in view of the sequel) touches a note of melancholy before they launch into voluptuous coloratura in 3rds, united in loving the idea of loving. Alfonso appears, the prolonged F minor cadences of his tiny aria ("Vorrei dir") choking back the awful news: their lovers are to leave for active service. The men take solemn leave with only hints at lyricism (quintet, "Sento, o Dio"). The girls´ agitation is coloured by the dominant minor; Alfonso quells any premature delight at this evidence of love. Ferrando´s lyricism (to a motif from the trio, "Una bella serenata") now matches the girls´; Guglielmo sings with Alfonso (this inevitable consequence of differences in tessitura continually invites differentiation of character). The girls declare they will die. A march is heard (chorus, "Bella vita militar"). They embrace, promising a daily letter, their rapturous indulgence in misery (particularly intense in the melodic line, taken by Fiordiligi) counter-pointed by Alfonso´s efforts not to laugh (quintet, "Di scrivermi ogni giorno"). The men embark (reprise of the chorus); Alfonso joins a moving prayer for their safety (trio, "Soave sia il vento"), the orchestra evocative yet sensuous. Alfonso prepares for action (arioso); "He ploughs the waves, sows in sand, traps the wind in a net, who trusts the heart of a woman".

A furnished room. Despina has prepared the ladies´ chocolate and is sampling it when they burst in. Dorabella explains their despair, but her extravagant grief leaves her barely coherent (obbligato recitative and the first real aria,"Smanie implacabili"). Despina cannot take them seriously; surely they can find other lovers. In the teeth of their protests she inverts Alfonso´s creed (aria, "In uomini"): men, especially soldiers, are not expected to be faithful; women should also use love to enjoy themselves. Alfonso bribes Despina to assist him, without revealing the plot. The men enter as "Albanians", their bizarre disguise impenetrable even to the sharp-witted Despina (sextet, "Alla bella Despinetta"). Recovering from laughter, she helps them to plead with the ladies (Alfonso being concealed); they are rejected in a furious Allegro. Alfonso claims them as his friends, but after the men´s voices unite, turning recitative towards arioso, Fiordiligi articulates her constancy in a powerful recitative and aria ("Come scoglio"); she stands firm as a rock in tempestuous seas. Guglielmo´s patter-song in praise of his own appearance (especially the moustaches) find no favour ("Non siate ritrosi"). As the outraged girls depart, the men bubble with delight (trio, "E voi ridete?"), a brilliant hocket covering Alfonso´s insistence that the more the girls protest, the more sure is their fall. Guglielmo wonders when they can get lunch; Ferrando enjoys the atmosphere of love ("Un´ aura amorosa"), muted violins and clarinets supporting his ardently extended line.

The garden (afternoon). At the beginning of the finale, the girls unwittingly share Ferrando´s mood of longing, spinning a tender D major melody to a gently ironic rococo decoration of flutes and bassoons. How their fate has changed! Their sighs are displaced by fear when the men rush in drinking poison, to music (in G minor) suddenly suggestive of tragic violence. Alfonso and Despina go for help, instructing the ladies to nurse the men, who are thoroughly enjoying themselves; yet minor modes prevail as never before in Mozart´s finales. Despina, to a pompous G major minuet, appears disguised as the doctor, invoking Mesmer as she magnetizes out the poison. The key abruptly changes to B: the men profess to believe they are in paradise. In the final Allegro (in D) the men request a kiss and are again rebuffed.

Act II
A room. Despina tries to persuade her shocked employers that there is no harm in a little flirtation. In Mozart´s slyest buffo soprano aria ("Una donna a quindici anni"), she explains that a young girl who knows the arts of attracting men can have them at her mercy. The girls agree that there can be no harm in a little light flirtation, and they select partners (duet, "Prendero quel brunettino"). Dorabella will take the brownhaired one (Guglielmo), Fiordiligi the blond (Ferrando; thus they fall in with the men´s plan); and they prepare to amuse themselves.

Furnished garden by the sea (early evening). The serenade on wind instruments, repeated by the lovers and chorus ("Secondate, aurette amiche"), is a prayer for success in love. The four meet but are tongue-tied; Alfonso and Despina give a lesson in etiquette (quartet, the ladies silent, "La mano a me date"), and join their hands. The couples prepare to walk round the garden. Guglielmo is all too successful in winning Dorabella´s heart and a mark of her favour, replacing Ferrando´s portrait by his own gift, a pendant heart (duet, "Il core vi dono"). The gently bantering 3/8, in F major, matches Dorabella´s innocent flirtatiousness; Guglielmo can hardly believe his success, but falls comfortably in with her mood. Fiordiligi rushes in, pursued by Ferrando: she has seen in him temptation, a serpent, a basilisk; he is stealing her peace. He protests that he wants only her happiness and asks for a kindly glance, noting that she looks at him and sighs. Her lovely soul will not long resist his pleading; otherwise her cruelty will not long resist his pleading; otherwise her cruelty will kill him ("Ah lo veggio quell´anima bella"). Fiordiligi wrestles with her consience, her obbligato recitative ("Ei parte"). In her deeply expressive rondo ("Per pieta, ben mio") she asks her absent lover´s forgiveness. Dorabella´s fickleness rouses Ferrando to fury (obbligato recitative, "Il mio ritratto! Ah perfida!"). Guglielmo tries to console him by adopting Alfonso´s philosophy (aria, "Donne mie la fate a tanti"); he is fond of women and defends their honour, but their little habit of deceiving men is reprehensible. The restless perpetual motion conveys Guglielmo´s confidence that the tragedy will not befall him. Ferrando´s feelings are in turmoil (obbligato recitative, "In qual fiero contrasto"). An obsessive orchestral figure projects shame ("Alfonso! How you will laugh!") and anger ("I will cut the wretch out of my heart") beyond the decorum of comedy. His pride piqued, he agree to a further attack on Fiordiligi.

A room, with several doors, a mirror, and a table. Despina praises Dorabella´s good sense; Dorabella answers Fiordiligi´s protests in a graceful 6/8 aria ("E amore un ladroncello") which, despite its sophisticated instrumentation, shows her conversion to Despina´s easy virtue; love is a thief, a serpent, but if you let him have his way, he brings delight. Alone, Fiordiligi resolves to repel her new suitor; sadistically observed by the men, she prepares to join her lover at the front. She launches an aria ("Fra gli amplessi"), but as she quickens the tempo from Adagio Ferrando joins in Ferrando´s lyricism outdoes hers. The note of true ardour is intensified when the acceleration of tempo is halted by a Larhetto, it is hard not to believe that Ferrando is genue. Fiordiligi´s responses are tremulous; she admits defeat ("hai vinto"). The latter is enraged; Ferrando is ironic; Alfonso tells them their only revenge is to marry their "plucked crows". Women are always accused of fickleness, but he forgives them, they are not responsible for their own nature ("Tutti accusan le donne"). All three sing the motto from the overture: "Cosi fan tutte".

A reception room prepared for a wedding. An Allegro, resembling the opera´s opening number, begins the finale, as Despina orders the servants to a prepare a feast (brief choral response) and Alfonso applauds their work. The chorus greets the couples. Fiordiligi, Ferrando with Dorabella sing the toast, a ravishing canon, Guglielmo, whose range prevents him from following on, mutters curses. Alfonso enters, with Despina disguised as a notary. Coughing formally, she reads the marriage contract; the ladies sign it. But then the Act 1 march in D, associated with the officers´ departure, is heard. Consernation: their lovers are returning. The Albanians are hidden, and the men reappear jauntily as their old selves, pretend puzzlement at their reception, drag out the notary, revealed as Despina, and find the marriage contract: indignation, confession, blame (on Alfonso), threats of revenge. Returning half-changed into Albanians, Ferrando greets Fiordiligi (apparently quoting earlier music subsequently abandoned), Guglielmo greets Dorabella (quoting their love duet), and both address the flabbergasted Despina as the doctor (quoting the first finale). Alfonso calms them down; the ladies beg pardon; the men condescend to forgive, and all agree to follow Alfonso´s idea of reason: to laugh when there is cause to weep, and so find equilibrium.