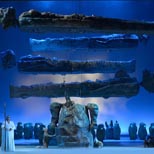 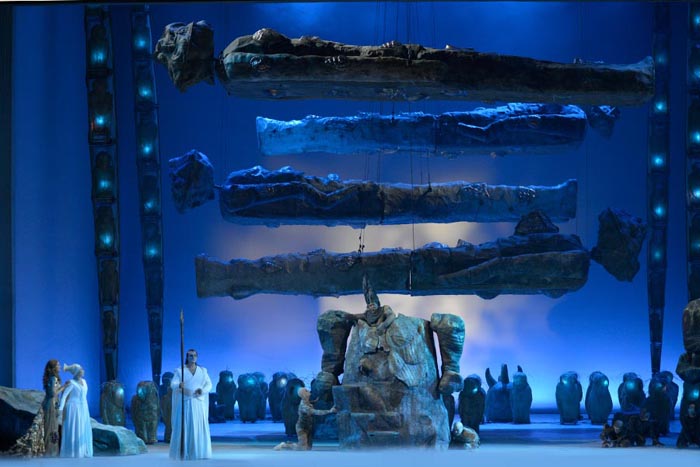 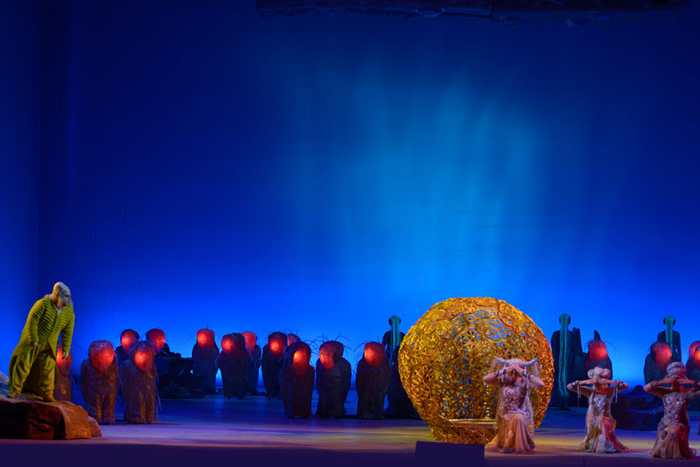 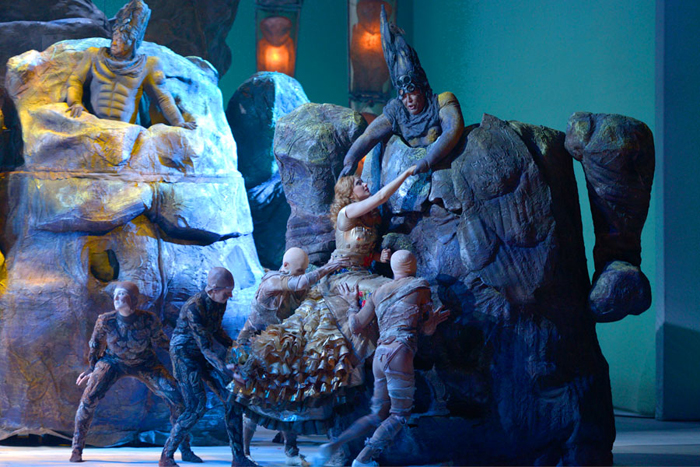 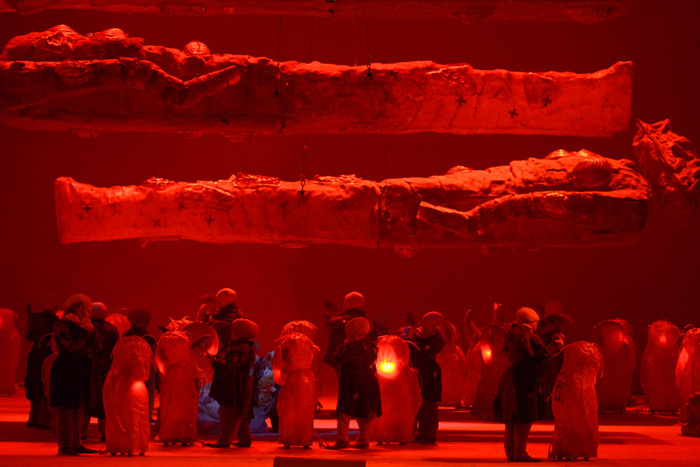 Scene I
The Rhine-maidens, Woglinde, Wellgunde and Flosshilde, are three fabulous childish beings watching over the gold of the Rhine for their father. Alberich, a miserable specimen of a dwarf, comes creeping along the rocky outcrop. He is seeking love, understanding and affection. He hopes to find these things with the Rhine Maidens, but they play a cruel game with him. Each of them artfully feigns love only to reject him mercilessly after a short time and mock his appearance. Alberich grows beside himself with rage. The sun rises. The gold of the Rhine shines brightly. From one moment to the next the Rhine Maidens forget Alberich and go about their duties as priestesses of a mystical cult. Alberich learns from them that whoever gains possession of the gold of the Rhine can forge a ring that endows him with unbridled power. That is only possible, however, after voluntarily renouncing love. The Rhine Maidens tell him all this, firmly convinced that someone as obsessed with love as Alberich could never steal the gold of the Rhine. The treatment of him by the Rhine Maidens has, however, destroyed the yearning for love in Alberich’s soul. The humiliated creature, blinded by the idea of being able to gain power over the world, renounces love. He seizes the gold of the Rhine and disappears with it into the depths of his realm, Nibelheim. The Rhine Maidens are enveloped in darkness.

Scene II
An open area high in the mountains. Wotan is sleeping. His wife Fricka is plagued by dark forebodings. She shakes her husband awake. What seemed a dream has become reality. Wotan looks at the mighty fortress of the gods that the giants Fasolt and Fafner have built on his orders. Fricka, though, can only think of the price that the gods have contracted to pay for the work: Freia, the goddess of youth, whose golden apples prevent the gods from ageing and decaying. In desperation Freia begs Wotan, her sister Fricka and brothers Donner and Froh to protect her from the approaching giants. Wotan has no intention of surrendering Freia. He places his trust in Loge, the elusive god of fire who cannot be kept in one place. Loge has promised to find a way out of the situation, but he has not yet appeared. The giants come to demand the agreed payment. Fafner does not trust the gods. He wants to have Freia in the hands of the giants so that, as the gods inevitably age, their power will also decline. Fasolt, though, has fallen in love with Freia – the first great love story in the Ring cycle. Wotan puts the giants off with excuses. Fasolt is stunned to realise that Wotan is intent on breaking the law and their agreement out of pure self-interest. At last Loge appears and upholds the justice of the giants’ demands. Wotan is beside himself. He whispers to Loge that he only entered into the contract because he had assured him of his help. That was true, Loge confirms, but only if a way out could really be discovered. In his search for a treasure that might be suitable to the giants as a substitute, however, he has found no-one willing to exchange love for property and a woman for mere goods. He did come across the Rhine Maidens, though, who informed him of Alberich’s theft of the gold. He says that they ask for Wotan’s help in recovering the gold of the Rhine, the symbol of unsullied nature. Weighed down with problems of his own, Wotan brusquely rejects any idea of involvement in the fate of the Rhine Maidens. With the giants, however, Loge’s tale of the gold of the Rhine falls on fertile soil. They express themselves willing to accept the gold as a substitute for Freia, but insist on taking the goddess of youth with them as a guarantee until the new reward is paid. Almost as soon as the giants disappear with Freia, the gods begin to age and decline. Loge knows what needs to be done. With an awareness of having moral right on his side, Wotan should take the treasure from Alberich and give the ring back to the Rhine Maidens. And so Wotan and Loge set off for Nibelheim, beneath the Earth, where Alberich reigns.

Scene III
The underground chasms of Nibelheim. The Nibelungs were once a race that obtained beautiful things from the treasures of the earth blithely for their own pleasure. Now Alberich is forcing them to exploit the Earth’s resources brutally in order to lay up ever greater stocks of riches. Mime, the Nibelungs’ skilful smith, is forced by his brother Alberich to forge a magic helmet. Mime detects the power of his creation, but cannot determine what exactly its magic is. Alberich tears the work from him and reveals its properties. This is the Tarnhelm that makes its wearer invisible. Only with the Tarnhelm can Alberich be certain of the all-embracing power of his rule, since he can now lie down to sleep reassured without having to fear that he will be robbed. Wotan and Loge appear. Loge makes up to Mime as if he is an old acquaintance. He skilfully exploits the anger, pain and hatred of the brother so recently humiliated by Alberich for the gods’ own ends. Wotan and Loge learn of Alberich’s domination of the world and of the magic Tarnhelm. Mime cowers fearfully away from the approaching Alberich. Although he encounters the intruders with deep mistrust, Alberich allows himself to be flattered into glorifying his own power with vain self-satisfaction. How though, Loge craftily inquires, does he intend to prevent those who are exploited from stealing his power out of envy? Alberich boasts of the magical properties of the Tarnhelm. Loge says that that is only words and calls for a demonstration. Alberich puts on the Tarnhelm and turns into a dragon. Loge shows that he is impressed, but insists on a further trial: it would, he says, be cleverer to turn oneself into a tiny creature so as to be able to escape quickly in the event of danger. Alberich promptly responds and assumes the shape of a toad. Wotan immediately puts his foot on Alberich who is caught. Loge pulls the Tarnhelm off him. Together with Wotan he puts Alberich in chains so he cannot turn the ring and use his power against them. Wotan and Loge drag their prisoner to the exit from his realm. The smoke of Nibelheim turns into the icy air of the place in which the family of gods that they have left behind wait, yearning for salvation.

Scene IV
An open area high in the mountains. In order to recover his freedom, Alberich has to summon his slaves who pile all his accumulated wealth at Wotan’s feet. Wotan wants the Tarnhelm too, and Loge adds it to the booty. When he demands the ring as well, though, Alberich refuses with all his might. He cries out. He himself paid for the ring with the loss of love, while Wotan is merely acting selfishly. Wotan drags the ring from Alberich’s finger. The betrayed dwarf pronounces a terrifying curse on whoever possesses the ring. Wotan is not concerned. Loge announces the success of the robbery to the family of gods. The giants return with Freia to make the exchange. Freia is to be the measure: the deal will be complete as soon as she is totally covered in gold. At the last, the Tarnhelm has to be used to compensate for Freia. One of her eyes is still showing, however, and Fasolt is unable to let her go while he can still see what he is losing. So the giants demand Wotan’s ring in order to close this last gap. Wotan’s greed knows no bounds. He would rather sacrifice Freia than the ring. Even the urgent pleas of his family and Fricka’s begging cannot make him see sense. Then Erda appears – the goddess and mother of all existence emerging from the primal soil and the subconscious. Wotan gives way in the face of her stern warning and prophetic vision of the inevitable demise of all those in power. The ring is handed over. Freia, the symbol of youth, is free and the decline of the gods is halted.
As Alberich’s curse predicted, an argument immediately breaks out over the division of the treasure. As Cain slew Abel, so Fafner kills his brother Fasolt. Fafner hastily withdraws with his booty. He will pile it in a cave, turn himself into a dragon using the Tarnhelm and allow no-one to get at his wealth. After the dreadful murder, the gods quickly return to their own affairs and prepare for a glorious entry into the newly-built fortress. Donner disperses the wreaths of mist and the bad air tainted with violence, robbery and murder. Froh creates the rainbow bridge that shows the gods the way into their new realm. A terrible and crazy idea arises in the mind of Wotan who is torn this way and that by the memory of Alberich’s curse and the fascination of his power. He gives the fortress the name Valhalla. There he will do something of which the others do not yet even dream: father a race of heroes with which he will prepare himself, regardless of the agreements and dependencies that bind him, for the last great devastating battle. The wrong Wotan inflicted upon Alberich means that the dwarf will never rest until he has recovered his ring and his power. The gods enter Valhalla. Loge comments that this is the beginning of the end. The Rhine Maidens complain despairingly of the loss of the gold. Fasolt’s corpse is left behind. He has been the first being in a henceforth seemingly endless chain of love, hope and violence to have to pay for his affection for another with his life.