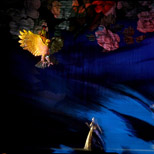 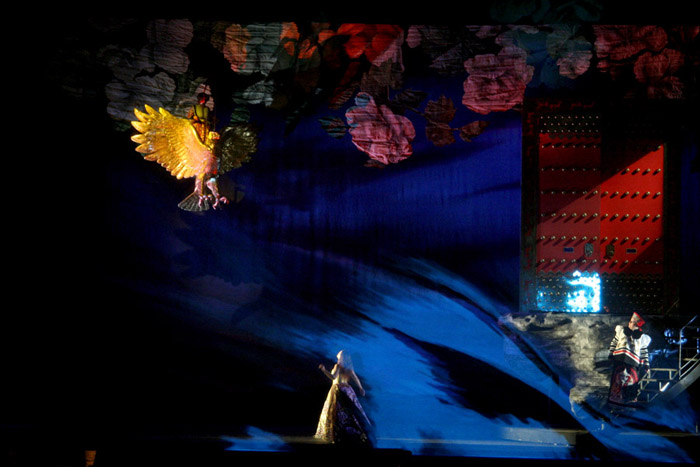 By arrangement with Fürstner Musikverlag Mainz

Act I
The Emperor of the South-East Islands is married to the daughter of a fairy that he captured while out hunting; once he injured a gazelle which transformed into the beautiful young woman.
Having become the Emperor’s wife, she did not, however, become human. She casts no shadow and so cannot become a mother. There is a connection between having a shadow and motherhood, as the former is an Omen and Destiny. The Nurse is pleased at this as she despises all that is human. Keikobad, ruler of the Spirit Realm and the Empress’ father, sends his envoy who holds talks with the Nurse. A falcon flies to the Empress, having been on a hunt with the Emperor when he shot at a while gazelle. The falcon informs her that ‘‘Time will soon run out, woman will not cast a shadow – and thus the Emperor will be turned to stone.’’ The Empress understands the allusion: she has gone beyond the confines of the demonic world, but the Emperor’s egotistical love has not surrounded her with humanity. She is between two worlds: one that does not wish to let her go, and one that will not accept her. And this curse will exert its power not over her, but rather over him. The Empress wishes to acquire a shadow whatever the cost. She is assisted in this by the Nurse, who proposes buying a person’s shadow. The Empress and the Nurse set off and come to the family of Barak the Dyer.
Barak is no longer young, but he is hale and hearty, as an ox. He works for the sake of his three brothers and his Wife, who is young and attractive but dissatisfied with her life with Barak. Children would be a divine blessing for him, though this marriage, too, has produced no children. The Empress and the Nurse ask the servant to direct them to the Dyer’s Wife.
The Nurse offers the Dyer’s Wife fine clothes and a lover in exchange for her surrendering her shadow and her fertility. With magic spells and gestures, the old procuress ensnares the young woman and the Dyer’s Wife concludes the bargain. The Empress barely understands this tainted covenant, thanks to which she will acquire her heart’s desire. But the deal is done, the guests vanish suddenly and the Dyer’s Wife is once more left alone. The voices of her unborn children can be heard coming from the pan where five fish are being fried, lamenting mournfully from the darkness. The unsuspecting Dyer returns home. Barak and his Wife each go to their separate beds.

Act II
The trials begin. The Nurse tempts the young woman with a spectre of a languishing and ardent young boy. As soon as the Dyer leaves, the youth appears in his house. Barak doesn’t know what is going on, but his kind but foolish heart becomes heavier and heavier. He feels that something is amiss, as if someone is calling on him to help. The Empress is involved in this evil scheme. At night, in fear-filled dreams she sees her husband walking through an empty forest, alone, eaten up by egotistical suspicions. His heart has already turned to stone. She awakes from her prophetic dream, but her days are more dangerous than her nights. There is no room for a creature from the Spirit Realm in the world of men. Gradually the Empress overcomes her fears and begins to sense her guilt before Barak. The third night falls: The Nurse, in order to complete the pact, calls on devilish forces for help. Heavy mists descend all around. A cry of horror emerges from the mouths of Barak’s brothers, while the lips of Barak’s Wife produce insane, wild words. She accuses herself of something she has not yet done – of marital infidelity – and says that she has sold her shadow and spurned her unborn children. The brothers light a fire and become convinced of what has been said: the young woman stands before them as a witch, casting no shadow. The Nurse rejoices – the pact has come into force. One has surrendered her shadow; the other must take it for herself. At this terrible and decisive moment, Barak seems to grow taller; his lips, which to this point have uttered no wicked word, pronounce the death penalty on his Wife. A glittering sword appears in his hands. At the sight of the sword, the Nurse understands that higher forces have entered the game, ones with which she cannot compete. Instead of grabbing the shadow, the Empress drags the Nurse away to avoid being spattered in human blood. The Wife falls at Barak’s feet, in supplication and in mad frenzy holds the sword above her own self. The fates are woven together and voices drown each other out – everything around is suddenly under some magic power. The Earth rotates and swallows man and wife; Barak’s house crashes to the ground. A huge swell of water rises from the depths. The Nurse, shielding the Empress with her cloak, seats her in a boat that has magically appeared.

Act III
The first trial has been completed, and those who have completed it set out for The Spirit Realm. The boat with the Empress and the Nurse arrives at the gates of the Temple. She knows: she is being called to judgement. In the depths, utterly unaware of one another, Barak and his Wife are struggling in their confinement. The voice of one of the spirits calls them upwards. They rise and think of one another with tenderness: he forgiving her, and she begging forgiveness, humbly and, for the first time, lovingly. They rise above, trying to find each other. Here they meet the Nurse, standing before the closed gates of the Temple. The messenger of the spirits guards the entrance from her. She is infuriated. The Empress is standing in the depths of the Temple and awaits the court. But who is it that will judge her? Is it the King of Spirits, her stern father? A curtain screens his face. The Empress’ courageous supplication goes unanswered. There is only the gentle gurgling of the water of the Golden Source, the Source of Life.
‘‘Drink,’’ says a voice, ‘‘Drink, and the Wife’s shadow will be yours.’’ The Empress hears the voices of the separated man and wife and steps back without having let her lips touch the Golden Source. The waters recede. The Emperor sits upon a stone throne, unmoving, turned to stone. It is only in his eyes, it would appear, that life still lingers. The Source of Life again begins to ring out at the statue’s feet. Sweet voices from above can be heard: ‘‘Say ‘I want it’ and the woman’s shadow will be yours, it will rise, come to life and go with you.’’ The Empress freezes to the spot, battling with her own self. The barely heard words ‘‘I don’t want it!’’ at last come from her lips. She is victorious, as the mother before the throne of Solomon was victorious, prepared to lose her child that he might live. She is victorious for her own self and for the sake of one who would, without her self-sacrifice, otherwise remain petrified forever. And for the sake of two others who, having suffered so much, must rise upwards. A distinct shadow falls on the floor of the Temple. The voices of the unborn children can be heard rejoicing.