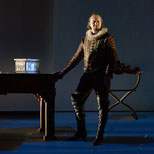 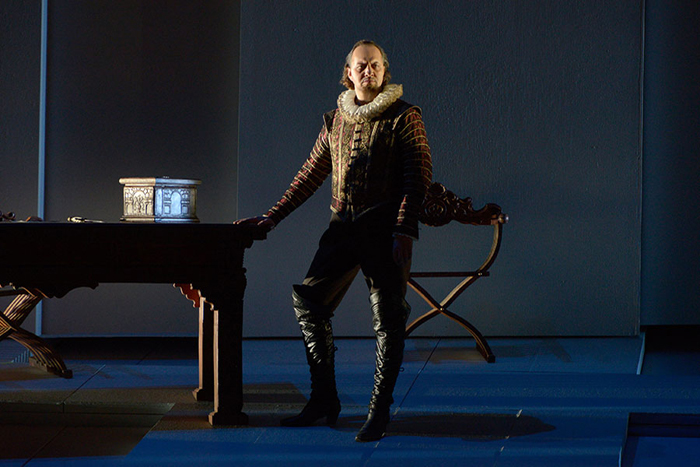 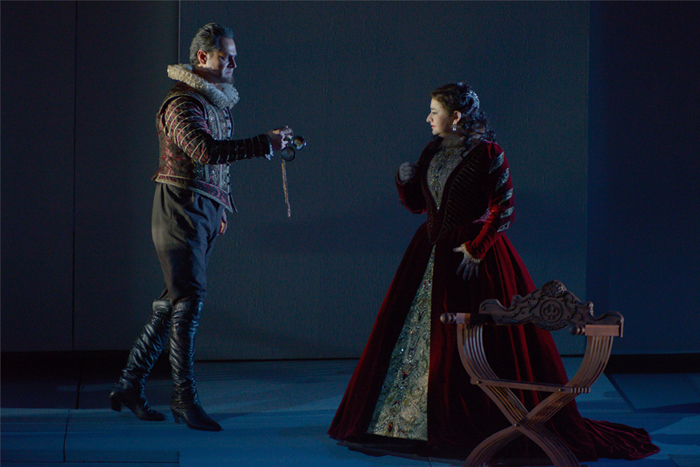 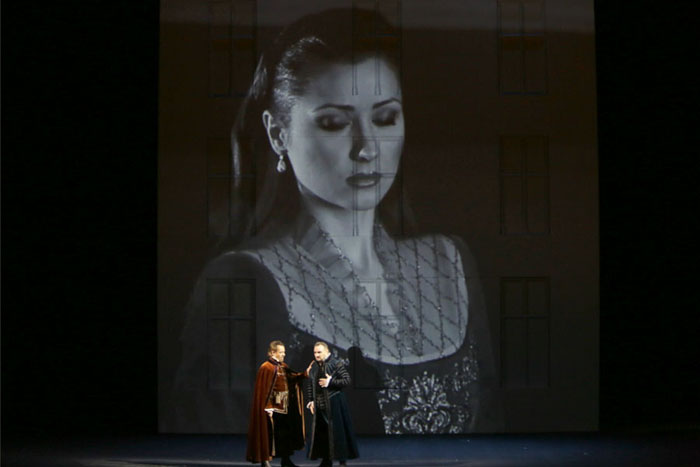 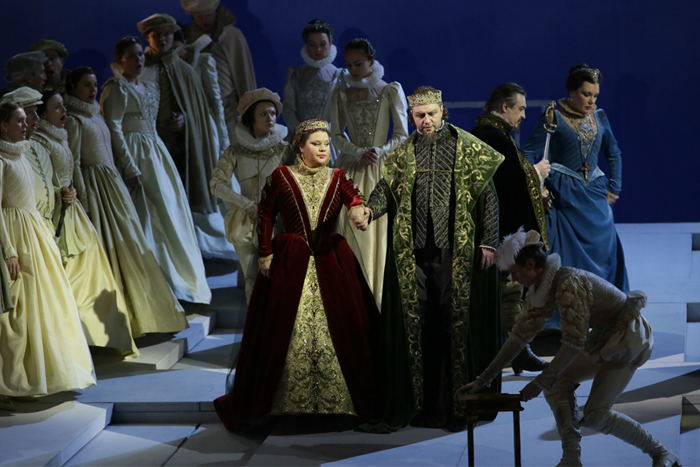 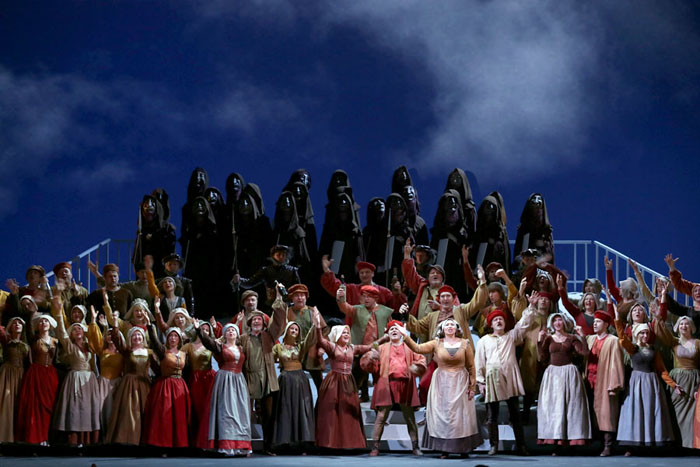 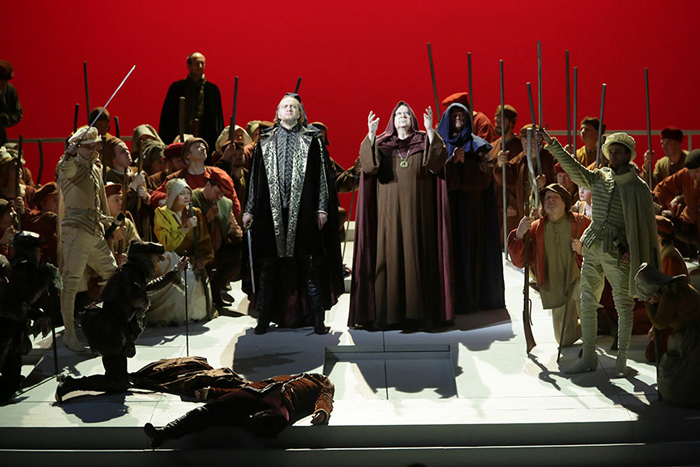 Act I
The forest of Fontainebleau
While hunting in the forest of Fontainebleau, Don Carlo meets the French Princess Élisabeth de Valois. They are engaged though they have never seen each other before. Élisabeth has been promised to Don Carlo by her father who wishes to establish a long-awaited peace between Spain and France by the union.
Love becomes apparent when the two young people meet, but their joy is short-lived. Soon the Spanish Ambassador the Count of Lerma appears with some terrible and unexpected news: Philip II has annulled the engagement of Carlos and Élisabeth and will marry her himself. Realising that peace between the two countries depends upon her, Élisabeth gives her consent.

Act II
Scene 1
The cloisters at the monastery of Saint-Just
Monks meditate by the tomb of Emperor Charles V, Don Carlos’ grandfather. Carlo is startled by the resemblance of one of the monks to Charles V. He is joined by his dearest friend Rodrigo, the Marquis of Posa, who has just returned from Flanders; Posa paints a grim picture of the oppression it suffers, and when he hears of Carlo’s love for Élisabeth he urges Carlos to go to Flanders and ease the suffering of the people and cure himself of his criminal passion. They renew their vows of fellowship in the service of liberty.

Scene 2
The garden by the gates of Saint-Just
Tebaldo, Eboli and the ladies of the Court take shelter from the heat and pass the time singing. The Queen joins them, followed by di Posa who delivers two letters, one from her father and the other from Carlo. As Élisabeth reads, Rodrigo engages Eboli in gallantries. He asks the Queen for an audience with the Infante to whom the King has been rather cool. Eboli imagines Carlo may be in love with her. Carlo appears and, dismissing her attendants, Élisabeth struggles to remain calm; she agrees to help persuade the King to send his son to Flanders. Carlo, however, is unable to resist and declares his ardent love for her. After Don Carlo departs King Filippo enters. Finding the Queen unattended and alone, something inadmissible for Court etiquette, the furious Filippo orders the guilty lady-in-waiting, the Countess d’Aremberg, back to France; Élisabeth bids her farewell sadly. Di Posa is summoned by the King and seizes the opportunity to protest about the plight of Flanders; he urges him to give the people their freedom. Impressed by di Posa’s integrity and sincerity, Filippo warns him to be wary of the Grand Inquisitor and confides his worries about Carlo and Élisabeth, asking him to keep watch on them.

Act III
Scene 1
A sheltered grove in the Queen’s gardens
At midnight Don Carlo, who has received an anonymous message and believes it to be from the Queen, strolls in the garden. Someone dressed as the Queen appears. The young man ardently declares his passion, but falls silent when he realises it is Eboli in disguise. When Eboli realises that his declarations were not intended for her she wrathfully promises to have her revenge on both. She threatens to tell Filippo about the Infante’s criminal love for the Queen. Carlo is assisted by Rodrigo. He threatens to kill Eboli, but the Princess cannot be placated. Rodrigo asks Carlo for all the documents that compromise him.

Scene 2
The piazza in front of the cathedral in Valladolid
Flemish Protestants are being burnt on the square, heretics in the eyes of the Catholic church. A throng of people, gathered to view this cremation, sings the King’s praises. Carlo comes to Filippo with a deputation from Flanders and Brabant: the Flemish beg Filippo to show clemency, a prayer in which the Queen, di Posa and most of the crowd join; but Filippo’s persecuting obduracy is encouraged by the monks. Carlo now demands that his father entrust to him the regency of Flanders; when Filippo dismisses the request, the Infante draws his sword and vows to be the saviour of unhappy Flanders. All are scandalised. Di Posa disarms Carlo and is elevated to the rank of Duke by Filippo in thanks. The auto-da-fé continues; a heavenly voice is heard comforting the dying.

Act IV
Scene 1
The King’s chambers in Valladolid
Filippo muses wretchedly over his failure to win Élisabeth’s love. The Grand Inquisitor is led in; he assures the King that, if it is for the good of the faith, there can be no objection to having Carlo killed. But Rodrigo, he believes, represents a greater danger, and if Filippo persists in protecting a heretic he will have to answer for it to the Holy Church. Élisabeth runs in in confusion; her jewel box has been stolen. Suddenly she sees it on the King’s table. Élisabeth refuses to open it and then Filippo forces it himself to discover a portrait of Carlo among her treasures. He denounces the Queen as an adulteress and she faints. At the King’s summons Eboli and Rodrigo enter; he realises that immediate action must be taken. Left alone with the Queen, Eboli admits her love of Don Carlo and says it was she who stole the jewel casket. She begs forgiveness. The Queen banishes her from the Court: she must choose exile or the cloister. Eboli curses her own beauty; before taking leave of the world she resolves to save Carlo.

Scene 2
Carlo’s prison cell
The Marquis di Posa enters. He says he has accepted Carlo’s guilt as his own and declared the Infante’s secret papers, found on the former, to be his. The Marquis bids his friend farewell and encourages him again in his mission to free Flanders. Two men appear at the cell door and Rodrigo is shot. As he dies, he tells Carlo that Élisabeth will be at Saint-Just the next day. The King enters and states that Carlo has been declared innocent, but his son repels him. The clanging of the tocsin signals a popular uprising: for a moment Filippo seems to be in danger, but the appearance of the Grand Inquisitor reduces the mob to submission. Meanwhile Eboli enables Carlo to make good his escape.

Act V
The monastery of Saint-Just
Élisabeth recognises that her earthly mission will soon be over. Carlo comes to bid farewell to his beloved; Élisabeth blesses his Flanders mission, and they look forward to meeting again in a better world. The King appears, attended by the Grand Inquisitor and his officers; Carlo is anathematised. As he tries to evade the inquisition he retreats towards Charles V’s tomb, which suddenly opens up; a monk appears and is recognised as the late Emperor. He hurries Carlo away into the monastery.