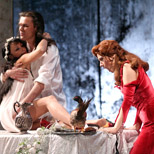 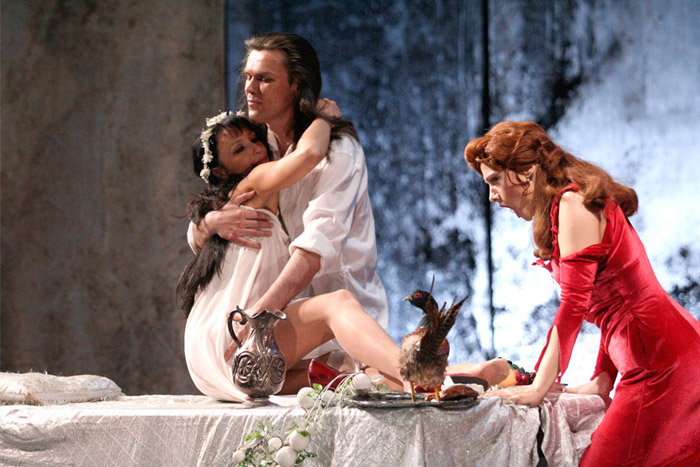 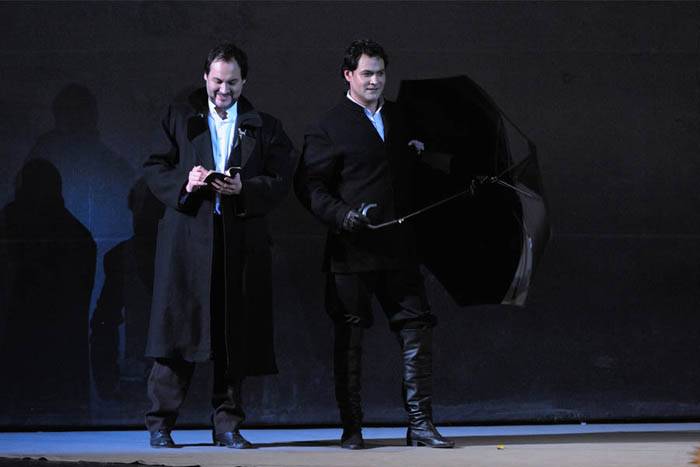 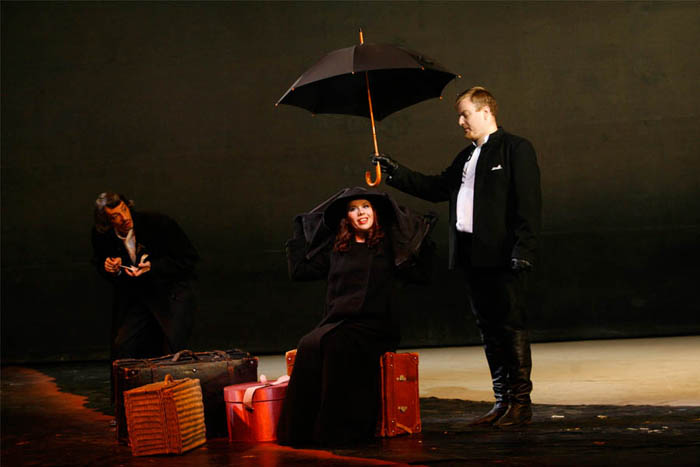 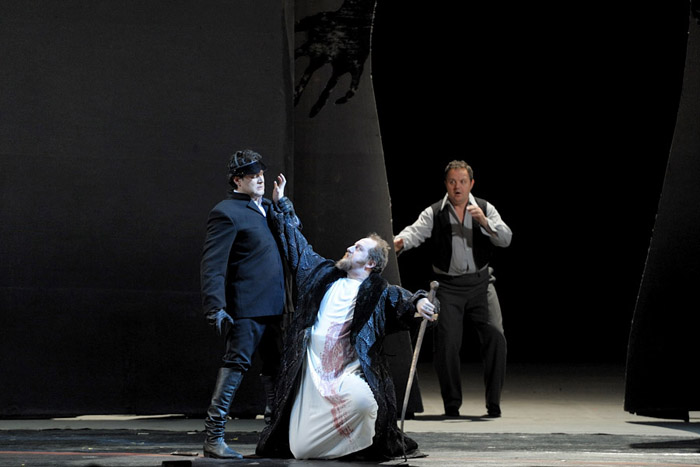 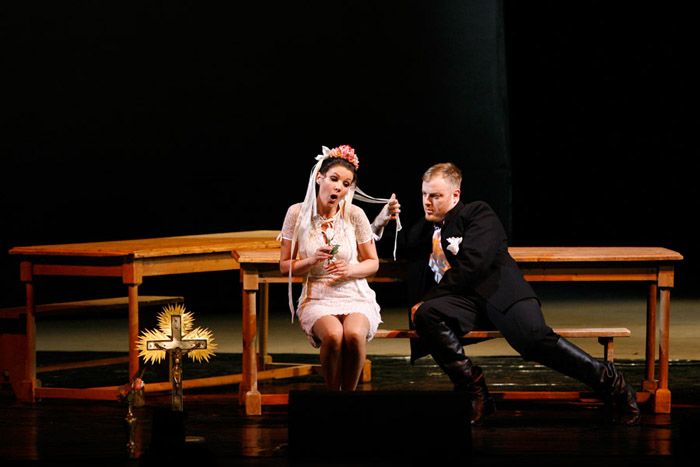 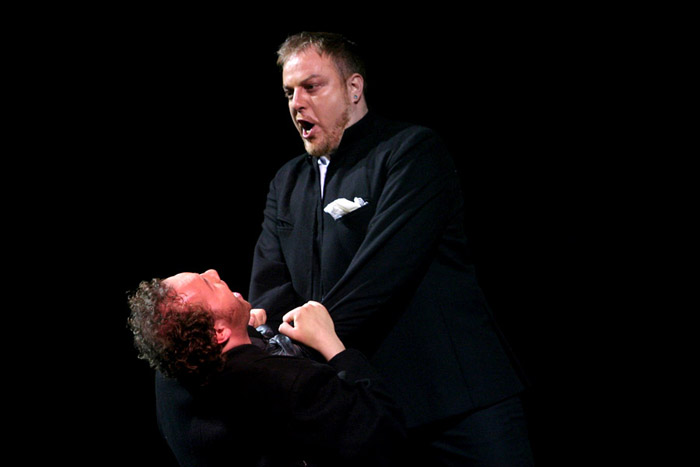 Act I
Leporello is waiting outside the Commendatore’s house for his master, Don Giovanni, who has slipped clandestinely into the bedroom of the Commendatore’s daughter, Donna Anna. Don Giovanni suddenly rushes out of the house, pursued by Donna Anna, who wants to know, no matter what, who her unexpected night-time visitor was. She unsuccessfully tries to tear off Don Giovanni’s mask. The Commendatore appears, having been woken up by the commotion, and challenges the uninvited guest to a duel. At first unwilling to accept the challenge, Don Giovanni all the same kills him and then escapes together with Leporello; Donna Anna and Don Ottavio, her fiancé who has appeared in time to help her, swear to take revenge on the unknown murderer.
Don Giovanni is daydreaming about further amorous adventures. In the faint light of dawn a beautiful stranger attracts his attention. As he approaches her he recognises Donna Elvira, his former love, whom he abandoned three days after their wedding. In an attempt to escape her tedious reproaches, he leaves Donna Elvira in the care of Leporello, who readily relates to her a list of his master’s amorous conquests.
Peasants are celebrating the wedding of Zerlina and Masetto. Zerlina immediately catches Don Giovanni’s eye. In an attempt to get her on her own, he orders Leporello to take all of those present to his castle. Zerlina’s bridegroom tries to resist but is forced to give in to Don Giovanni’s threats. Don Giovanni distracts Zerlina with tender words and promises. However, at the most inopportune moment, Donna Elvira appears, followed by Donna Anna and Don Ottavio. Don Giovanni declares Donna Elvira to be insane. Alone with Don Ottavio, Donna
Anna confesses that she recognised her seducer of the night in Don Giovanni. She appeals to her fiancé to seek revenge.
Leporello reports to Don Giovanni how he has dispatched everyone to the feast at the castle and how he managed to get rid of Donna Elvira. Zerlina tries to calm the furious Masetto. Don Giovanni finds he is unable to be alone with Zerlina and is thus forced to join in the festivities with the bride and groom. Donna Anna, Donna Elvira and Don Ottavio appear, their faces hidden by masks. On the orders of his master, Leporello invites the masked visitors to join in the feast, during which there are to be no social distinctions between those present. Don Giovanni invokes everyone to act with utter freedom. The appeal is readily taken up but each person interprets freedom in his own way. In the chaos of the ensuing celebratory tumult Don Giovanni draws Zerlina away from the hall. The party is suddenly interrupted by Zerlina’s screams for help. Don Giovanni, annoyed, blames his servant for what has happened. Don Ottavio, Donna Anna and Donna Elvira remove their masks and accuse the real villain. Don Giovanni is forced to flee.

Act II
Leporello wants to leave Don Giovanni´s service. However, the money which Don Giovanni offers him persuades him to change his mind. Even in moments of peril, the untiring libertine remains true to his ways. He thinks up the idea of seducing Donna Elvira´s maid. But in order to get to her, he has to distract her mistress, and so Don Giovanni and Leporello swap clothes. Donna Elvira takes Leporello for Don Giovanni. Not realising she is speaking to the servant and not the master, Donna Elvira forgives Don Giovanni for the hurt he has caused her. Don Giovanni meets some peasants who are looking for Zerlina´s seducer on Masetto´s command. Disguised as Leporello, he sends them off on a false trail. Left alone with Masetto, Don Giovanni cruelly beats up the simpleton and steals away. Zerlina arrives and tends to her bridegroom´s wounds and comforts him.
Leporello in vain tries to get away from Donna Elvira. Finding himself in a difficult situation, surrounded by pursuers who believe him to be Don Giovanni, he is forced into revealing his face. Donna Elvira is mortified to the bottom of her soul. Taking advantage of the general confusion, Leporello disappears. Don Ottavio is determined to hand over the Commendatore´s murderer for trial.
Donna Elvira, inextricably caught up in the fate of her unfaithful lover, begins to lose her reason.
Don Giovanni and Leporello, hiding from their pursuers, find themselves in the graveyard as night falls. Their discussion is unexpectedly interrupted by ominous comments from the statue of the Commendatore. Don Giovanni makes his servant invite the statue to dinner. Donna Anna finds a way of evading Don Ottavio´s advances. There is no longer any place for men in her heart.
At midnight, Don Giovanni has dinner served, and the Commendatore has been invited. Donna Elvira tries, for the last time, to appeal to Don Giovanni to lead a righteous life. However, he remains intransigent to the end. He fearlessly holds out his hand to the statue of the Commendatore, before which Leporello experiences insurmountable dread. Impenitent, Don Giovanni crashes down to Hell.
Donna Anna, Donna Elvira, Don Ottavio, Zerlina and Masetto arrive to deliver Don Giovanni for trial. Leporello announces the news that his master has plunged down to the underworld. Wishing to create a sensation, he describes in detail what he has not even seen because he was too scared to watch.