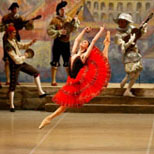 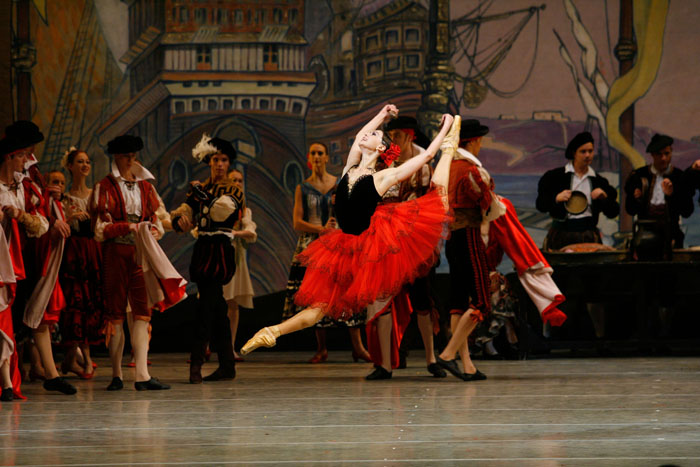 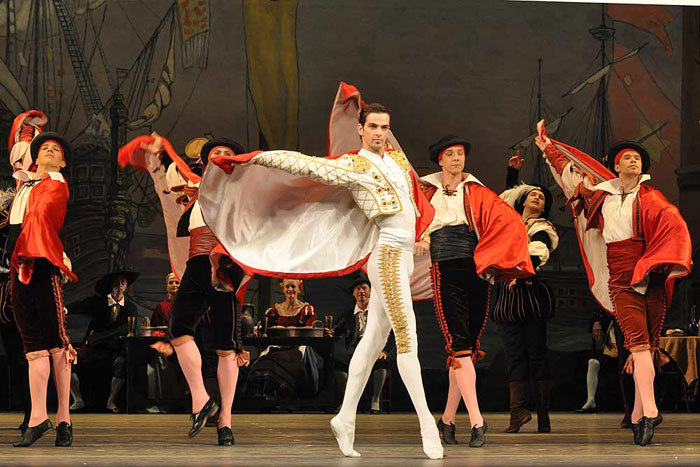 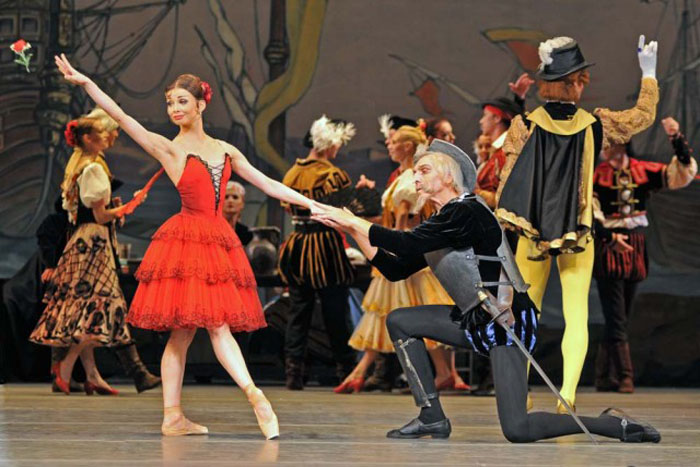 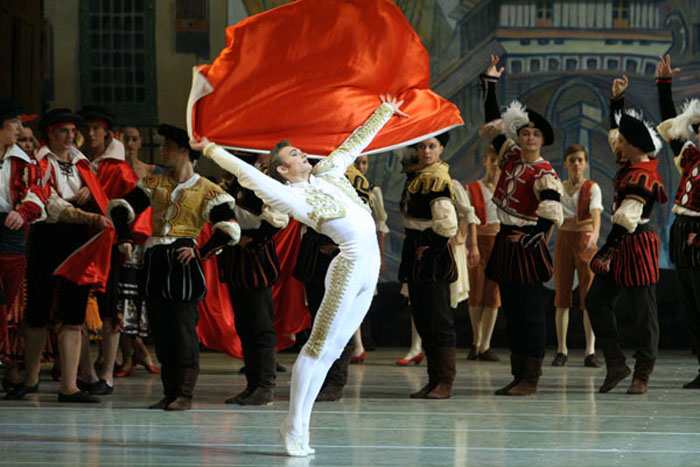 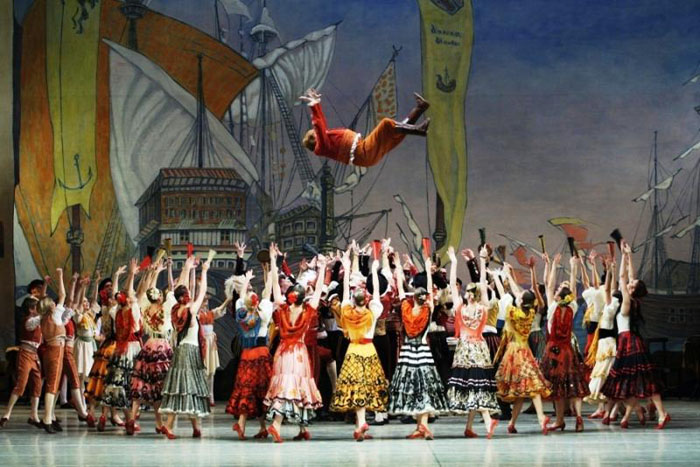 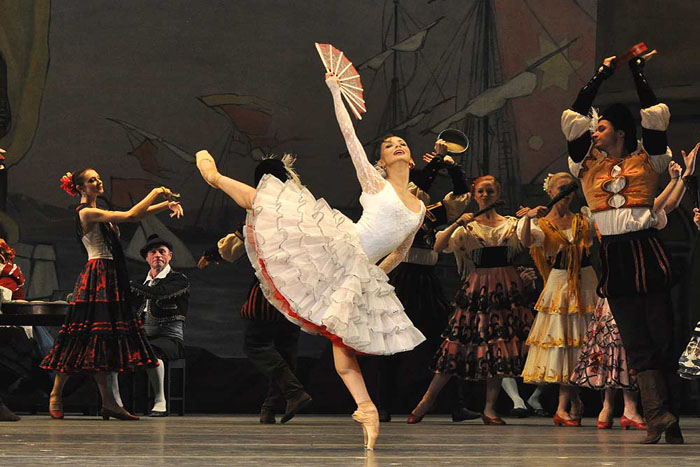 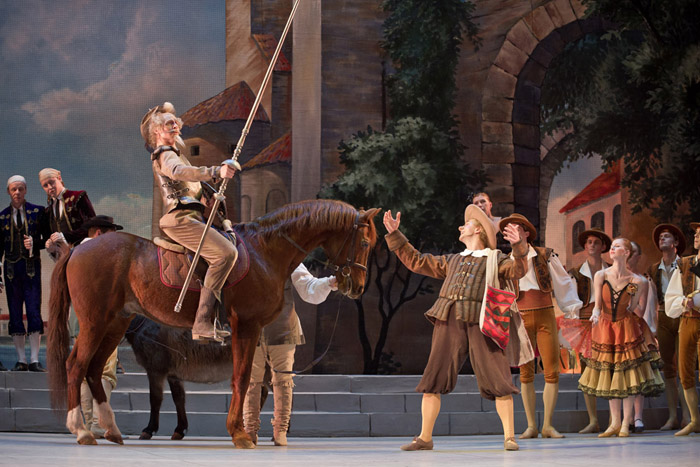 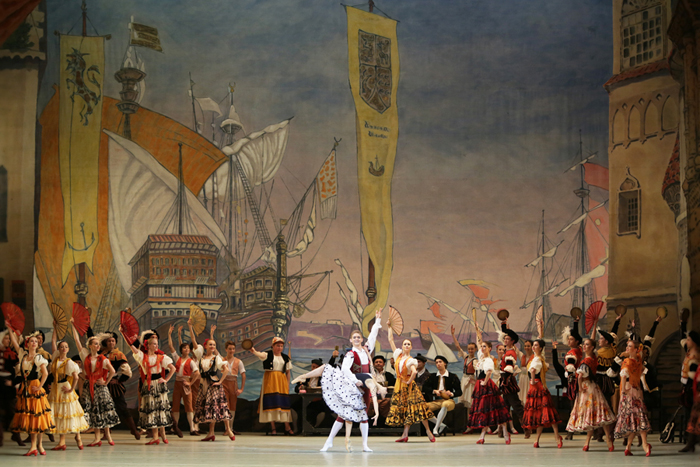 History of this play

Prologue
A room in Don Quixote’s house
Having read some tales of chivalry, Don Quixote decides to set out in search of adventures, defend virtue and punish those who violate the code of honour. It occurs to him to make his servant Sancho Panza his armour-bearer.

Act I
Scene 1.
In  front of Lorenzo’s inn in Barcelona, a holiday crowd has gathered.
Also there are Kitri, the flirtatious daughter of the innkeeper, and her lover Basilio, the barber, who has come to tease her; Basilio is over-attentive to Kitri’s friends.
Lorenzo catches his daughter kissing Basilio and forbids them ever to meet again; he won’t have any penniless suitors. In  vain Kitri tells her father how much she loves Basilio, but Lorenzo is implacable and turns the barber out of the house. Gamache, a rich and pompous nobleman, walks in, resplendent in his brocaded clothes. The crowd jeers at him. He has come to ask for the hand of the beautiful Kitri. Lorenzo would be delighted to have so highborn a gentleman for a son-in-law, but to Kitri the idea of marrying him is detestable. The innkeeper is shocked at his daughter’s impertinent manner towards Gamache.
A street dancer enters, cheered heartilyby the crowd. The girl is eagerly awaiting the arrival of Espada, the famous toreador. Espada appears, accompaniedby other toreadors. They dance, flourishing their cloaks, enacting scenes from a bullfight.
At the appearance of an extraordinary-looking horseman, the people are struck with astonishment. Sancho Panza blows a horn to announce the arrival of the knight-errant of la Mancha. Lorenzo welcomes the traveller courteously and invites him to partake of some refreshment. The girls seize the opportunity to have a bit of funby playing tricks on the fat armour-bearer. They start a game of blind-man’s-buff. After that, the poor, harried Sancho becomes sport for the men, who toss him in the air. Sancho screams for help. Don Quixote comes to his rescue, armed with a huge toasting-fork and a plate for a shield.
The knight sees Kitri and is struckby her beauty. Is it not she who has haunted his dreams as the beautiful Dulcinea? In  rapture, Don Quixote bends down on one knee and asks her to dance a minuet with him. To annoy Basilio, Kitri graciously accepts the invitation, flirtatiously imitating the manners of a fine lady.
While no one is looking, Sancho steals a fried fish from the kitchen and is about to slip away, but the scullions give chase and catch the thief. Amidst the general confusion, Kitri and Basilio slip away unobserved.

Act II
Scene 2.
Fleeing from Lorenzo and Gamache, the two lovers, Kitri and Basilio, wander into a gypsy camp. The gypsies dance for their guests. A girl informs them of the approach of a queer-looking horseman – it is Don Quixote. Basilio and Kitri greet him like old friends.
The gypsies invite Don Quixote to attend a play they are about to perform. He takes what is happening on stage to be reality, and rushes, sword in hand, to rescue the unhappy heroine; the improvised theatre is destroyed. The frightened actors and spectators scatter in all directions. The turning sails of a windmill then catch Don Quixote’s eye. They are the arms of giants! Don Quixote attacks the windmill. His clothes get caught on a sail and he is first swung up into the air, then hurled to the ground. Kitri and Basilio attend to his injuries. They spend the rest of the night restingby the gypsies’ caravan.
Scene 3.
Don Quixote is tormentedby a nightmare. In  his sleep, he sees a huge spider crawl out of a dark, dense forest. The knight boldly attacks the monster and overpowers it. At the same moment, the forest is transformed into the beautiful Kingdom of the Dryads. Among them is Kitri, who has assumed the form of Dulcinea, the queen of his heart. Amour presents Don Quixote to the Queen of the Dryads. The nymphs are grateful to him for rescuing them from the power of the monster and dance for their deliverer.
Scene 4.
Morning breaks and Kitri and Basilio wake up only just in time, for Lorenzo and Gamache are close upon them. The lovers flee. Don Quixote, their protector, sends Lorenzo and Gamache on a false trail, but Sancho Panza corrects his master’s “mistake”. The chase goes on.

Act III
Scene 5.
People are gathering for a fiesta at an inn. Kitri and Basilio, having given Lorenzo and Gamache the slip, have also come here to take part in the merrymaking. The toreador and Mercedes the dancer enter, hailed heartilyby the crowd. The innkeeper warns Kitri of her father’s approach; Kitri tries to escape, but her father overtakes her and drags her to Gamache to give them his parental blessing at their betrothal. Gamache kneels before Kitri.
Basilio, seeing this, stabs himself and falls to the ground. Kitri rushes to him. She guesses at once that he is pretending, but slyly begs Don Quixote to go to Lorenzo and persuade him to grant Basilio’s dying wish – to give their love his blessing. Basilio is sure to die. Why not ease his last moments?
Gamache protests, but is driven out unceremoniously. At Don Quixote’s earnest entreaty, Lorenzo blesses the lovers. The very next instant, Basilio jumps to his feet and kisses the astounded Lorenzo. The merrymaking at the inn continues late into the night.
Scene 6.
Lorenzo, assistedby the scullions, the maidservants and Kitri’s friends, is putting the final touches to the wedding feast. Don Quixote is the guest of honour. The happy lovers dance for him. Wishing the newly-weds every happiness, the knight-errant departs in search of new adventures.