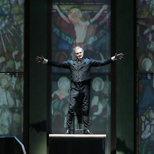 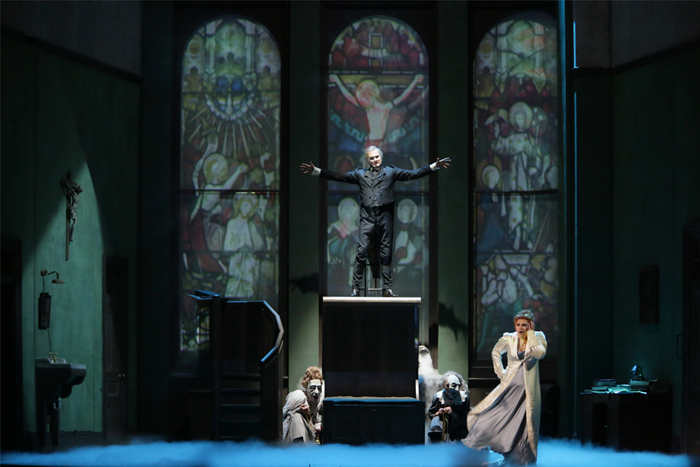 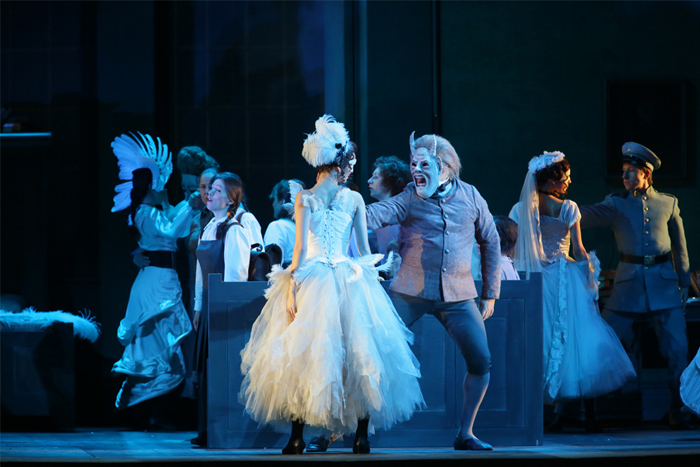 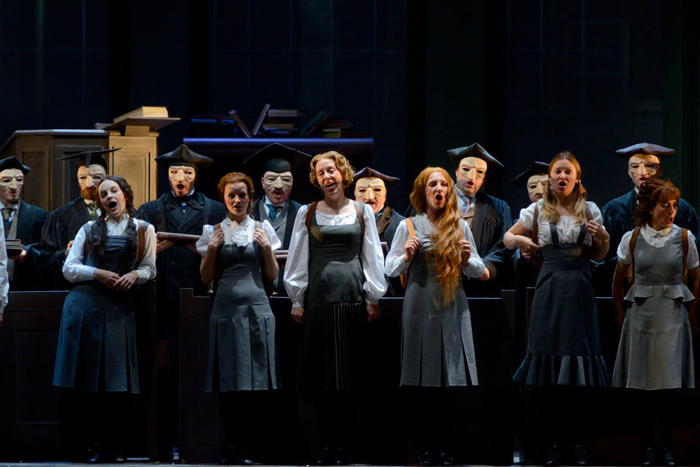 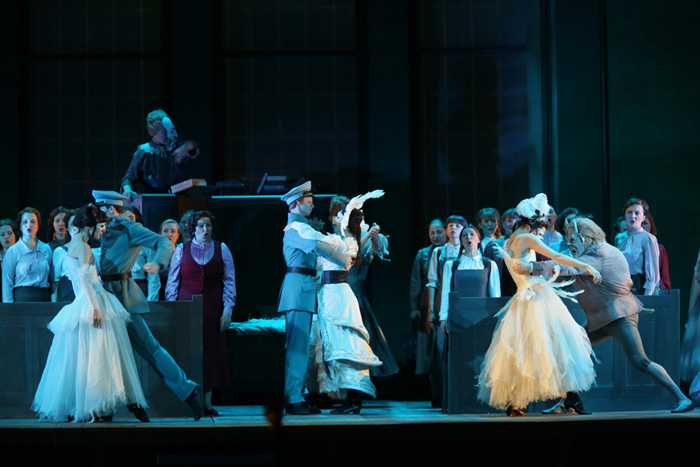 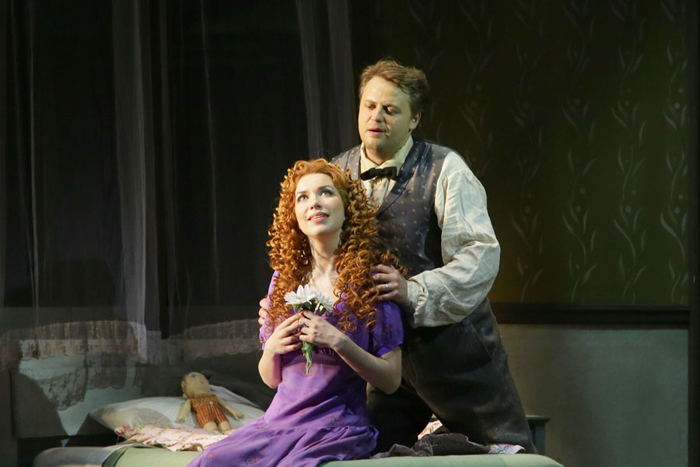 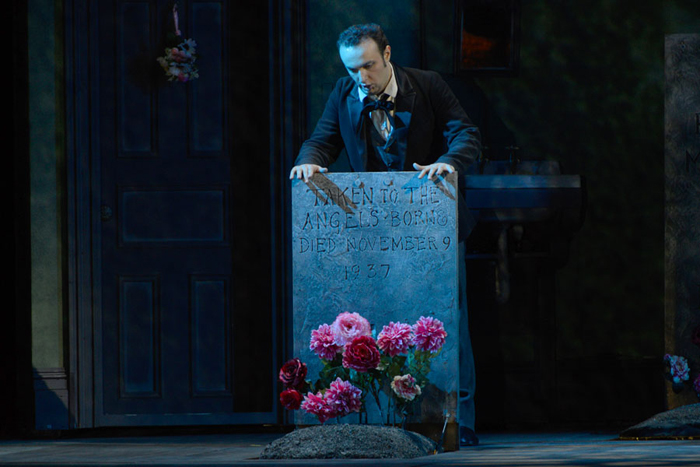 Act 1
Faust, an aging professor, despairs that his life has been wasted, since his studies, and religious faith have not given him the answers he was looking for (Rien! En vain j'interroge). He prepares to kill himself with poison but hesitates in doubt. He curses science and faith, and asks for infernal guidance. Méphistophélès appears (duet: Me voice) and, with a tempting image of young Marguerite at her looking glass, he persuades Faust to buy Méphistophélès's services on earth in exchange for Faust's in Hell. Faust's glass of poison becomes an elixir of youth, making the middle-aged doctor feel young; the strange companions then set out into the world.

Act 2
A chorus of academics, soldiers and students sing a drinking song (Vin ou Bière). Valentin, Marguerite’s brother, is soon leaving for war and he entrusts the care of his sister to her friend Siébel (O sainte médaille ... Avant de quitter ces lieux). Méphistophélès appears and sings a rousing, irreverent song about the Golden Calf (Le veau d'or) and after, provides the uneasy crowdwine. Méphistophélès maligns Marguerite, and Valentin tries to strike him with his sword, which shatters in the air. Valentin uses the cross-shaped hilt of his sword to fend off what they now fear is an infernal power (chorus: De l'enfer). Méphistophélès is joined by Faust and the young girls in a waltz (Ainsi que la brise légère). Marguerite appears briefly and Faust attempts to charm her, but she refuses his offer to walk her home out of modesty.

Act 3
Siébel leaves a bouquet for Marguerite (Faites-lui mes aveux). Méphistophélès insists in searching for a  more tempting gift for Marguerite and Faust sings a cavatina (Salut, demeure chaste et pure) idealizing Marguerite as a pure child of nature. Méphistophélès returns with a beautiful box containing exquisite jewelry and Faust leaves it on Marguerite's doorstep, near Siébel's flowers. Marguerite enters, pondering her encounter with Faust, and sings a melancholy ballad about the King of Thulé (Il était un roi de Thulé). Marthe, Marguerite's neighbour, notices the jewelry and says it must be from an admirer. Marguerite tries on the jewels and is captivated by how they enhance her beauty, as she sings in the famous aria, the Jewel Song (Ah! je ris de me voir si belle en ce miroir). Méphistophélès and Faust join the women, Mephistopheles distracts Marthe and leaves Faust to seduce Marguerite. Marguerite eventually allows Faust to kiss her (Laisse-moi, laisse-moi contempler ton visage), but then in panic demands he goes away. She sings at her window of her interest in him, and Faust, listening, returns. Under the watchful eye and malevolent laughter of Méphistophélès, it is clear that Faust's seduction of young Marguerite is achieved.

Act 4
After being impregnated and abandoned by Faust, Marguerite is a social outcast. She is alone in her room (Il ne revient pas). Siébel visits and stands by her. Marguerite goes to the church and tries to pray there but is frightened, first by Méphistophélès and then by a choir of demons. She finishes her prayer but faints when she is cursed again by Méphistophélès. The scene shifts to the return of the soldiers - Valentin's company returns from the war to a military march (Deposons les armes and Gloire immortelle de nos aïeux). Siébel tries to keep Valentin from Marguerite as she is afraid he will punish her, but after looking for her in the church he returns to Marguerites room and breaks in. While he is inside Faust and Méphistophélès appear, and Méphistophélès sings her a mocking burlesque of a lover's serenade (Vous qui faites l'endormie). Valentin emerges from her room, furious at what has happened to Marguerite and suspecting that it is Faust who has debauched his sister. The men fight, Méphistophélès blocking Valentin's sword, allowing Faust to make the fatal thrust. With his dying breath Valentin blames Marguerite for his death and condemns her to Hell (Ecoute-moi bien Marguerite).

Act 5
Méphistophélès and Faust return to  visit Marguerite. Outside is Siebel, asleep, guarding her friend. Faust retrieves the key from the sleeping figure and enters Marguerite’s room. He sees she is in a terrible state, bleeding and pale, and may die. He and Marguerite sing a love duet (Oui, c'est toi que j'aime). Méphistophélès states that only Faust can deliver Marguerite from her fate, and he tries to help her, but she prefers to trust her fate to God and His angels (Anges purs, anges radieux). At the end she asks why Faust's hands are covered in her blood, pushes him away, and collapses. Méphistophélès curses, as a voice on high sings "Sauvée!" ("Saved!"). The bells of Easter sound and a chorus of angels sings "Christ est ressuscité!" ('"Christ is risen!"). And Marguerite's soul rises to heaven. In despair Faust follows it with his eyes; he falls to his knees and prays.