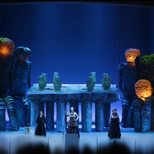 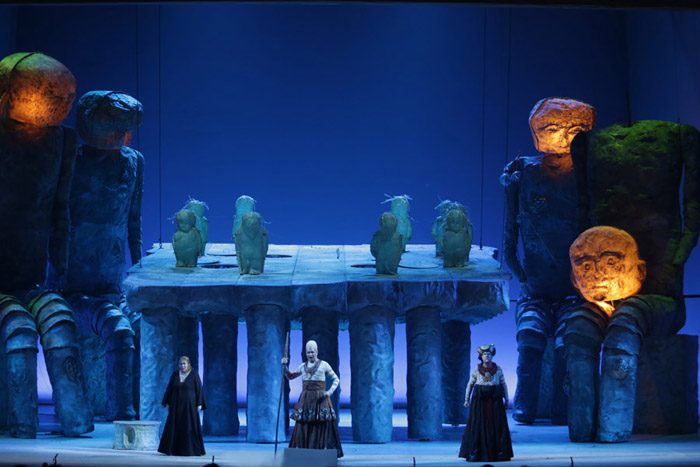 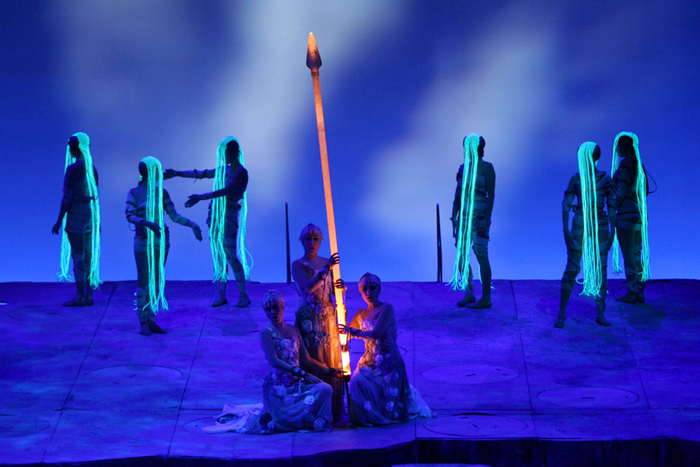 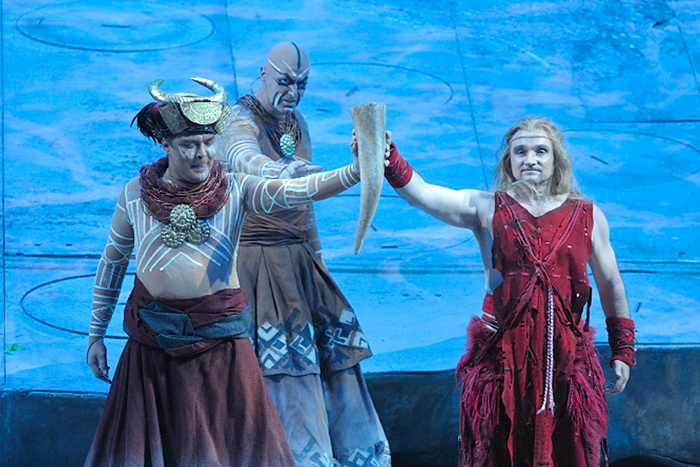 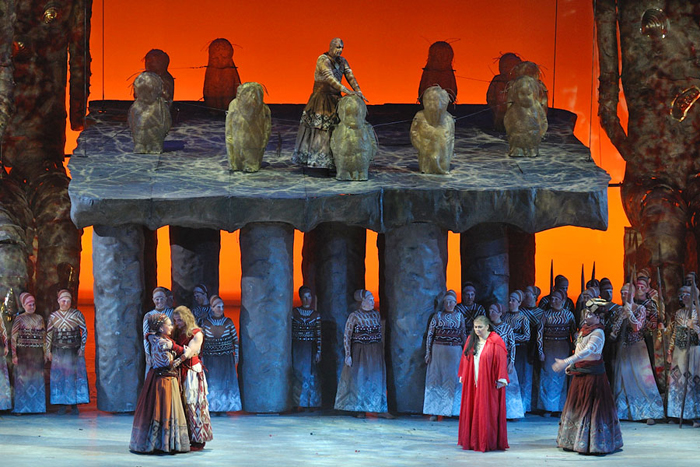 Prologue
By night on the rocky banks of the Rhine, three prophetic Noms are spinning the rope of Fate. The end of the gods´ power is nigh: in the castle of Valhalla, the supreme god Wotan is surrounded by gods and heroes, waiting for the last day. His death has been predestined by a chain of crimes, the first of which was Alberich´s stealing the gold of the Rhine and renouncing love. Wishing to hold sway over the earth, Alberich forged a ring from the gold of the Rhine, but the Ring was then stolen. There is now a dreadful curse on the Ring, which will bring about the death of anyone who wishes to possess it. Unexpectedly the rope of Fate breaks – the Norms´ prophetic knowledge has run out and they disappear. Dawn. Illuminated by the sun, Siegfried and Brunnhilde emerge from the cave. Departing for new conquests, Siegfried swears eternal love to his bride and, as a token of that love, gives her the Rng of the Nibelung. Brunnhilde brings Siegfried her horse Grane he sets off along the Rhine below.

Act I
The castle of the Gibichungs on the banks of the Rhine. Gunther lives there with his sister Gutrune and sly and sullen half-brother Hagen, half-man and half-gnome, the illegitimate son of his mother and Alberich the Nibelung. Gunther, a noble warrior, has amassed great power, though he has not found a suitable wife. Hagen tells him Brunnhilde, adding, however, that Siegfried alone will be able to reach her though the fire. Siegfried must be made to drink magic potion which will make him forget Brunnhilde, who will then become Gunther´s bride. Siegfried´s horn can be heard in the distance. He wants to test his strength against Gunther, but the latter proposes brotherhood instead of battle. Gutrune brings Siegfried a horn with the magic potion. Draining the horn, Siegfried departs; the magic helmet he won with the treasure of the Nibelungs when he killed the dragon guarding it will allow him to adopt Gunther´s form. Hagen is triumphant. His plan is close to fruition: deceived, Siegfried will bring Gunther his own wife; Hagen will have the gold Ring, and he will subsequently become ruler of the earth. Meanwhile, Brunnhilde cannot give up her husband´s gift. Valhalla may perish, but the Valkyrie will not surrender the Ring. Waltraute disappears in despair. Siegfried´s horn can be heard in the distance. Brunnhilde listens entranced. But her joy is suddenly replaced with terror – she is faced with a stranger calling himself Gunther. Has Wotan tricked her? Can others beside Siegfried pass through the fire to her? She tries to resist, but Siegfried, appearing in a different guise thanks to the helmet, tears the Ring from her finger – now she is betrothed to Gunther. She will spend the night with her husband in the cave. Siegfried, however, remains true to his oath of brotherhood – he places his sword on the bed between them.

Act II
It is the middle of the night and Hagen is asleep. Alberich the Nibelung approaches him. Hagan must obtain the Ring for him, then the two of them will hold sway over the earth. As the sun rises, Alberich disappears. The joyful voice of the returning Siegfried can be heard. He tells Gutrune how he led Brunnhilde from the flames and, unnoticed in the midst, placed her in Gunther´s arms. At the castle, preparations begin to celebrate the two weddings. The triumphant Gunther enters with Brunnhilde. She is startled to see Siegfried together with Gutrune. What can have happened? Could he have forgotten her? On Siegfried´s finger she notices her ring, which he forgot to give Gunther. She understands everything. The only thing she does not know is that Siegfried has forgotten her because f the magic potion. In despair, she begs the gods to grant revenge on the man who has betrayed her, insisting that he is her husband. Siegfried, however, can remember Brunnhilde only from the previous day, and swears that he did not touch his friend´s bride. But Brunnhilde proceeds to swear that she is Siegfried´s wife. Everyone is shocked – surely Siegfried would not shame Gunther´s honour and break their oath of brotherhood? Siegfried and Brunnhilde swear once again on the spear that each is telling the truth. When the guests leave, the indignanat Hagen approaches Brunnhilde, who is filled with mournful thoughts. Hagen convinces her to take her revenge, but he does not know how to accomplish this. The offended Brunnhilde tells the devilishly cunning Nibelung Siegfried´s secret – is invincible in battle as he always faces his enemy; his only weak spot is his back. Siegfried will die during a hunt…

Act III
On the banks of the river, the three Rhinemaidens await Siegfried. Gently and mildly, they bed him to return the Ring. Siegfried begins to waver. But as soon as the Rhinemaidens tell him he will be safe only if he surrenders the Ring, he changes his mind. None shall call him a coward. In despair, the Rhinemaidens prophesy his impending death and swim away. The hunters gather. Hagen asks Siegfried to tell him how he learned the language of the birds. Siegfried recalls the past, his childhood in the woods, Mime who raised him, the blood of the dragon guarding the gold and the sleeping Valkyrie. At the very moment he turns on hearing some crows cawing, Hagen stabs him in the back. As he dies, Siegfried speaks of his love for Brunnhilde. Hagen tells Gutrune of Siegfrieds death. Hagen demands the Ring as payment for the murder, but Gunther refuses to let him have it. Hagen then attacks Gunther and, after a short struggle, the latter falls, dead. The triumphant Hagen approaches Siegfried´s body, but the hero´s arm rises in a menacing gesture. Terror-stricken, everyone steps back. Brunnhilde orders a funeral pyre be built on the banks of the Rhine. She will die beside her husband in its flames. She removes the Ring from Siegfried´s finger – the Rhinemaidens will recover it from her ashes. The flames of the pyre will cleanse the Ring of its curse, the gold of the Rhine will return to the river and Alberich´s curse will be at an end. Brunnhilde sends the crows to the gods at Valhalla to announce the hour of their death. She throws herself into the blazing flames. The Rhine swells and its waves wash away the remains of the pyre. Hagengives a shout and dives into the river, still hoping to obtain the Ring, but the Rhinemaidens laughingly drag him down to the river-bed. Crime on earth has come to an end. The world´s injustices have been redeemed by the death of the hero of heroes, and the cursed Ring of the Nibelung once again lies in peace in the depths of the Rhine.