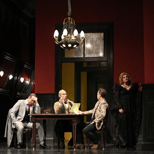 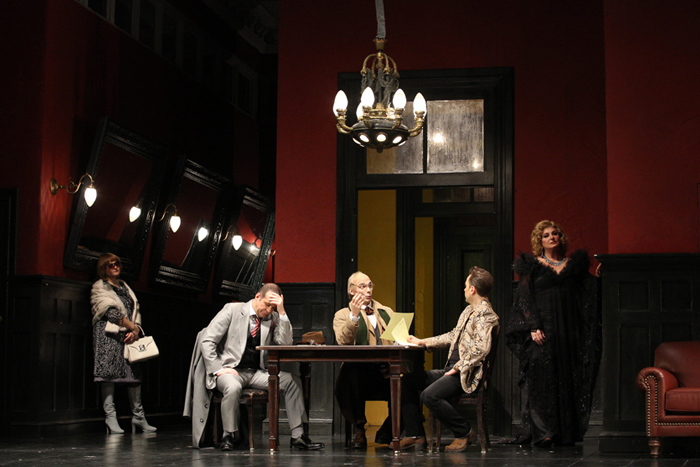 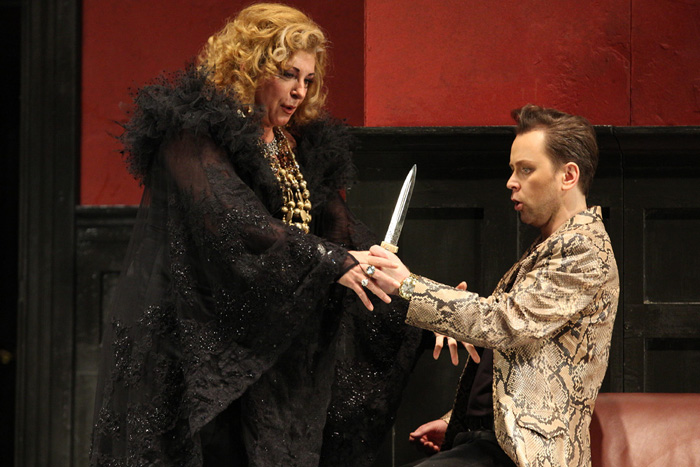 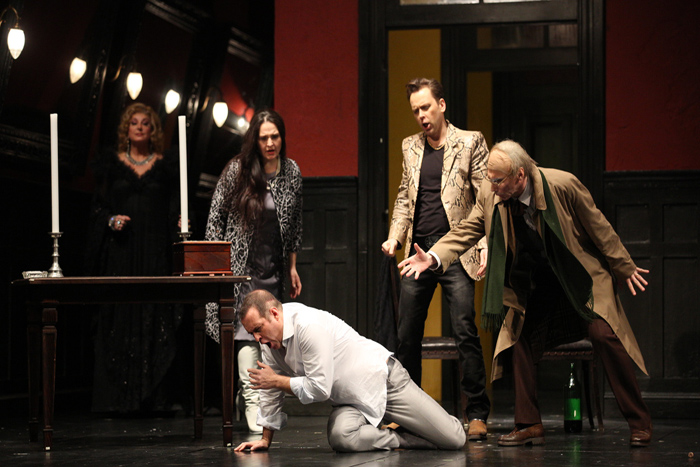 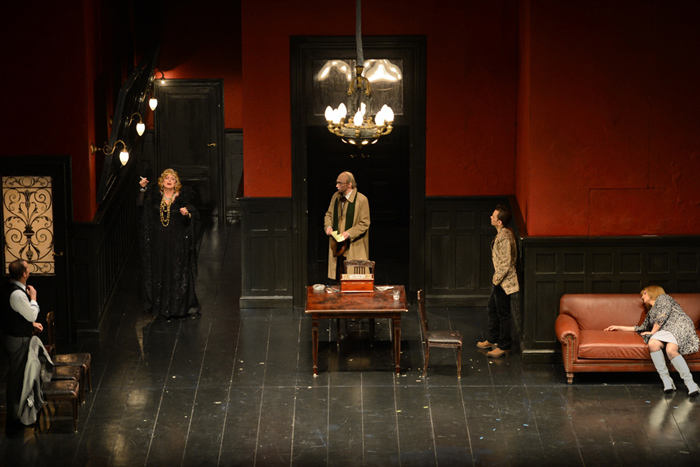 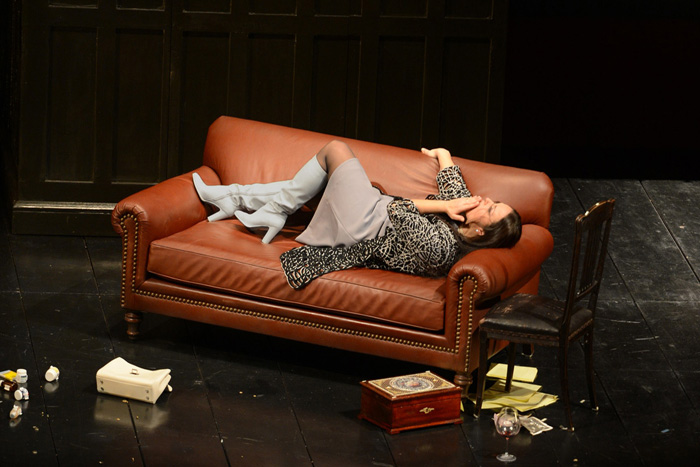 The intricate, medieval plot of the opera, often considered impossible to even retell in a succinct manner, is presented by Dmitri Tcherniakov on a small scale, in an intimate performance. The five characters, connected by their terrible family past, grapple with the secrets that torture them, and attempt to escape their oppressive entrapment. Despite all being victims of events in the distant past, none of them understand the full details until the very end. Intentionally confined to the closed space of an abandoned house — where no outsiders or incidental or otherwise unimportant characters can enter — the protagonists try to establish exactly what happened in the past and untangle the grim knot of mysterious events and coincidences. They remain in the building until the very end of the drama, effectively held hostage, with no way of saving themselves, hiding, or pulling out.

When staged in 2012 at the La Monnaie theatre in Brussels, Dmitri Tcherniakov’s interpretation of Il trovatore became one of the most widely discussed productions in European opera. A new chapter in its history on stage begins in Russia this autumn at the Mikhailovsky Theatre.

Scene 1: The guard room in the castle of Luna (The Palace of Aljafería, Zaragoza, Spain)

Ferrando, the captain of the guards, orders his men to keep watch while Count di Luna wanders restlessly beneath the windows of Leonora, lady-in-waiting to the Princess. Di Luna loves Leonora and is jealous of his successful rival, the troubadour Manrico. In order to keep the guards awake, Ferrando narrates the history of the count (Aria: Di due figli vivea padre beato / "The good Count di Luna lived happily, the father of two sons"): many years ago, a gypsy was wrongfully accused of having bewitched the youngest of the di Luna children; the child had fallen sick and for this the gypsy had been burnt alive as a witch, her protests of innocence ignored. Dying, she had commanded her daughter Azucena to avenge her, which she did by abducting the baby. Although the burnt bones of a child were found in the ashes of the pyre, the father refused to believe in his son's death; dying, he commanded his firstborn, the new Count di Luna, to seek Azucena.

Scene 2: Garden in the palace of the princess

Leonora confesses her love for Manrico to her confidante, Ines (Tacea la notte placida / "The peaceful night lay silent"... Di tale amor / "A love that words can scarcely describe"). When they have gone, Count di Luna hears the voice of his rival, Manrico, in the distance: (Deserto sulla terra / "Alone upon this earth"). While Leonora in the darkness mistakes the count for her lover, Manrico himself enters the garden, and she rushes to his arms. The count recognises Manrico as his enemy, who has also been condemned to death due to his political affiliations, and challenges him to a duel over their common love. Leonora tries to intervene, but cannot stop them from fighting (Trio: Di geloso amor sprezzato / "The fire of jealous love" ).

The gypsies sing the Anvil Chorus: Vedi le fosche notturne / "See! The endless sky casts off her sombre nightly garb...". Azucena, the daughter of the Gypsy burnt by the count, is still haunted by her duty to avenge her mother (Aria: Stride la vampa / "The flames are roaring!"). The Gypsies break camp while Azucena confesses to Manrico that after stealing the di Luna baby she had intended to burn the count's little son along with her mother, but overwhelmed by the screams and the gruesome scene of her mother's execution, she became confused and threw her own child into the flames instead (Aria: Condotta ell'era in ceppi / "They dragged her in bonds"). Manrico realises that he is not the son of Azucena, but loves her as if she were indeed his mother, as she has always been faithful and loving to him. Manrico tells Azucena that he defeated di Luna in their duel, but was held back from killing him by a mysterious power (Duet: Mal reggendo / "He was helpless under my savage attack"). A messenger arrives and reports that Leonora, who believes Manrico dead, is about to enter a convent and take the veil that night. Although Azucena tries to prevent him from leaving in his weak state (Ferma! Son io che parlo a te! / "I must talk to you"), Manrico rushes away to prevent her from carrying out this intent.

Scene 2: In front of the convent

Di Luna and his attendants intend to abduct Leonora and the Count sings of his love for her (Aria: Il balen del suo sorriso / "The light of her smile" ... Per me ora fatale / "Fatal hour of my life"). Leonora and the nuns appear in procession, but Manrico prevents di Luna from carrying out his plans and takes Leonora away with him.

Act 3: The Son of the Gypsy Woman

Scene 1: Di Luna's camp Di Luna and his army are attacking the fortress where Manrico has taken refuge with Leonora (Chorus: Or co' dadi ma fra poco / "Now we play at dice"). Ferrando drags in Azucena, who has been captured wandering near the camp. When she hears di Luna’s name, Azucena’s reactions arouse suspicion and Ferrando recognizes her as the murderer of the count’s brother. Azucena cries out to her son Manrico to rescue her and the count realizes that he has the means to flush his enemy out of the fortress. He orders his men to build a pyre and burn Azucena before the walls.

Scene 2: A chamber in the castle Inside the castle, Manrico and Leonora are preparing to be married. She is frightened; the battle with di Luna is imminent and Manrico’s forces are outnumbered. He assures her of his love (Aria, Manrico: Ah sì, ben mio, coll'essere / "Ah, yes, my love, in being yours"), even in the face of death. When news of Azucena’s capture reaches him, he summons his men and desperately prepares to attack (Stretta: Di quella pira l'orrendo foco / "The horrid flames of that pyre"). Leonora faints.

Scene 1: Before the dungeon keep

Manrico has failed to free Azucena and has been imprisoned himself. Leonora attempts to free him (Aria: D'amor sull'ali rosee / "On the rosy wings of love"; Chorus & Duet: Miserere/ "Lord, thy mercy on this soul") by begging di Luna for mercy and offers herself in place of her lover. She promises to give herself to the count, but secretly swallows poison from her ring in order to die before di Luna can possess her (Duet: Mira, d'acerbe lagrime / "See the bitter tears I shed").

Scene 2: In the dungeon

Manrico and Azucena are awaiting their execution. Manrico attempts to soothe Azucena, whose mind wanders to happier days in the mountains (Duet: Ai nostri monti ritorneremo / "Again to our mountains we shall return"). At last the gypsy slumbers. Leonora comes to Manrico and tells him that he is saved, begging him to escape. When he discovers she cannot accompany him, he refuses to leave his prison. He believes Leonora has betrayed him until he realizes that she has taken poison to remain true to him. As she dies in agony in Manrico's arms she confesses that she prefers to die with him than to marry another (Trio:Prima che d'altri vivere / "Rather than live as another's"). The count has heard Leonora's last words and orders Manrico's execution. Azucena awakes and tries to stop di Luna. Once Manrico is dead, she cries: Egli era tuo fratello! Sei vendicata, o madre. / "He was your brother... You are avenged, oh mother!".