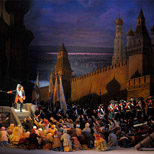 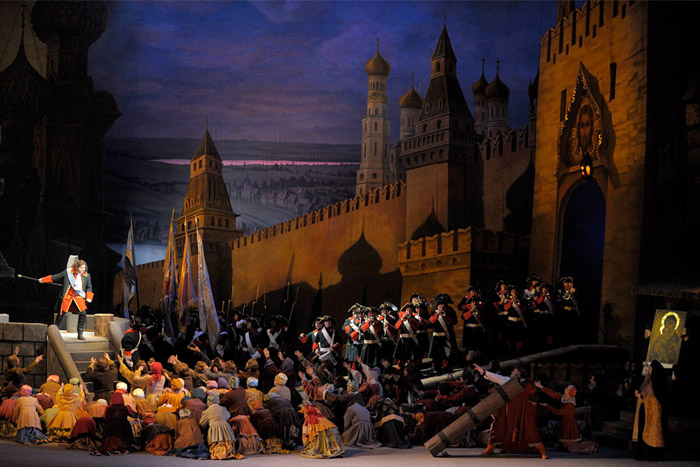 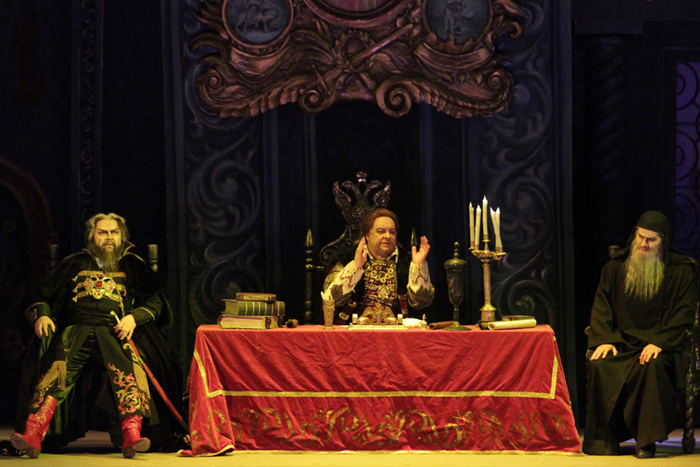 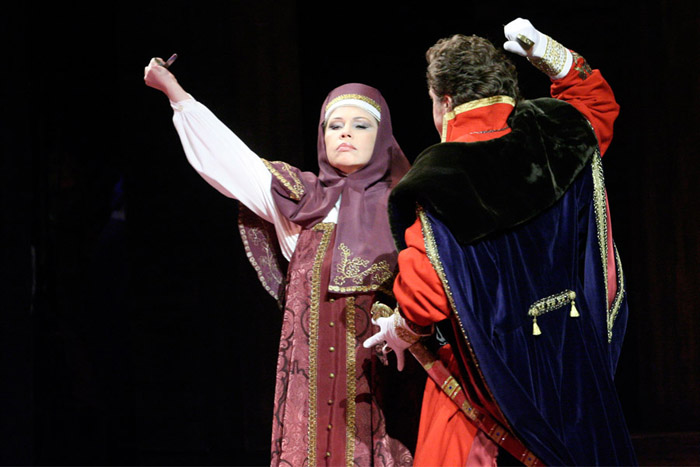 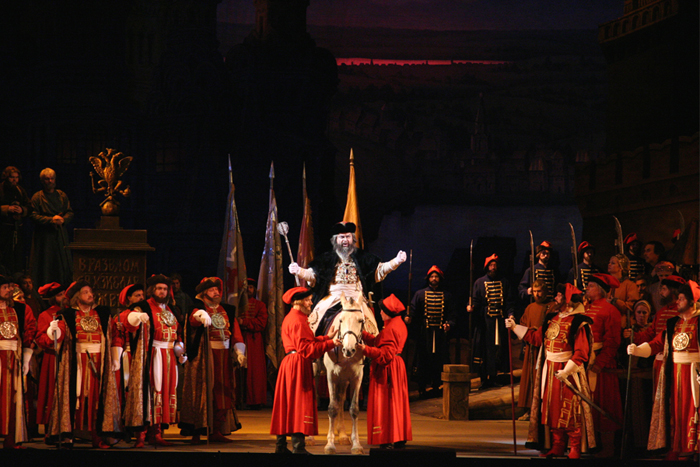 Act I
Red Square in Moscow. Dawn. The boyar Shaklovity – a protégé of Tsarevna Sofia – is dictating an anonymous letter to Peter I in which he denounces the head of the streltsys (a privileged military core instituted by Ivan the Terrible) Ivan Khovansky for planning to place this son on the throne and re-establish the old order in Russia. At the same time, the  streltsys scouts praise themselves for their recent victory over the loathsome boyars. In memory of these bloody events a column is erected on the square onto which the names of the executed are carved. Strangers just arriving halt at the column. They make the scrivener read out the words to them. In gloomy contemplation they are struck down by the thought of sedition and the  streltsys’ despotism.
To welcoming cries from the  streltsy Prince Ivan Khovansky appears. He is followed by his son Andrei who is pursuing his love for Emma, a girl from the German sloboda. Through his promises and threats he will win Emma’s love. Marfa, Andrei’s new sweetheart, comes to her defence. Returning, Ivan Khovansky witnesses this scene. He himself has taken a fancy to Emma, but Andrei is ready to kill her rather than let his father have her. The knife held over the girl is imperiously removed by Dosifei, the leader of the dissenters.

Act II
The study of Prince Vasily Golitsyn, the favourite of Tsarevna Sofia. The Prince is immersed in gloomy thoughts and he is seized by a fear of the future.
The pastor from the German sloboda comes to him with a complaint about the Khovanskys’ arbitrariness, but the Prince does not with to hear him.
Marfa comes into the chamber through a secret door. Under the guise of a fortune-teller, Marfa predicts the Prince will face disgrace. Superstitious, Golitsyn is left confused. In order to keep the prophesy a secret he orders a servant to kill the fortune-teller, but Marfa manages to conceal herself.
At Golitsyn’s house the opponents of Peter I have assembled. Golitsyn and Khovansky’s talk of hidden rivals who hate and fear one another develops into a quarrel which is terminated by Dosifei. He orders them to control their arrogant pride and think of the salvation of Russia. Perturbed, Marfa runs in. She tells of the attempt on her life and her miraculous salvation thanks to a soldier of the young Tsar Peter. The conspirators hear this name in fear. But there is yet more disturbing news, brought to them by Shaklovity: the Tsar has learned of the plot branded it “the Khovansky Affair” and decreed that it be investigated.

Act III
Marfa has come to the Khovanskys’ house not far from the River Moskva. She feels Prince Andrei’s betrayal deeply. Dosifei, comforting her, takes her away with him.
Having woken up, the drunken streltsy give free reign to riotous and reckless merriment. It is interrupted by the scrivener who is frightened to death. A disaster has occurred: mercilessly killing the residents of the  sloboda, Peter’s army is advancing. The  streltsy are stunned. They ask Khovansky to lead the troops onto the battlefield. Fearing Peter, however, the Prince orders the  streltsy to submit and go home.

Act IV
Scene 1
Golitsyn’s servant warns Khovansky, who has taken refuge at his estate near Moscow, that his life is in danger. Khovansky explodes in fury – who would dare touch him on his own lands? Shaklovity appears with an invitation from Tsarevna Sofia to a secret rendezvous. Khovansky orders his ceremonial clothes be put on. But as soon as the Prince leaves the chamber Shaklovity’s mercenary stabs him with a dagger.

Scene 2
Punishment awaits the other conspirators, too: Prince Golitsyn is sent into exile under escort and guards are given the order to surround the dissenters’ monastery. Andrei Khovansky alone knows nothing of the plot’s failure. He does not believe Marfa, who tells him about the murder of his father, and in vain blows into a horn, calling his regiment. However, when he sees the  streltsys being led to their deaths, Andrei understands that all is over and in terror he asks Marfa to save him.
The streltsys are already bowing their heads on the executioner’s blocks, but at the very last minute the boyar Streshnev declares a decree of pardon, having been sent by Peter.

Act V
A clearing deep in the forest. Alone, Dosifei laments. He admits the dissenters are doomed. Filled with bold determination he turns to the brotherhood and calls on them to burn in fire in the name of Holy Truth. The sounds of trumpets can be heard from the forest. The dissenters enter the monastery with a prayer and set light to themselves. Along with the whole fraternity, Andrei also perishes, drawn into the flames by Marfa who dreamt of being united with her beloved in death.