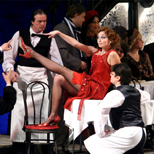 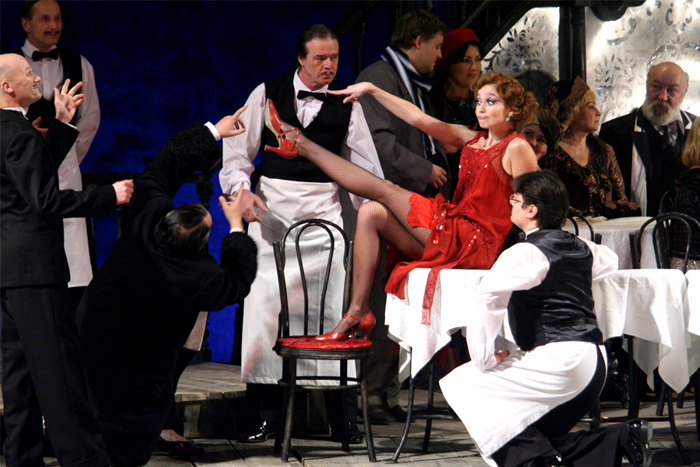 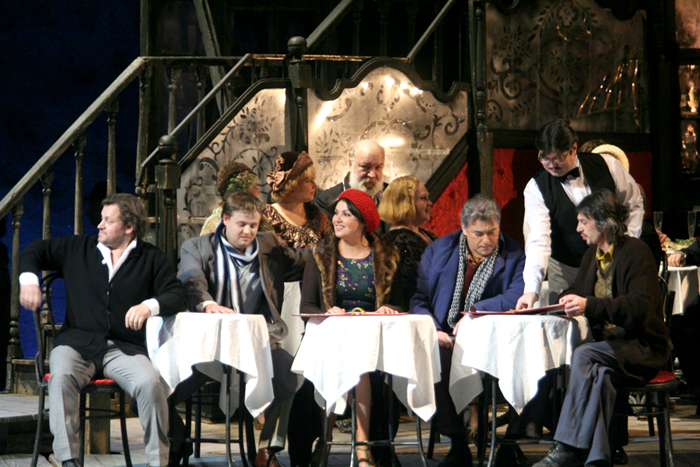 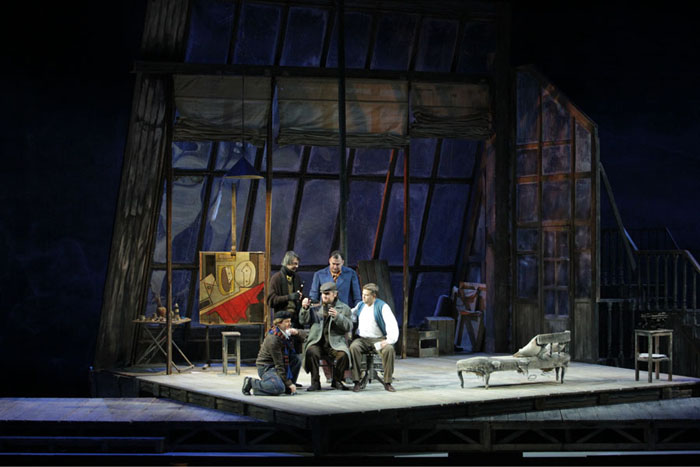 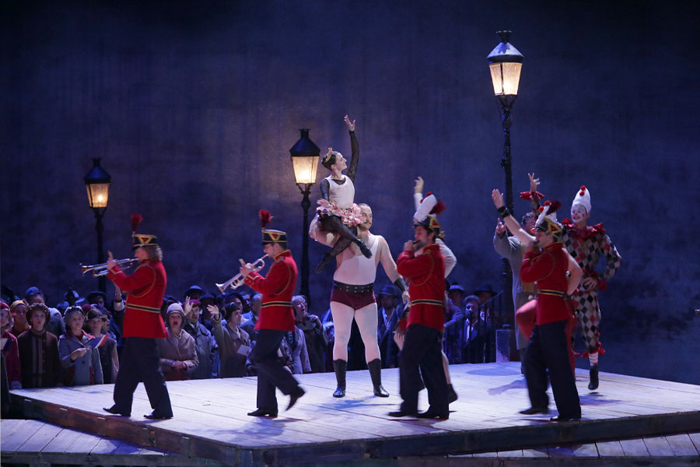 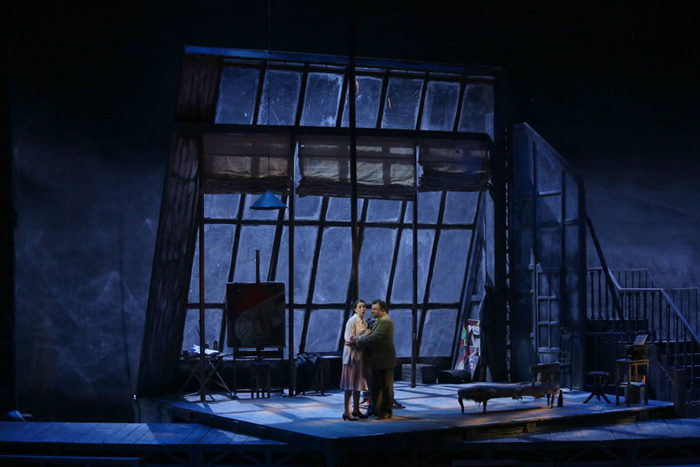 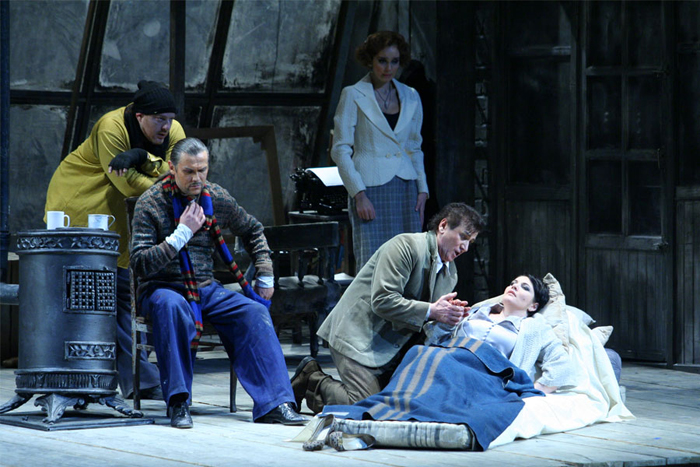 Act I
An attic in the Latin Quarter; Christmas Eve
Rodolfo and Marcello complain of the bitter cold. They need to light their stove: Marcello suggests using a chair, but Rodolfo offers the manuscript of the play he is writing and they banter ironically as they enjoy the fleeting warmth. Colline enters and the remaining acts of the play are burnt.
Colline brings wood, cigars and wine, followed by Schaunard, who explains that an Englishman engaged him to play his violin incessantly, to hasten the death of a neighbour’s noisy parrot: after three days he had the bird poisoned.
The friends’ decision to eat in the Latin Quarter is interrupted by Benoit, their landlord who has come for the rent. They ply him with wine until he boasts of his amorous conquests: he prefers plump women to skinny ones like his wife. The Bohemians pretend outrage at Benoit’s infidelity and push him out.
They prepare to leave for the Cafè Momus, but Rodolfo says he will stay behind to finish writing an article. There is a noise outside the door. It is a girl who asks for a light for her candle; she feels faint after climbing the stairs. As she is leaving, her candle flickers out again and she realises she has lost her key. Rodolfo’s candle goes out too as he helps her. He takes her cold hand and tells her of his life as a poet. She says her name is Mimì and describes her simple life as a flower embroiderer.
The voices of Rodolfo’s friends are heard, telling him to hurry. He answers and turns to find Mimì bathed in moonlight. They declare their love for each other. Mimì asks if she may join the four friends in the Cafè Momus. Rodolfo at first wants to stay, but eventually they leave, singing of love.

Act II
The Cafè Momus in the Latin Quarter
It is a bustling Christmas scene; hawkers and traders advertise their wares; Rodolfo and Mimì wander through the crowd. They sit down and order dinner. Rodolfo introduces Mimì to his friends. Parpignol, a toyseller, passes, followed by a crowd of children. When Mimì shows her new friends the bonnet Rodolfo has bought her, it angers Marcello: he thinks of his faithless Musetta.
As they propose a toast Musetta appears, accompanied by Alcindoro, an admirer whom she is tormenting. Musetta, increasingly agitated at being ignored by Marcello, determines to win him back. She launches into a song in which Marcello eventually joins. She complains of a painful foot and dispatches Alcindoro to buy new shoes. The bill for supper appears and no-one has any money. Musetta saves the situation by placing the bill on Alcindoro’s plate. The friends leave as a band marches through the square: Alcindoro returns, finds the bill, and sinks dumbfounded into a chair.

Act III
Outside the Barrière d’Enfer
Sweepers shout to be let through the gate. From inside the tavern comes the voice of Musetta. Mimì enters, ill and racked with coughing. She asks for Marcello. He tells her that he and Musetta have been living there and that Rodolfo is now with them. Mimì explains that Rodolfo’s jealousy is destroying their relationship and that last night he left her. Marcello advises Mimì to go, but instead she hides nearby.
Rodolfo comes out of the tavern and says he must break up with Mimì: her flirting has driven him mad. Eventually, however, he reveals the real reason: she is so ill that his miserable poverty offers her nothing but the prospect of death.
Mimì breaks down, weeping and coughing. As Rodolfo hurries to her, Musetta’s laughter is heard and Marcello goes to see what she is up to. Mimì says farewell to Rodolfo: all she asks is that he sends her possessions, but if he wishes, he may keep the pink bonnet. Marcello and Musetta, quarrelling, separate acrimoniously. Rodolfo and Mimì stay together, resolving to postpone their separation until the spring.

Act IV
The attic; some months later
Marcello and Rodolfo, trying to work, are discussing their lives. Rodolfo has seen Musetta in a fine carriage; Marcello has seen Mimì dressed like a queen. Rodolfo takes out Mimì’s bonnet and Marcello pulls some of Musetta’s ribbons from his pocket; they both indulge in a nostalgic recollection of times past.
Schaunard and Colline arrive with bread and a herring and the four clown around in mock ceremony. Suddenly Musetta enters. She has brought Mimì, who is desperately ill. Rodolfo carries Mimì in and she is helped to bed. Musetta explains that she met Mimì in the street and that Mimì, sensing she was dying, begged to be taken to Rodolfo. Mimì rallies and greets the friends. Musetta instructs Marcello to sell her earrings to pay for medicine and a doctor. Colline leaves to pawn his beloved old coat. Mimì expresses her love for Rodolfo. They are reconciled and reminisce about their first meeting.
Mimì is overwhelmed by a coughing fit. The others return with a muff and medicine. But it is too late: Mimì dies unnoticed while they are preparing her medicine.