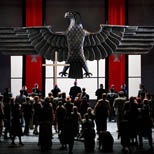 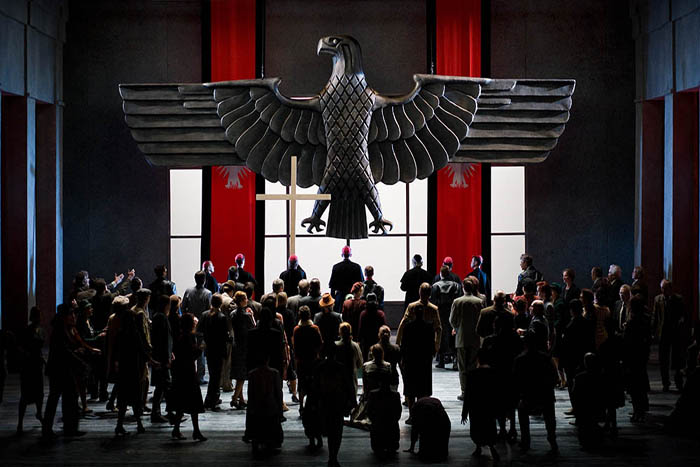 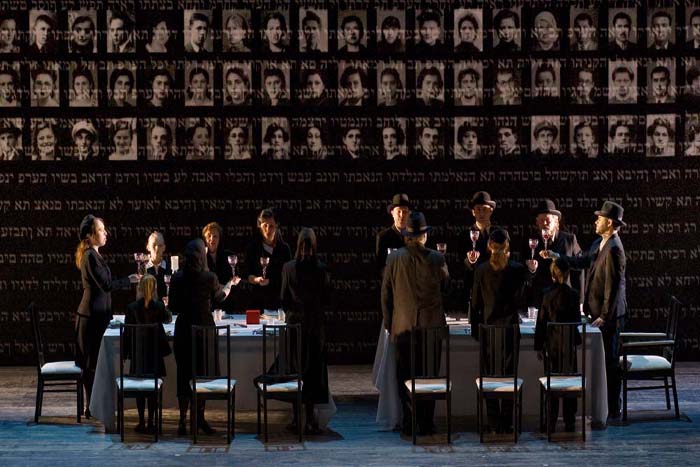 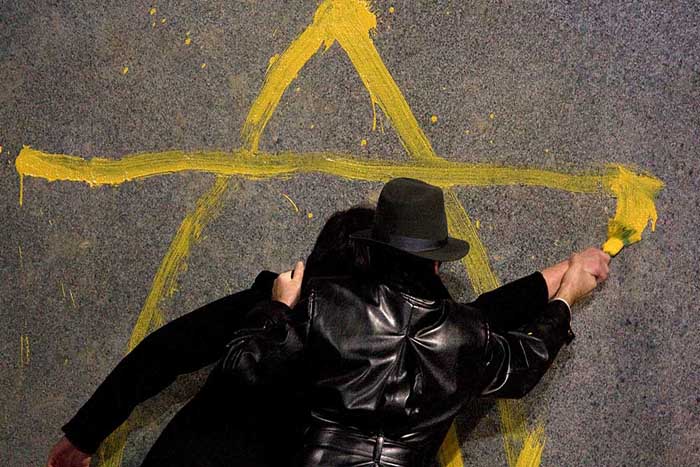 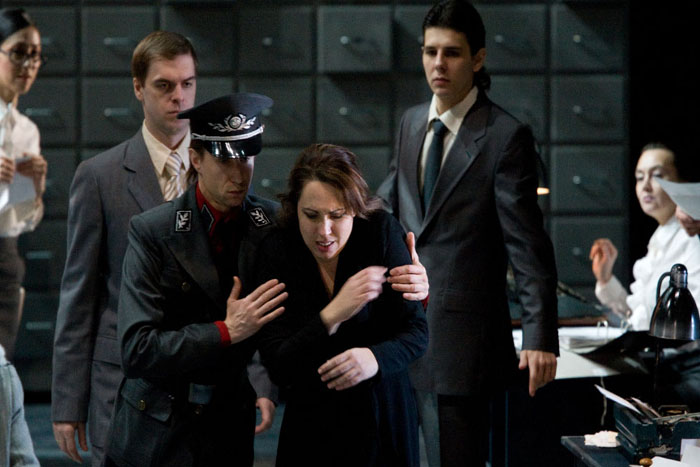 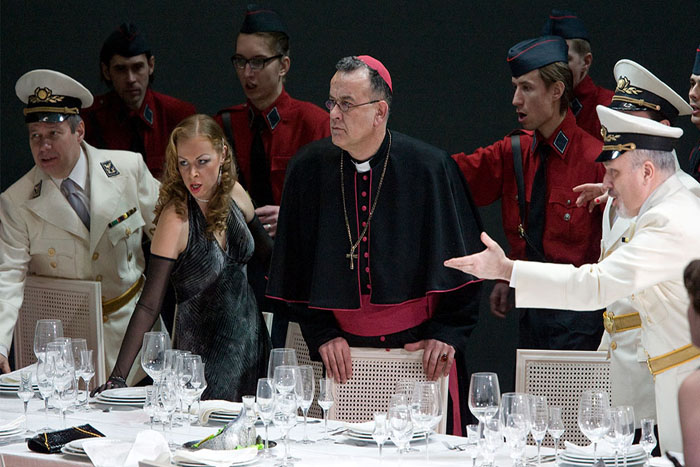 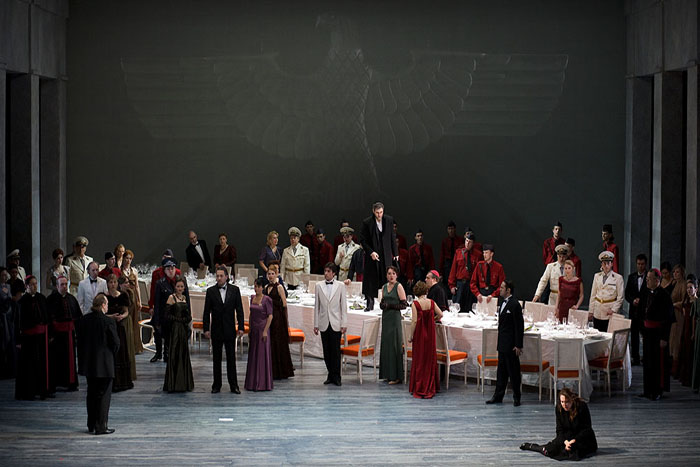 Premiere of the production: 19 February 2010

The Mikhailovsky Theatre turns to the opera that became a cornerstone of the French opera repertoire. La Juive by Jacques François Fromental Halévy is a masterpiece of grand style of the early 19th century. In the productions of the grand style visual effects prevailed over the musical and dramatic logic, however, very soon the trend was conceived as a most convincing implementation of the synthetic nature of musical theatre. The opera combines the elements of lyricism, dramatism and sonority. La Juive is notable for its brilliant vocal parts and complex ensembles.

The production at the Mikhailovsky Theatre by the French stage director Arnaud Bernard and stage designer Herbert Murauer adapts the arresting storyline to modern times.

The unique personality means nothing for the impersonal wheels of state and the opposition is treated taking into account the experience of several generations, who really know the nature of totalitarianism. The opera is set in the city of Constance in 1414 during the time of persecution of Jews. Through the story of an impossible love between a Christian man and a Jewish woman, the work may be seen as a plea for religious tolerance.

The events take place in 1930s in a European country.

A town square. The townsfolk are praying. The mayor of the town, Ruggiero, followed by his retinue, appears on the square to inform the people of the victory in the war. A public holiday is announced to celebrate the victory. All the work is to be suspended; holy services are to be held in churches.

The Jew Eléazar, a goldsmith, goes on working. On Ruggiero’s order, the guards bring Eléazar and his daughter Rachel to the mayor. Ruggiero accuses Eléazar of defying the Christian law. The Jew insists that his beliefs don’t ban his work and he’s not going to follow any traditions of the Christians, who had doomed his family to death. Ruggiero threatens him.

Cardinal de Brogni appears. Eléazar rushes to him, praying for forgiveness. Brogni recognizes Eléazar from the days when both men lived in Rome: Brogni was then the city magistrate, who had banished the Jew from Rome. Now Brogni, full of remorse, counsels forgiveness and lets Rachel and Eléazar go, telling Ruggiero that their example may inspire the Jews to turn to the Christian god.

Léopold, who is secretly in love with Rachel, has been able to gain entry to Eléazar’s house, disguised as Samuel, a young Jewish painter. Rachel invites him to join her and her father for a Passover Seder the next evening. As the townsfolk return, the lovers hide.

Ruggiero, who has noticed Jews in the crowd of Christians, orders to arrest the Jews. Léopold protects Rachel, and she’s spared. Eléazar manages to disappear.

In Eléazar’s home «Samuel» has joined others in celebrating Passover. Rachel realizes that «Samuel» is not a Jew: he doesn’t know their traditions. Eudoxie, Léopold’s fiancée, comes to Eléazar: she wishes to buy a chain for Léopold. Eudoxie asks Eléazar to deliver the chain to her place. Rachel insists that Léopold should tell the truth about himself. Léopold promises to tell everything at night. Eléazar suspects an affair between the guest and his daughter and, smelling a rat, dismisses Léopold.

At night, Léopold returns to Rachel. He confesses that he is a Christian. Rachel is horror struck: according to the law, an affair between a Jew and a Christian is punished by death sentence. Léopold begs her to elope with him. She is on the point of leaving with him when Eléazar catches them. Léopold admits to Eléazar that he’s a Christian. Eléazar is furious; he rushes to Léopold, meaning to kill him. Rachel intervenes, insisting that she is as much to blame as her lover. Moved by Rachel’s pleas, Eléazar consents to her marriage, in case Léopold changes his faith. Léopold has to admit all the truth: he’s also Eudoxie’s fiancé. Eléazar calls on God to curse Léopold.

Eléazar followed by his daughter brings the chain commissioned by Eudoxie. Léopold is startled to see them. When Eudoxie presents the chain to Léopold, Rachel leaps forward, tears the chain from Eudoxie, and declares Léopold unworthy to receive such a precious gift. He has had relations with a Jewish girl, a crime for which they both must die. She confesses that Jewish girl is her. Eudoxie is desperate. Léopold doesn’t offer excuses. Since Léopold won’t defend himself, Cardinal de Brogni supposes the allegation to be true, and orders to arrest Eléazar, Rachel and Léopold.

Eudoxie visits Rachel in her prison cell and begs her to deny Léopold’s guilt and to save him. Bringing down her pride, Rachel agrees to save the beloved man. Eudoxie withdraws. Cardinal de Brogni has Eléazar brought before him in an attempt to save them from the sentence, if the Jews renounce Judaism. Eléazar refuses: he’s humiliated with Cardinal’s offer, insulted by Léopold’s behaviour, and is set on revenge.

Eléazar has been keeping a secret for many years: Rachel, who had been saved by him, is the daughter of de Brogni. Cardinal knows that the girl had been saved by a Jew. Brogni supposes that Eléazar knows some details and pleads with him to reveal her whereabouts, but Eléazar spurns him. ‘Die, if you want to’, cries Cardinal de Brogni before leaving.

Eléazar and Rachel are ready to die. Eléazar is surprised with the absence of Léopold. Ruggiero tells Eléazar that only two people were condemned to die; Léopold has been sent into exile. Ruggiero explains that Rachel’s testimony saved Léopold.

De Brogni and ordinaries appear. Brogni asks Eléazar once again what became of his daughter. Eléazar keeps silence, he wants vengeance. He tells Rachel that he could save her at the expense of his life. Rachel is steadfast. As Rachel is about to be executed, Eléazar reveals to Brogni that she is his long lost daughter and follows her to his death.