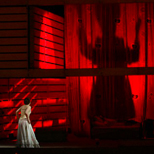 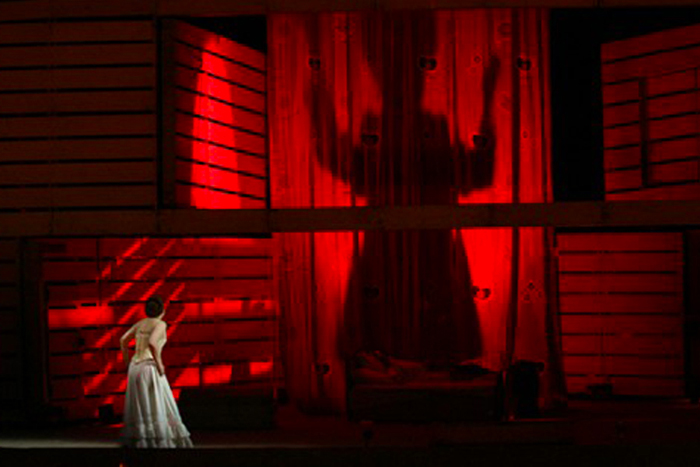 Co-production with the New Israeli Opera

Scene 1. Katerina Lvovna leads an unhappy existence in the home of her husband, the distinguished merchant Zinovy Borisovich Ismailov. The marriage has produced no children. Katerina spends her time in agonising idleness, languishing in melancholy and loneliness. She is exasperated by her father-in-law Boris Timofeyevich, who is frustrated that she has been married five years and has failed to produce an heir.
Zinovy Borisovich brings in Sergei, a new worker. Business forces Zinovy Borisovich to leave home for a period: the dam at the mill has burst. Ordered by Boris Timofeyevich the workers pretend they are sad when their master leaves. Katerina’s cruel and suspicious father-in-law insists that Katerina swear fidelity to her husband. The cook Aksinya tells Katerina about Sergei: “Name any woman who’s taken his fancy, he’ll get her into trouble.”

Scene 2. Taking advantage of the master’s absence, the Ismailovs’ servants loaf around. Sergei and his friends mock and play tricks on the clumsy Aksinya. Katerina Lvovna enters the yard and defends the cook, threatening to do away with Sergei, the ring-leader. He proposes a battle of strength. At the peak of the jovial scuffle Boris Timofeyevich appears. He sends everyone back to work and threatens Katerina that he will tell her husband everything.

Scene 3. Katerina Lvovna’s bedroom. She is tormented by boredom and recalls how in her childhood she admired a pair of doves that billed and cooed around their nest… But now her life is to pass with no joy, no happiness. Sergei’s unexpected appearance shatters her loneliness: he asks “if I can borrow a book” and speaks of woman’s sorrowful lot, but all this is a mere ruse to seduce Katerina. In confusion she yields to him: Sergei has awoken hitherto unknown emotions.

Scene 4. Boris Timofeyevich cannot sleep, he sees thieves everywhere. He remembers how he found it hard to sleep in his younger years too, but for a different reason: he loved to stroll past the windows of other men’s wives. Even now he enjoys reflecting on the old days and having a glimpse at his son’s young wife.
And so he sees Sergei slinking out of Katerina’s apartments. Old Ismailov is merciless. Katerina’s pleas are to no avail: Sergei is beaten half to death before her very eyes then locked in the storeroom.
In furious madness Katerina serves her loathsome father-in-law mushrooms tainted with rat poison for dinner. As he dies, the old man confesses to the priest and accuses his daughter-in-law of the foul deed.

Scene 5. Katerina is happy. Her lover is at her side. But Sergei is dispirited at Zinovy Borisovich’s impending return: it is not enough for him to be Katerina’s secret lover – he wants to be her husband and the master. Katerina pacifies him, but her conscience is in torment: everywhere she sees the ghost of Boris Timofeyevich, cursing the woman who poisoned him.
Zinovy Borisovich’s unexpected return and mockery of Katerina incite the lovers to murder. They kill Zinovy Borisovich and hide the corpse in the cellar.

Scene 6. Although the path to happiness now seems clear, Katerina’s soul knows no happiness: her conscience troubles her. Even on the day of her marriage to Sergei she stands by the cellar containing the corpse of Zinovy Borisovich…
A covetous Shabby Peasant has long believed the cellar to be full of good wine. After the couple leave for church he breaks open the lock, finds the corpse and hastens off to the police in terror.

Scene 7. The police station. The constable is complaining that “They pay us most unfairly and good bribes are rarely offered.” But he is particularly aggrieved that, contradictory to custom, he has not been invited to the Ismailovs’ house for the wedding. The Shabby Peasant’s tale thus arouses vengeful delight. The policemen rush off to the Ismailovs’.

Scene 8. The wedding feast is in full swing. Drunken guests and the priest praise the newlyweds. Katerina is envious and angry at the guests. Suddenly she sees that the cellar lock has been broken open. Seeing that the murder of Zinovy Borisovich has been discovered she decides to flee with Sergei. But too late – the police are already at the gates. In an attempt to save Sergei, Katerina takes the blame: “I, I alone, am guilty.” Sergei tries to flee with the money but is apprehended. The newlyweds are taken to prison.

Scene 9. A group of convicts headed for Siberia has settled for the night on the banks of a river. Sergei and Katerina are among them. Now Sergei has no reason to pretend he is in love. He accuses Katerina of being the source of all his miseries and that she has brought him to this. In front of everyone he openly flirts with the young convict Sonyetka; together they poke fun at the “rich merchant’s wife”. Sergei seeks Sonyetka’s favour, but she demands a present – Katerina’s warm stockings. Sergei comes to Katerina Lvovna and tricks her into giving him the stockings by feigning sickness. The convicts roar in laughter at the abandoned Katerina.
It is time for debts to be settled. Sergei’s treachery is the last straw for Katerina: she realises the true horror of everything that has passed. Neither the drum roll reveille nor the kind words from the Old Convict can restore her energies. Death is the key to salvation…
She thrusts Sonyetka into the water and then plunges in after her. The swift current carries them both away, and the Old Convict’s bitter voice seems to hang over the surface of the river: “Oh, why is this life so dark and terrifying? Is man born for such a life?”