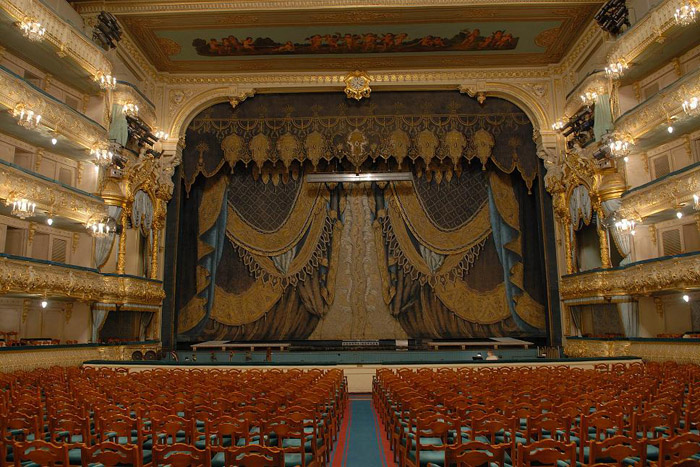 A beguiling flower of French Romantic opera, Léo Delibes' Lakmé remains on the peripheries of the international operatic repertoire and is known to many thanks only to its famous Flower Duet and the soprano's Bell Song aria. Outside France, it is rarely staged today. Lakmé is the jewel in the crown and the pride of Paris' Opéra-Comique, where it was first performed on 14 April 1883 and where it went on to enjoy an unbroken run of some eighty years. The first performer of the role of Lakmé was the American Marie van Zandt. It was also she who appeared in the St Petersburg premiere of Lakmé the following season (the opera was staged by the Imperial Italian Company). Van Zandt's staggering debut in Paris in Ambroise Thomas' opera Mignon resulted in the playwright Edmond Gondinet's writing a new work especially for her. His choice fell on a plot by Pierre Loti, a sailor and author of adventure novels about heroes in exotic lands. Taking Loti's novel Rarahu as a basis, Gondinet and Philippe Gille, another poet of opera, produced a libretto which was presented to Delibes – the latter by that time having already composed the popular ballets Coppélia and Sylvia.
The plot of Lakmé unfolds in colonial India in the late 19th century. Two lovers, a soprano and a tenor, are representatives of two different civilisations. The British army officer Gérald is captivated by the beauty of the priestess Lakmé, while Lakmé is drawn to her fervent speech. However, in accordance with the laws of Romanticism, their dream is fated not to come true: having poisoned herself with a toxic flower, Lakmé dies in the arms of her beloved. The plot in exotic surroundings was nothing new for French musical theatre: Delibes was following in the footsteps of Bizet's Les Pêcheurs des perles, Meyerbeer's L'Africaine, Massenet's Le Roi de Lahore and, if one goes back a century more, by Rameau's Les Indes galantes. The musical material of Lakmé is woven from extremely tender and poetic cantilena and the watercolour orchestration, which flows with refined colours and intonations. The ariosos and duets of the protagonists are framed by Hindu prayers and ceremonies, dances of bayadères and a trading scene. In Act I a group of curious Europeans secretly observes the home of the priest Nilakantha and have a friendly wager as to whether women everywhere are always similar or whether they differ.
Over the years, at the Opéra-Comique the role of the Indian beauty has been sung by Lily Pons, Mado Robin, Mady Mesplé, Natalie Dessay and Sabine Devieilhe. Among acclaimed Russian singers to have appeared in productions of Lakmé are the names of Antonina Nezhdanova, Leonid Sobinov (as Gérald), Fyodor Chaliapin (as Nilakantha), Elena Katulskaya, Irina Maslennikova and Valeria Barsova. Following the Mariinsky Theatre's 1884 production by the Italian Opera, Lakmé was staged again in 1903, 1916 and 1931.

Act I
The home of Nilakantha, a Brahmin priest, surrounded by a shady forest. It is early morning. Hindu men and women led by Nilakantha and his daughter Lakmé welcome the dawn of the new day with a prayer to Brahma. After prayer, all depart. Following the ceremony, Nilakantha, leaving his daughter to be cared for by her companion Mallika, together with his slave Hadji set out towards a sacred pagoda. Meanwhile, the girls decide to take a boat out to pick a lotus flower. In their absence, Ellen and Rose – daughters of the Governor of India – enter this place, which is forbidden to all foreigners, together with their governess Mistress Bentson and two British officers, Ellen's fiancé Gérald and his friend Frédéric. They are all eager to learn about Hindu customs, but on discovering that this is the home of Nilakantha the ferocious fanatical Brahmin they hasten to depart. Only Gérald remains behind: having by chance seen Lakmé's precious ornamental headpiece, he intends to sketch it in his album whatever the cost. Lakmé returns and her beauty stuns the Englishman. The foreigner is unperturbed at her warning that disaster and death await him should he be found in this sacred place by her father. Love for the courageous officer steals into Lakmé's heart and she, upon seeing the Brahmin in the distance, begs Gérald to hide. Nilakantha guesses that some European has visited his home from a piece broken fencing and swears revenge on this profanity.

Act II
A town square. A folk festival is at its height. Lakmé thinks wistfully of Gérald. Nilakantha, supposing the reason for her sadness to be some proffered insult, resolves to seek out her abuser. Lakmé's embarrassment on seeing Gérald, who has approached her as she was singing, reveals to the Brahmin who his enemy is. Lakmé, left alone with her beloved, begs him to run away with her. He is slow to decide. Meanwhile, a holy procession of the priests is making its way across the square. Nilakantha, grasping at a suitable moment, sneaks up to Gérald and stabs him with a dagger. The shocked Lakmé commands Hadji to carry the wounded man after her.

Act III
A forest. Lakmé stands guard over the wounded and sleeping Gérald, and when he wakes up he recounts the story of his salvation. The Englishman, enchanted by the beautiful maiden, is ready to be united with her forever and – in line with Hindu custom – drink, together with her, water from a sacred stream using the same cup. Lakmé hastens to fetch the water. In her absence, Frédéric appears and convinces his friend to come back to the regiment, which is ready to set off. Gérald is aware of a sense of duty, and he promises his friend to follow the latter's advice. When she returns, Lakmé in horror sees the alteration in her beloved and decides to kill herself with a toxic flower. Her beloved once again submits to the enchantment – and together with her drinks the sacred water from the cup. Nilakantha, on discovering Lakmé and Gérald together, wishes to kill the Englishman. His daughter, however, declares that they have been married. The poison begins to take effect, and the girl dies peacefully in the embrace of her beloved.