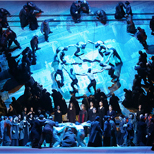 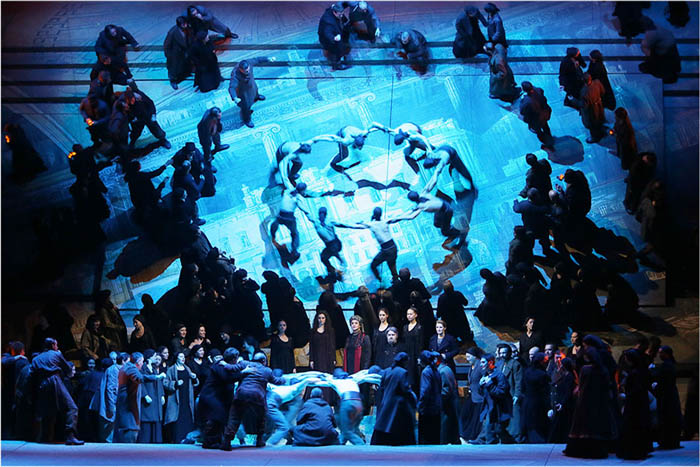 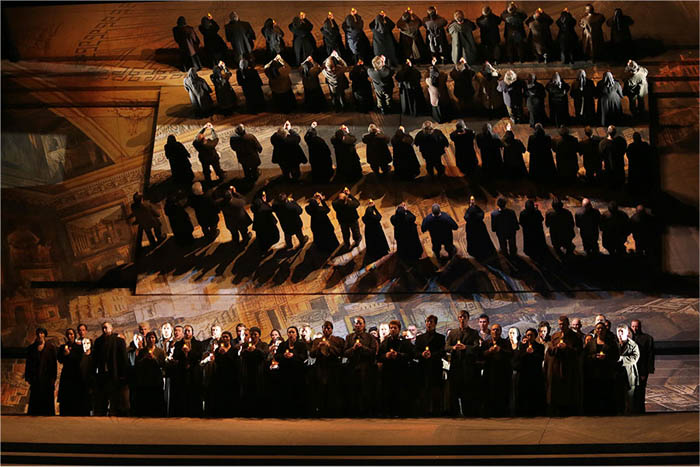 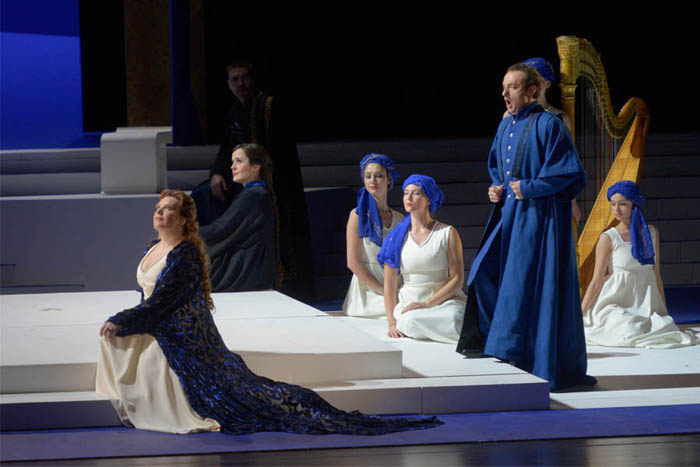 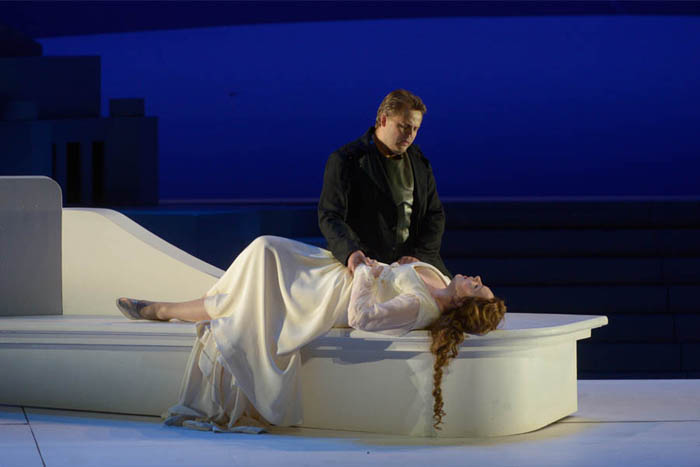 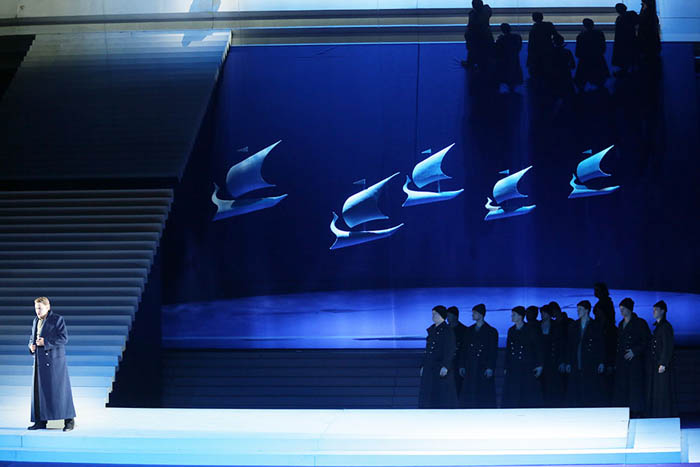 Based on the Théâtre du Châtelet-Paris’ production created by Yannis Kokkos (Premiere: 11 October 2003),
in co-production with the Grand Théâtre de Genève

Part 1
The Capture of Troy
Act I
After ten years of a failed siege of the city of Troy the Greeks are abandoning their camp. The Trojans celebrate their victory on the vacated site. They see a giant wooden horse left by the Greeks, which they regard as a gift to be presented to Pallas Athene. Cassandre, daughter of King Priam of Troy, foresees the fall of Troy and the death of her beloved Chorèbe. Cassandre tries to persuade him to flee from Troy. Chorèbe, however, does not believe her predictions.
The people come together in a hymn of praise to the gods of Olympus for the salvation of Troy; Queen Hécube and Priam himself appear. Amidst the general rejoicing Hector’s widow Andromaque, together with her son Astyanax, gives vent to her implacable grief for her warrior husband. Énée rushes in and relates that the priest Laocoön, who called on the Trojans to burn the wooden horse, has been swallowed up by sea-serpents. This is seen as the wrath of the goddess Athena, enraged at the priest’s blasphemy. Then Priam, ignoring Cassandre’s protests, orders the horse be brought into Troy. The Trojans triumphantly carry the statue towards the city. In despair, Cassandre observes the procession.

Act II
The ghost of the murdered Hector appears to the sleeping Énée. He has foreseen the destruction of Troy, and orders Énée to flee the city and travel to Italy where he is to establish a new Troy – Rome. Meanwhile, the Greeks invade the city. The Trojans are prepared to die, but will never surrender to the enemy. Énée and a group of warriors, seizing the treasures of King Priam, flee from blazing Troy. Cassandre prophesies that Énée will become the founder of a new city. Knowing that Chorèbe is dead, Cassandre cries out “Italy! Italy!” and curses her own self in order to escape Greek enslavement. The other women follow her example.

Part 2
The Trojans in Carthage
Act III
Queen Didon of Carthage, remaining loyal to the memory of her late husband Sichée, does not wish to marry the Numidian King Iarbas who desires her favour. The Carthaginians swear devotion to Didon and are prepared to protect her from the Numidian’s solicitations. Representatives of various professions – builders, sailors and peasant farmers – are presented to the Queen in turn.
At the end of the triumphant ceremony, Didon is talking with her sister Anna, who convinces her to forsake her fidelity to Sichée and free her heart to find new love. At the same time, the Queen is informed of the arrival of foreigners in the port whose ship has been wrecked. Didon agrees to allow them into the harbour. A brigade of Trojans arrives, and Ascagne presents himself and his fellow travellers to the Queen. The Trojan priest Panthée tells of a prophecy that will force Énée to travel in search of Italy.
Didon’s counsellor Narbal informs her that the cruel Numidian leader has reached Carthage with a countless horde of savages and the city has insufficient weaponry to defend itself. Then Énée of fers assistance to Carthage. Leaving Ascagne in Didon’s care, he takes command of the now-unified soldiers and hastens to meet the enemy.

Act IV
In Didon’s gardens Narbal is talking with Anna. He is worried that Didon, attracted by Énée, is ignoring affairs of State. Anna sees nothing amiss in this; Énée would be a magnificent ruler of Carthage. Narbal reminds her that the gods have decreed that Énée link his destiny with Italy, but Anna replies that there is no god on Earth more powerful than love itself.
With dances and songs the subjects praise their Queen. With Énée beside her, she gradually forgets her late husband. Didon and Énée declare their love for one another. These declarations are interrupted by the appearance of Mercure, messenger of the gods, who informs Énée it is Jupiter’s will that he leave Carthage and set out for Italy.

Act V
The sea coast of Carthage. Panthée and the Trojan leaders are discussing the terrible omens of the gods, displeased at their being delayed in Carthage. Énée’s soul is engaged in a bitter struggle between his duty, which calls him to Italy, and his love, which holds him in Carthage. He wishes to see the Queen one last time, but is confronted by the ghosts of Priam, Chorèbe, Hector and Cassandre who call to him to depart without delay.
Didon cannot believe that Énée is attempting to sail away from her in secret. Énée begs her to forgive him, denoting the will of the gods, but Didon pays no heed to these supplications and curses him. And yet she begs Anna to ask Énée once again to remain. Anna is sorry that she gave her blessing to the love between her sister and Énée. When Didon is informed that the Trojans have left Carthage, in fury she orders the Carthaginians to sail after them and sink the Trojan fleet, but then, left alone, in despair she resolves to commit suicide. At the moment of the Queen’s death, another vision comes to her: Carthage will be destroyed and Rome will become eternal. The people of Carthage and the priests curse Énée and his people.