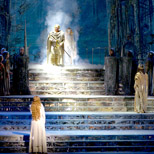 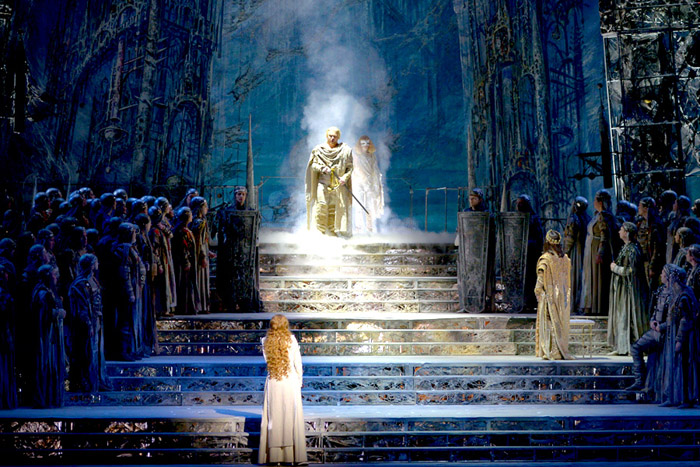 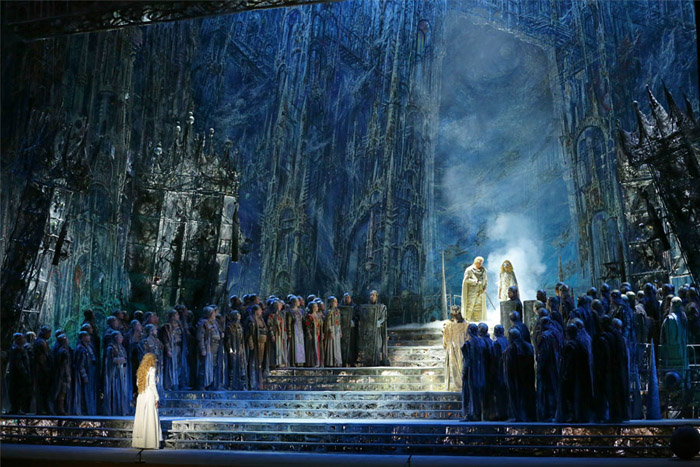 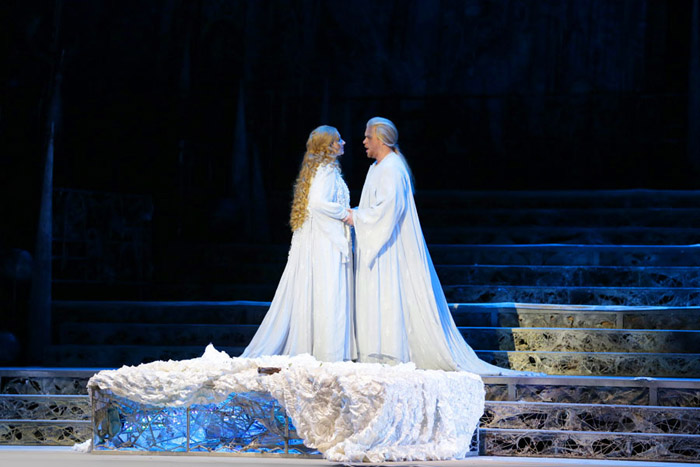 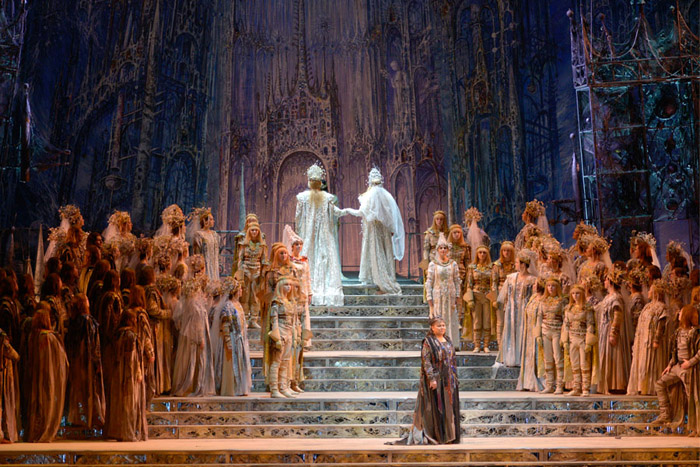 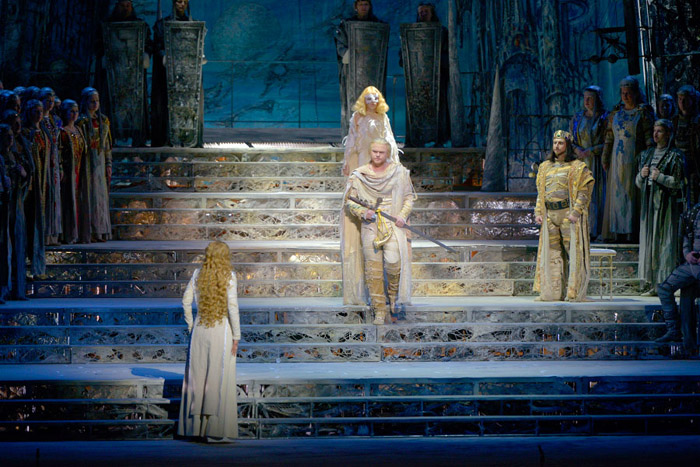 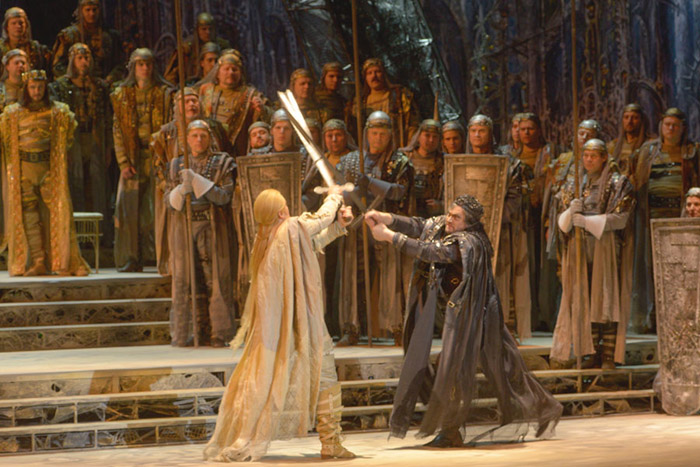 Antwerp, the first half of the 10th century. The Duke of Brabant has died, leaving his children Elsa and Gottfried as wards of his kinsman, Friedrich von Telramund, who has also been granted the right to Elsa’s hand in marriage. One day Elsa and Gottfried went to the forest, and Elsa returned alone. Suspecting Elsa of having murdered her brother in collusion with an unknown lover, Telramund has married Ortrud, the last descendant of an ancient noble family. In actual fact, Ortrud has used witchcraft to transform Gottfried into a swan, and it is she who has convinced Telramund of Elsa’s guilt.

Act I
King Heinrich der Vogler (Henry the Fowler) of Saxony has come to Brabant to recruit knights for his wars against the advancing enemy armies. By the shore of the River Scheldt he encounters Telramund, who accuses Elsa of murdering her brother and claiming the ducal throne. The King summons Elsa. Rather than answering the charge, she recounts her dream of a knight in shining armour who descends from the skies to rescue her from such accusations. Unable to reach a verdict as to whether she is guilty or innocent, the King announces trial by combat, leaving judgement to God. Telramund is prepared to fight, but who will defend Elsa? After twice repeated calls by the royal herald and Elsa’s fervent prayers, Lohengrin appears. He comes ashore from a longboat drawn by a snow-white swan. Lohengrin is prepared to defend Elsa’s honour and marry her on one condition: she must never ask his name. Elsa consents. Lohengrin wins the duel against Telramund but spares the latter’s life.

Act II
The citadel of Antwerp at night. The outcast Telramund and Ortrud are lurking in the shadows; he accuses her of deceit. Ortrud derides his cowardice, claiming that Lohengrin used evil magic powers to win the duel. To conquer Lohengrin, she and Telramund must convince Elsa to break her oath and ask the forbidden question. Elsa appears at her window; she is filled with happiness. Ortrud rouses Elsa’s pity and, affected by Ortrud’s sobs, she admits her to her chambers. Ortrud sows seeds of doubt in Elsa’s mind by suggesting that her unknown protector might one day vanish as mysteriously as he appeared. At daybreak, the herald announces Elsa and Lohengrin’s impending marriage; Telramund is to be banished. Lohengrin refuses the dukedom, wishing to be known only as “Protector” of Brabant; he will lead the army of Brabant against its foes. The wedding procession begins. On the steps of the church, Ortrud – following after Elsa – suddenly accuses Lohengrin of witchcraft. Telramund accuses him of the same deed. But only Elsa is entitled to demand that the knight reveal his secret. Elsa is confused, but in the end decides not to ask and the wedding ceremony continues.

Act III
A wedding procession accompanies the newlyweds to their chamber, where Telramund and his two co-conspirators are lying in wait. Lohengrin and Elsa, alone for the first time, speak of their love. However, Elsa’s anxiety grows ever more intense. When, at last, she asks Lohengrin the fateful question Telramund and his vassals suddenly appear. Telramund falls, slain by Lohengrin’s sword. Lohengrin announces that he will answer Elsa in the presence of the King.
The King welcomes the knights who have gathered to fight the enemy. Telramund’s dead body is carried in, followed by the grief-stricken Elsa and the gloomily triumphant Lohengrin. He declares that he cannot lead the King’s troops into battle. In self-defence he killed Telramund; he accuses the latter’s wife of breaking her vows to him. The knight reveals his secret: he is the son of Parsifal, sent to earth by the brotherhood of the Holy Grail to protect the innocent and the oppressed. The knights of the Grail have immense power albeit under one condition: no-one must ever know their names and from where they have come. Lohengrin’s secret has been revealed and now he must depart. The swan appears, drawing the longboat. Lohengrin bids a fond farewell to Elsa: one more year and the beautiful bird’s tragic fate would have come to an end. The Grail would have set the bird free and restored Elsa’s brother to her. Lohengrin gives her three gifts for Gottfried when he at last comes back: a sword, a horn and a ring. In a frenzy of rage Ortrud reveals that it was she who transformed Gottfried into a swan, casting a golden chain around his neck. Lohengrin prays silently; the evil spell is broken. The swan is transformed into the handsome young Gottfried. Lohengrin proclaims him Duke of Brabant and departs. Elsa falls senseless in her brother’s arms.