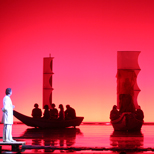 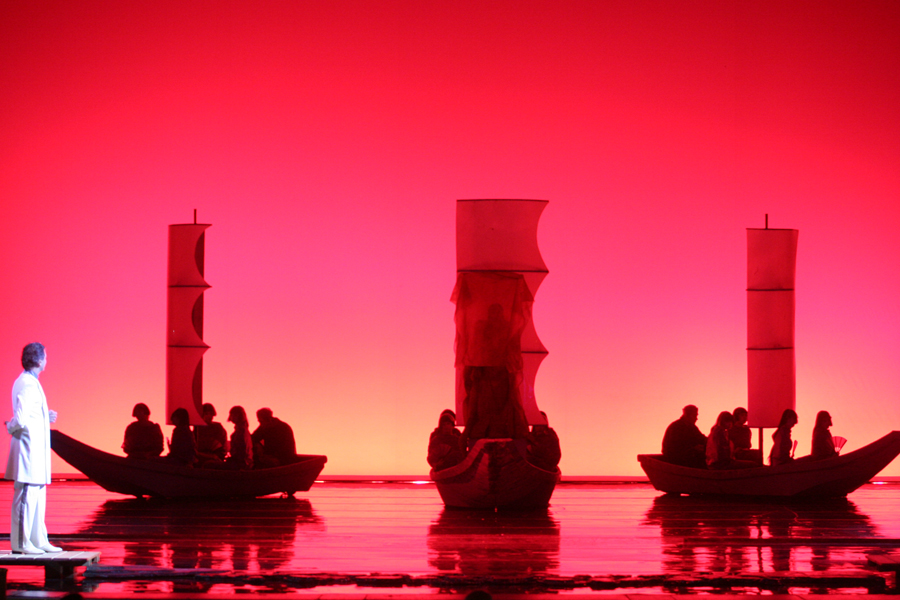 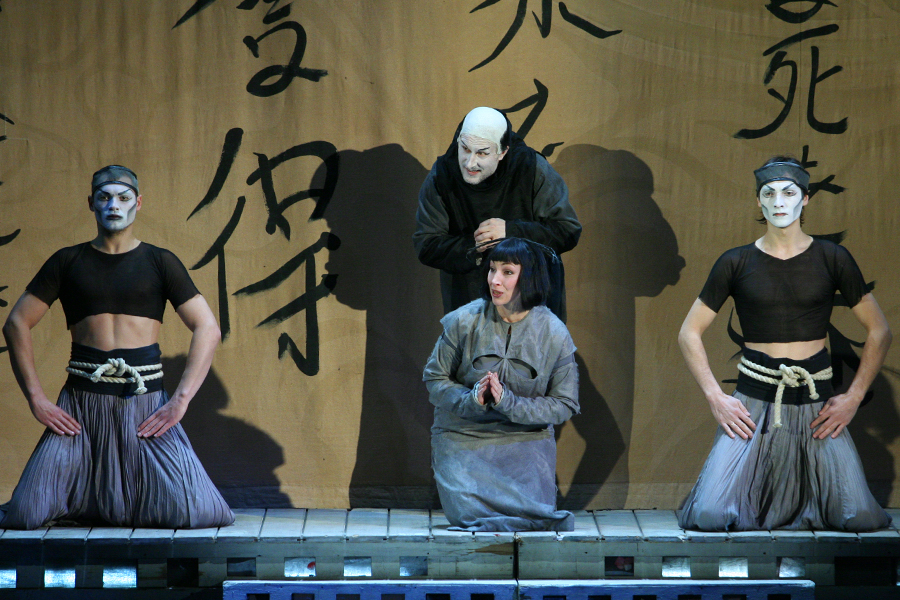 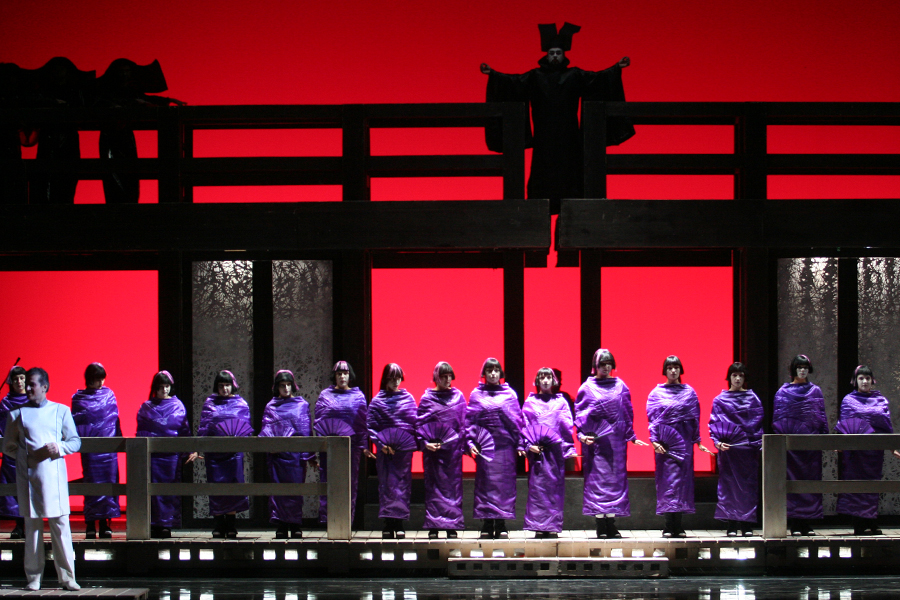 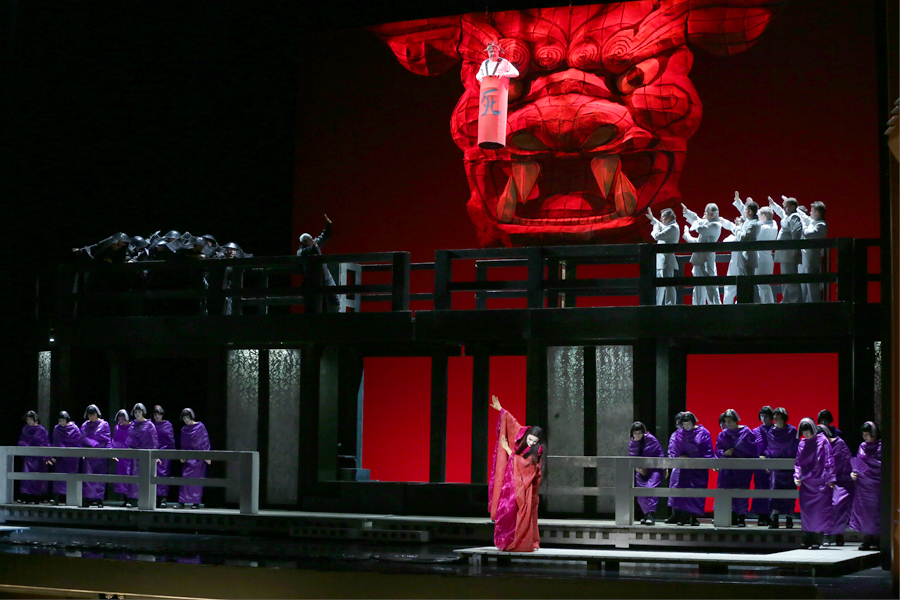 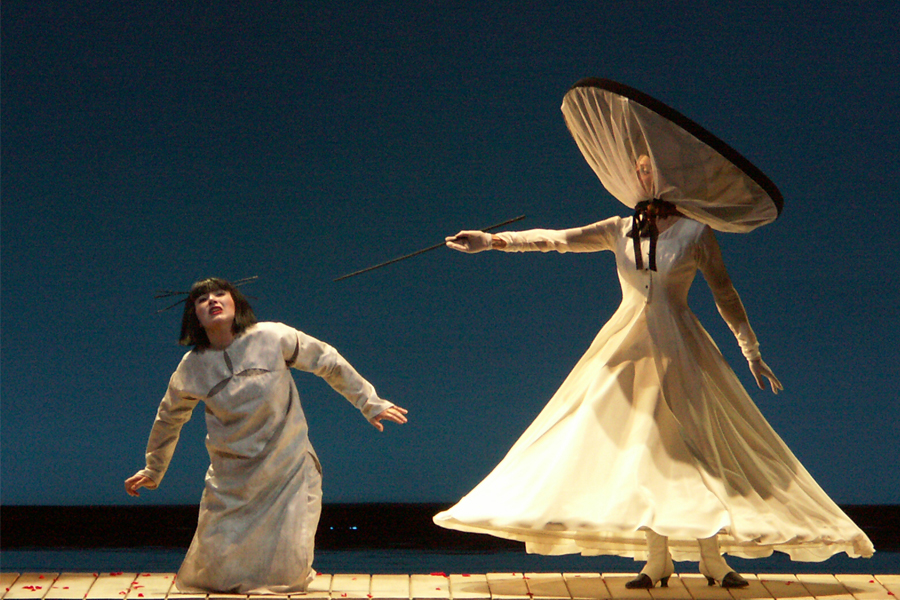 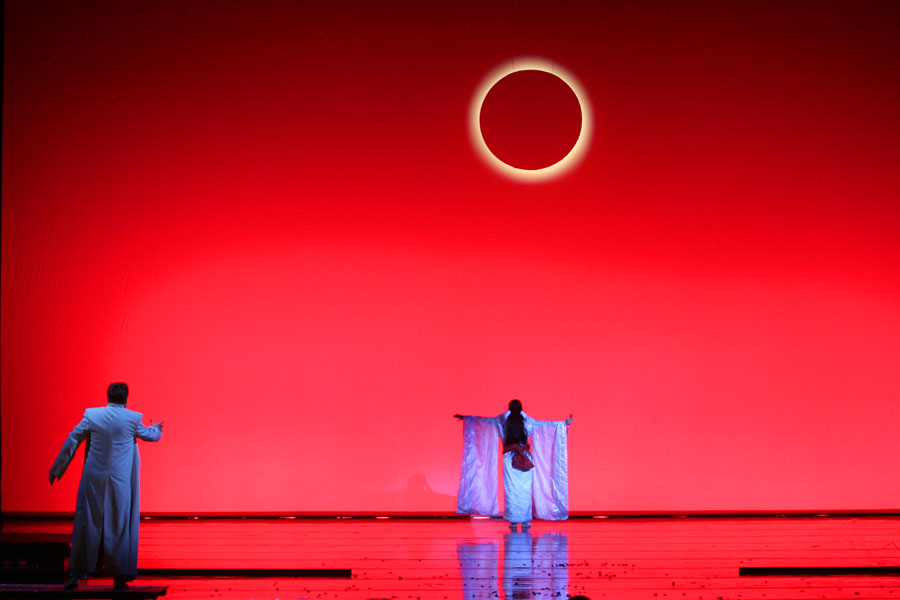 Act I
Pinkerton buys a house. He tells Sharpless of his infatuation for a Japanese girl and of his intention to marry her for "nine hundred and ninety-nine years", with the privilege of annulment when convenient. Pinkerton’s levity upsets Sharpless, who tries to convince the lieutenant of the gravity of a relationship with a Japanese girl. Pinkerton repeats how intensely he loves her.
Laughing voices of Japanese girls are heard and Cio-Cio-San appears. She introduces her relatives and friends to Pinkerton. Presently, she informs her beloved that for his sake she has renounced her religion. The marriage ceremony is interrupted when Cio-Cio-San’s uncle appears to condemn his niece for renouncing her people. Contemptuously, her relatives spurn the girl and depart. Butterfly bursts into tears but is soon soothed by Pinkerton’s tenderness. As night descends, the lovers are happy in each other’s arms as they confide their passionate feelings.

Act II
In Butterfly’s house Suzuki prays before an image of Buddha. Butterfly chides her gently for appealing to a Japanese god. Still, Butterfly is faithful to Pinkerton, who has been forced to leave with the American fleet, and she is true to his religion and country, certain that some fine day he will come back to her. Sharpless brings Butterfly a letter which she is about to read when the marriage broker arrives with a wealthy suitor. Butterfly is deaf to all propositions. When Sharpless inquires what Butterfly would do if Pinkerton were to desert her, she answers gravely that she would kill herself. She now calls in the child, Little Trouble, who is the fruit of their love. Sharpless now knows that a terrible tragedy is imminent. Suddenly there comes from the harbor the sound of a cannon shot. Cio-Cio-San notices the ship arriving and learns that
Pinkerton has returned. In anticipation of her beloved’s return, Butterfly helps Suzuki decorate the house with cherry blossoms. She then dons her wedding dress, but day passes into night with no sign of Pinkerton.

Act III
Dawn has come. Weary of her vigil, Butterfly goes to an inner room. While she is absent, Pinkerton and Sharpless arrive at Butterfly’s house. Suzuki is overwhelmed with joy at the sight of Pinkerton, but when she sees an American woman at Pinkerton’s side she senses the worst.
Sharpless persuades Pinkerton to leave without seeing Butterfly.
After a tender farewell to the house and his memories, Pinkerton departs. When Butterfly rushes into the room she finds not Pinkerton, but Sharpless and a strange woman. When she sees her servant in tears she begins to understand what has happened. The American woman – Pinkerton’s wife Kate – implores Cio-Cio-San to turn over to her Pinkerton’s child. At last, Cio-Cio-San is ready to do this – but only on condition that Pinkerton himself makes the request. When Sharpless and Kate leave to call Pinkerton, Butterfly raises a dagger to her throat. Little Trouble appears. Butterfly bids her child farewell... Then she goes behind a screen with her dagger. A moment later she staggers out; by the time Pinkerton appears, she is dead.
Pinkerton is overwhelmed with grief.