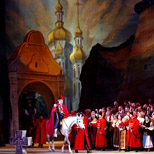 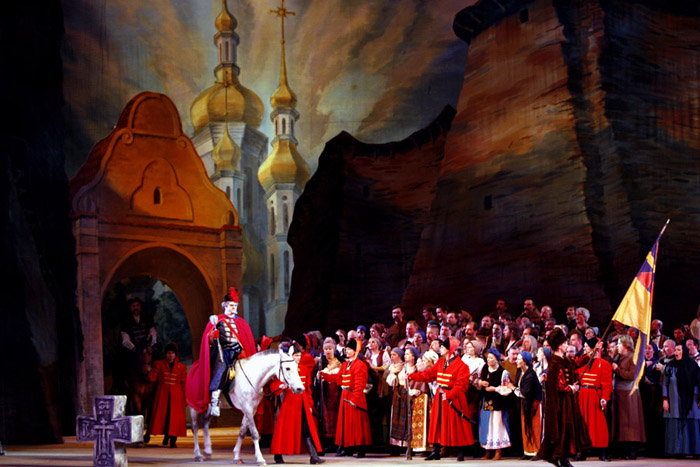 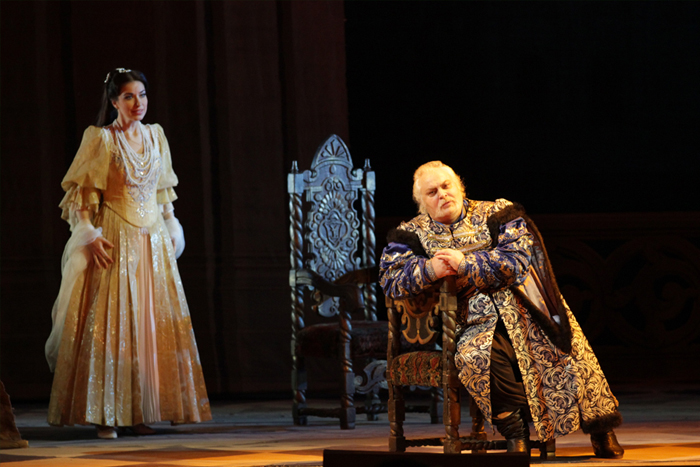 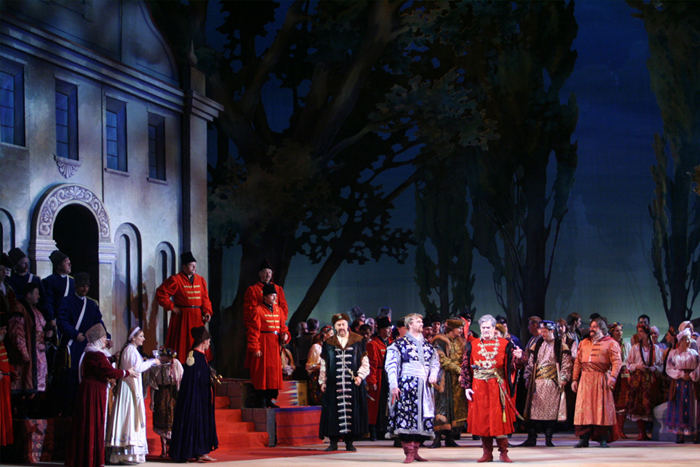 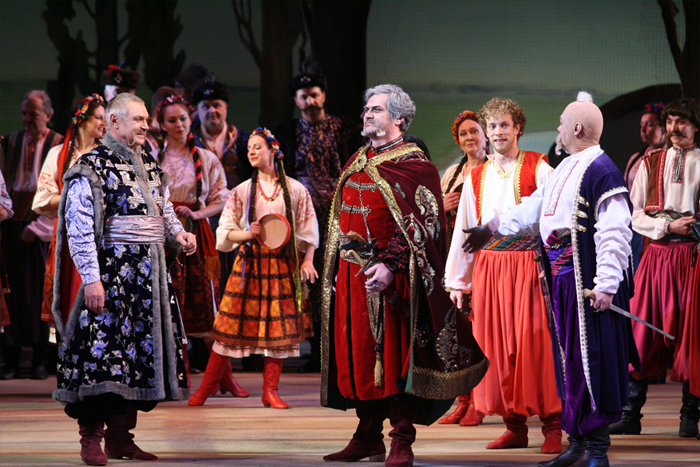 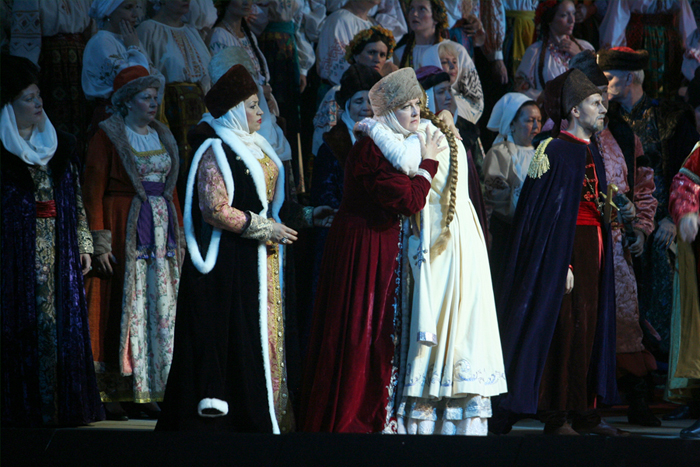 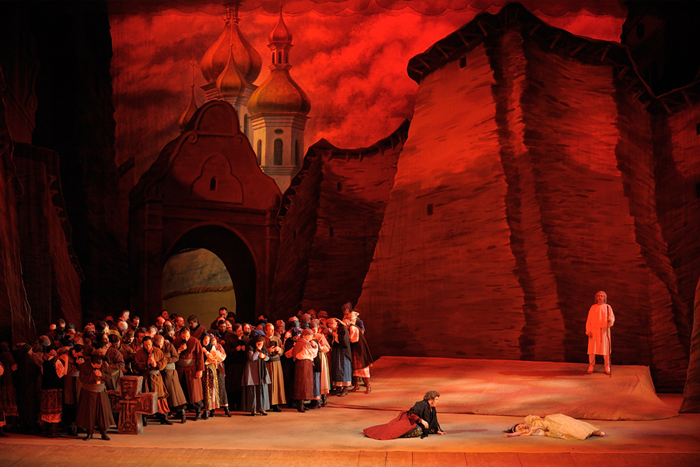 SYNOPSIS
The action is set in the Ukraine in the early 18th century.

Scene 1
Kochubei’s house and garden.
The girls bring in Maria, Kochubei’s daughter, and take her off to have her fortune told. She refuses: her father has a guest, the hetman Mazepa whom she loves.
Her childhood friend, Andrei the Cossack, knowing of Maria’s secret passion, nevertheless declares his unrequited love for her and begs her to forget Mazepa. Maria, understanding the full recklessness of her feelings, is nonetheless powerless to resist them.
Kochubei enters the garden with his wife Lyubov, Mazepa and the other guests. Kochubei’s servants amuse Mazepa with singing and dancing. Mazepa asks Kochubei for Maria’s hand in marriage. Kochubei and Lyubov are incensed at the old hetman’s proposal – he is Maria’s godfather. The hetman turns to Maria and offers her a choice between him and her parents. After tortuous hesitation, she gives her hand to Mazepa. The hetman takes Maria away.

Scene 2
A room in Kochubei’s house.
Maria’s mother is lamenting her daughter, who has left her father’s home. She urges her husband to take revenge on Mazepa. Kochubei reveals his plan: he has found out about the links between the hetman and Sweden’s King Charles XII and of Mazepa’s proposed betrayal of Peter I, and he resolves to present the hetman to the Russian Emperor.
Andrei is ready to deliver the denunciation to the Emperor. Kochubei’s acquaintances are filled with hatred for the hetman Mazepa.

Scene 3
A cellar in Mazepa’s palace in Belotserkovsk.
The lying hetman, having been warned of his denunciation by Peter I’s retainers, has succeeded in slandering Kochubei to the Emperor. Bound in chains and having been tortured, both Iskra and Kochubei await interrogation.
Orlik, the hetman’s retainer enters. He demands that Kochubei give up the treasure he has allegedly buried in the village of Dikanka. Kochubei has nothing: his honour has been despoiled and his beloved daughter taken from him by Mazepa.
Kochubei desires one thing only – revenge.

Scene 4
A room in Mazepa’s palace.
The hetman is receiving in secret the ambassadors of the Swedish King. Orlik enters and receives the order to execute Kochubei.
Maria appears. In a talk with Mazepa, she upbraids him for his coldness towards her. Jealous suspicions torment her soul. Unwillingly, the hetman must state the true reason for his coldness, and he reveals the secret plan against the Russian Emperor. Mazepa wants to know whom Maria would choose: her father or her husband, if she was forced to make that choice? In disarray, she speaks of the boundless nature of her love, saying she does not understand the choice Mazepa is offering. Mazepa leaves. Having secretly gained access to the palace, Maria’s mother appears; she tells her daughter of the failed plot against Mazepa, and is stunned that her daughter does not know about the death that awaits her father. Maria and Lyubov hasten to stop the execution.

Scene 5
The road leading to Kochubei’s place of execution.
The people await the appearance of the sentenced men, while a drunken Cossack sings and dances in the crowd.
The executioner appears, followed by Mazepa and Orlik, then Kochubei and his friend Iskra are brought in. The sentenced men bid farewell to one another, to the people and to life and they mount the scaffold. Maria and Lyubov run in. But they are too late. Sentence has been carried out.

Scene 7
Kochubei’s former home and garden.
The height of the battle, and the Russian warriors are pursuing the Swedes; Andrei is among them. He stops by the roadside and recalls the past when he was happy. Mazepa and Orlik appear. The y have fled the battle at Poltava. Andrei, recognising Mazepa, attacks him with his sword, but Mazepa is too quick for Andrei and wounds him fatally.
Maria appears; she has lost her mind; she recognises nothing around her. Drowning in grief, the girl laments her murdered father.
Orlik and Mazepa hide. Not recognising the dying Andrei, Maria soothes him with a lullaby.