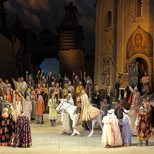 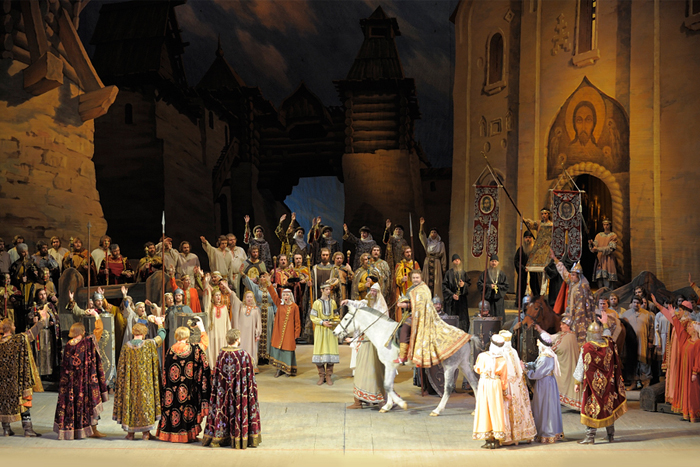 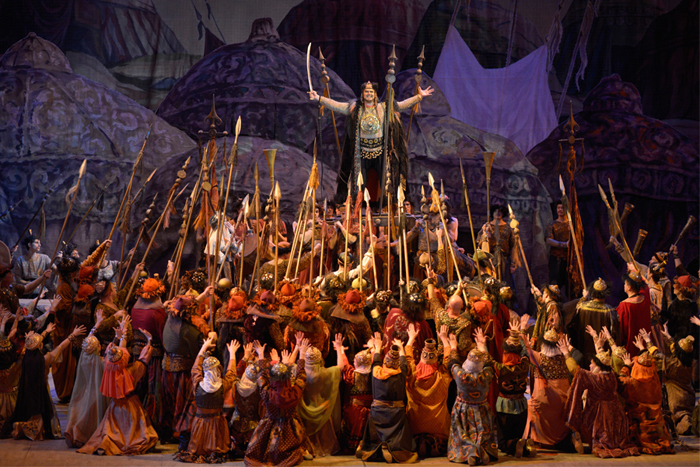 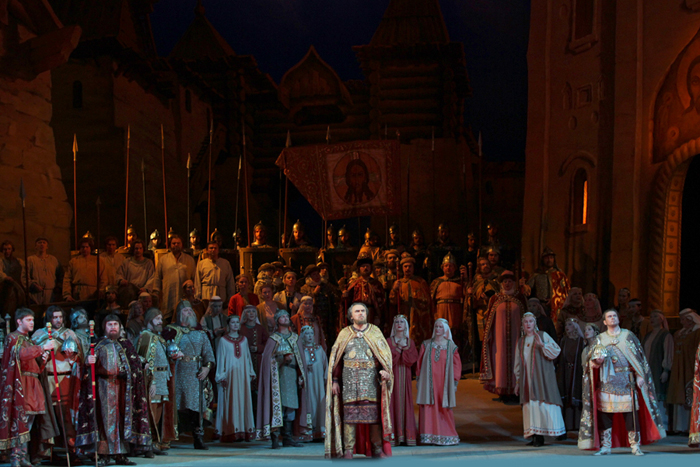 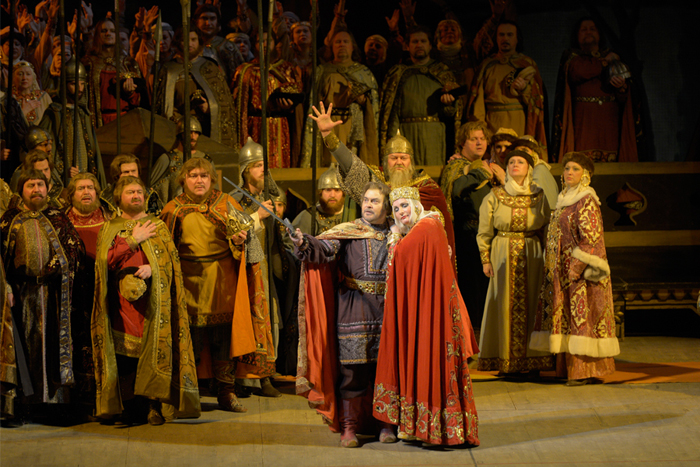 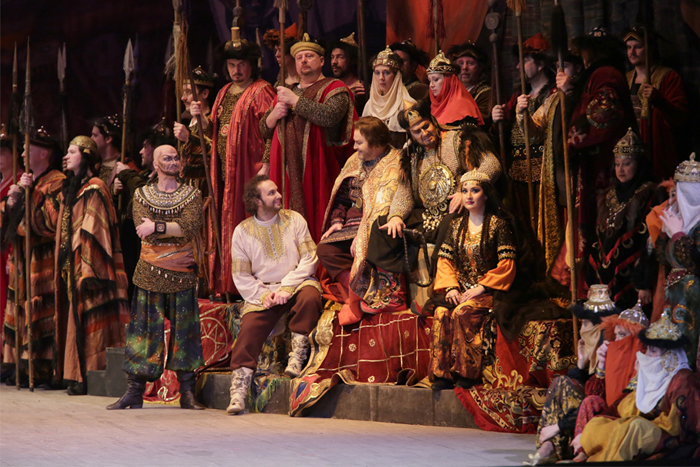 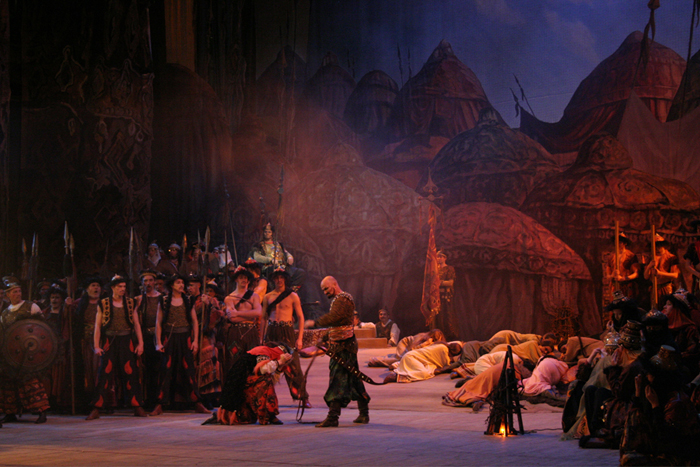 PROLOGUE
A Square in the Ancient Russian City of Putivl
Prince Igor, together with his son Vladimir and his army of warriors, is getting ready for a campaign against the nomadic Polovtsians who are launching devastating attacks on Russia’s virginal lands. The people greet Igor and the warriors and wish them victory.
Suddenly it gets dark – a solar eclipse begins. The people, the princes and the boyars regard this as an ill omen, an inauspicious sign, and advise Igor to put off the campaign. The Prince’s wife Yaroslavna also implores him to stay at home. But Prince Igor is unbending. He is certain that his cause is just – he will defend Russia.
The prince bids farewell to his wife and tenderly consoles her, giving assurances that she need not worry about him and should await his victorious return. He entrusts Yaroslavna to the care of her brother, Prince Vladimir Galitsky, whom he appoints as his deputy in Putivl.
Unnoticed, two warriors, Skula and Yeroshka, leave Igor’s army; it is their intention to join the service of Prince Galitsky.
After being blessed, Igor and his detachment set off for the campaign.

OVERTURE
Evening in the Polovtsian Camp
The Polovtsian maidens are trying to amuse Konchakovna, the daughter of Khan Konchak, with songs and dances. All her thoughts are focussed on the captive youth – Prince Vladimir.
Konchakovna impatiently waits for a moment when she can see him.
Igor’s son Vladimir appears, and is charmed by Konchakovna.
But Prince Igor does not wish even to hear of Vladimir’s marriage. Konchak, however, agrees to marry his daughter to the Russian prince.
Prince Igor cannot sleep. He is oppressed by gloomy thoughts. It is not easy to overcome the shame of defeat and captivity. It is hard to accept the thought of his native land being enslaved. Igor passionately yearns for freedom in order to liberate Russia. He tenderly recalls his beloved wife Yaroslavna.
Suddenly Ovlur, a baptized Polovtsian, comes to him. He offers Igor his help to escape from captivity. But the latter refuses – a Russian prince ought not to flee.
The Polovtsian Khan Konchak bestows high honours on Igor as his honoured guest. He promises to free him if he agrees never to raise his sword against the Polovtsians again. But Igor rejects Konchak’s proposal and does not hide his intentions: once free he will assemble his forces and make war against the Polovtsians once more.
The pride and valour of the Russian prince delight Konchak.
On the Khan’s orders, the captive women and warriors entertain Igor to dispel his gloomy thoughts with dances glorifying the mighty Konchak.

ACT II
The Polovtsian Camp
Khan Gzak, sent on a campaign by Konchak, returns with captive Russians and rich plunder. Knowing of the disaster that has befallen his native Putivl, Prince Igor regrets his deeds and calls on the Russian princes to unite together. To save their native land, Igor conceives a plan to escape. Konchakovna raises the alarm. But Igor and Ovlur manage to take cover. The wrathful Polovtsians demand the death of his son Vladimir, but Konchak not only grants him pardon, but decides that Konchakovna may marry Vladimir into the bargain.

The City Walls of Putivl
In the morning, Yaroslavna, having abandoned all hopes of Igor’s return, mourns his loss. Addressing the wind, the sun and the River Dnepr, she awaits their answer: where is Igor and what has happened to him? Yaroslavna’s lament is repeated by the mournful song of the villagers who lament the destruction and scorching of the land.

The Court of Prince Vladimir Galitsky
Prince Galitsky is feasting at a lavishly laid table, with his servants led by Skula and Yeroshka. His power is limited – he would like to send Yaroslavna to a nunnery and become the Prince of Putivl by dethroning Prince Igor.
Agitated maidens run into the courtyard. They beg Prince Galitsky to liberate their girlfriend who was taken by warriors into a chamber for amusement. But the prince drives the maidens out to the amusement of the drunken crowd.
The drinking-bout reaches its culmination. Skula and Yeroshka, bribed by Prince Galitsky, together with the warriors whose boldness grows from the revelry incite the people to mutiny: “We shall depose Igor and elevate Vladimir to the throne! What do we have to fear?”

A Chamber in Yaroslavna’s Terem Palace. Alarm
The Princess feels uneasy. Troublesome dreams and gloomy presentiments remain with her day and night. She has had no news from the Prince for a long time. And she sees the strife and plotting around her by the princes, even her own brother Vladimir has conceived some evil deed, hoping to dethrone Prince Igor and become the Prince of Putivl.
The sudden arrival of the girls whom Prince Galitsky has driven out from the court distracts Yaroslavna from her sad thoughts. The girls implore the Princess to defend them from their offender. Yaroslavna accuses her brother of treason and treachery, but she cannot reason with him. Called on by the Princess to answer, Prince Galitsky conducts himself impertinently, claiming power in Putivl.
The boyars arrive with gloomy news: Igor’s armed force has been defeated and the Prince himself imprisoned with his son; the Russian princes wallow in dissent, while hordes of Polovtsians march on Russia. Disturbed by what she has heard, Yaroslavna wishes to interrogate the messengers herself. Meanwhile, Prince Galitsky and his servants seize the moment and stir up a rebellion. The alarm bell is heard, heralding danger – the Polovtsians are approaching Putivl. The boyars and the people are filled with resolve to defend their lands.