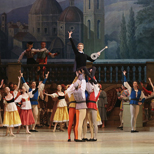 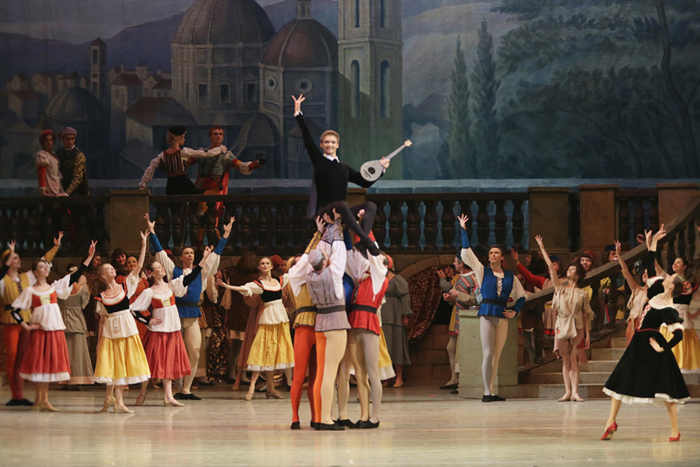 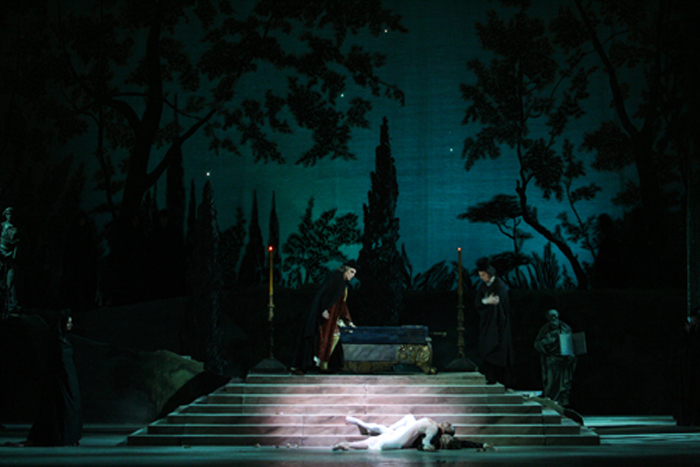 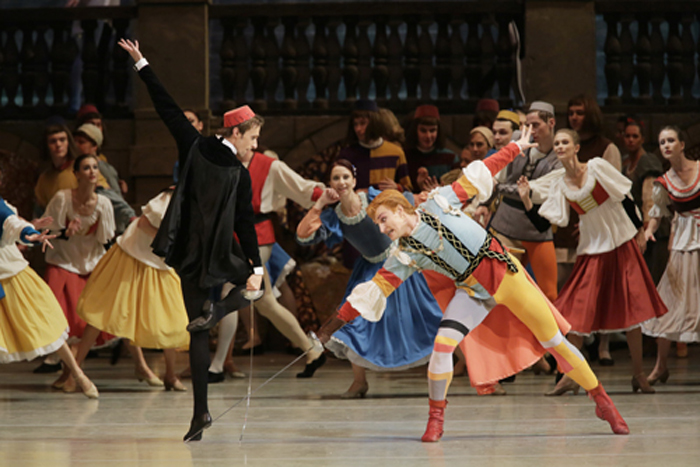 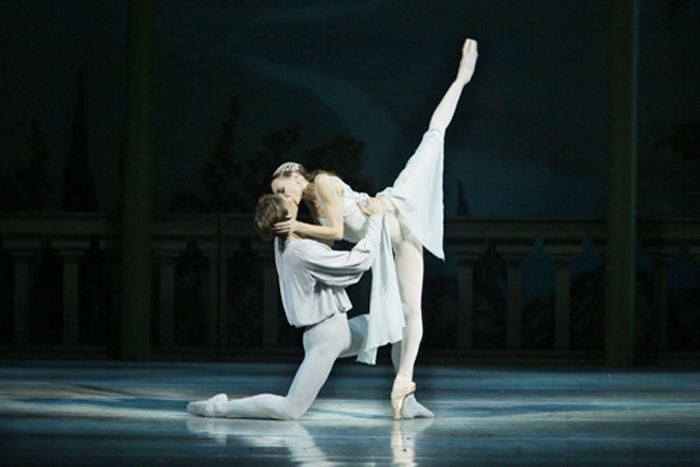 From the present day point of view, the production has many positive qualities: the clearly defined story line; the elegant, refined dance, the lyrical duets; the sets by Pyotr Williams, the faded grandeur of which precisely conveys the atmosphere of Renaissance Italy. Here, too, absolute faith and self-giving from the two lovers, from the very depths of their souls, is essential. It is this that is brought to the ballet by the soloists of the Mariinsky Ballet Company. They are stunning; they are of those dancers who, it would appear, know instinctively that they are born for the stage.

Act I
Scene 1
It is early one morning. Romeo, dreaming of love, wanders through the deserted streets of Verona. Little by little, all sorts of people fill the square and the first customers arrive at the inn.
Tybalt, noticeably drunk, is on his way home. He sees Benvolio and, drawing his sword, attacks him immediately. The peaceful square turns into a scene of fierce fighting between the supporters of the Montague and Capulet households. Swords cross, people are killed and the alarm is sounded.
Paris, a young nobleman, appears. He has come to ask for the hand of Juliet, the beautiful daughter of Old Capulet. Nobody heeds him. Old Capulet himself is seen running out of his house, eager to play a part in the encounter with the Montagues.
The Duke of Verona and his guards appear in the square. The people implore him to put a stop to the bloodshed. The Duke commands them to drop their weapons, and issues a decree stating that anyone who bares arms in the streets of Verona will be sentenced to death.

Scene 2
Juliet playfully teases her old nurse, who is helping her dress for the imminent ball. Juliet’s mother enters and scolds her daughter for her childishness.

Scene 3
Guests pass in a ceremonious parade to the ball at the Capulets’ house. Paris is amongst them, accompanied by his page. Romeo’s friends, the witty Mercutio and the loyal Benvolio, persuade
him to go to the ball with them. The young men put on masks; without them they cannot go to the feast because of the feud between the two families.

Scene 4
Romeo and his friends enter the Capulets’ palace. Romeo is captivated by Juliet’s beauty and cannot conceal his emotions. By accident, his mask slips, revealing his face to Juliet. She falls in love with the youth.
Tybalt recognises Romeo as an enemy of the Capulets and hurries off to tell Old Capulet that Romeo has dared to come to the ball. Romeo and his friends leave the house to avoid trouble.

Scene 5
On a moonlit balcony of the Capulets’ house, Juliet dreams of seeing Romeo again.
Her dream comes true as Romeo appears in the garden below. He stretches out his arms to her in an expression of love. A moment later, they are together. They tenderly declare their love and vow eternal fidelity to each other.

Act II
Scene 6
In the noisy gaiety of the square in Verona, Juliet’s nurse hands Romeo a letter from her young mistress. Romeo reads it with delight, for Juliet has agreed to be his wife.

Scene 7
Friar Lawrence is happily passing the day in his quiet cell. Romeo enters and begs the monk to wed him to Juliet in secret. The friar promises to help, hoping that the marriage will reconcile the Montagues and the Capulets and thus end the feud. Juliet enters and Friar Lawrence performs the wedding rites.

Scene 8
Mercutio, Benvolio and their friends have come to the inn. Tybalt enters and, upon seeing his enemies, he draws his sword and rushes at Mercutio. Romeo tries to make peace between them. Tybalt pushes him away. Tybalt and Mercutio cross swords. Romeo again attempts to separate them, but Tybalt, seizing a favourable moment, deals Mercutio a treacherous blow and kills him.
Romeo is wild with fury at the death of his friend. He draws his sword and challenges Tybalt to a duel. Tybalt is killed. Benvolio, frightened, points to the decree posted by the Duke of Verona and leads his friend away. Tybalt’s kinsmen gather round his dead body and swear vengeance on the House of Montague.

Act III
Scene 9
Romeo has come to bid farewell to Juliet. He is ready to flee Verona, having violated the Duke’s decree. As the rays of the morning sun stream into the room, Romeo takes leave of his beloved. The nurse comforts Juliet, who is heart-broken at her separation from Romeo. Juliet’s parents enter the room, and her mother tells her that her marriage to Paris has been arranged. Paris, who has also come in, declares his love for Juliet; she listens to his passionate avowals, but refuses
to comply with her parents’ wish. When Paris has left the room, they shower her with reproaches. Her father says firmly that he is determined to have his way.
Juliet is in despair. She makes up her mind to go to Friar Lawrence for advice.

Scene 10
Juliet comes to Friar Lawrence’s cell. The monk is touched by the tale of her boundless love for Romeo and gives her a potion. His plan is that she will drink the potion and fall into a deep sleep. She will be thought dead, and her body will be taken to the family vault – in an open coffin according to the ancient custom of the country. Meanwhile, Friar Lawrence will write to Romeo who is hiding in Mantua and summon him back to Verona. The young man will return at once.
Juliet will have awoken by that time and Romeo will take her away with him back to Mantua.

Scene 11
When Juliet returns home, she pretends to have submitted to her parents’ will. She takes the potion and falls into a deep sleep. Juliet’s friends come in with bunches of flowers and, unable to find her, believe her to be still asleep. Her parents enter, accompanied by Paris. The nurse draws
the curtains of Juliet’s bed aside. All are paralysed with horror – Juliet lies lifeless on her couch.

Scene 12
Mantua. It is night. Romeo is alone, lost in gloomy thoughts. He has had no news from Juliet. Friar Lawrence’s messenger has not arrived. Benvolio, who has just come from Verona, rushes to Romeo and tells him of Juliet’s death. Romeo hurries back to Verona.

Scene 13
At the cemetery in Verona, the mourners, sad and silent, take their last farewell of Juliet and depart. Romeo enters the vault. He cannot take his eyes off his beloved; she is dead, and life no longer has any meaning for him. Romeo swallows some poison and falls dead at her feet. Juliet wakes up to see Romeo dead. Snatching his dagger, she stabs herself.
The people assembled at the cemetery watch as Old Montague and Old Capulet gaze sorrowfully at the bodies of their dead children. In silence, they stretch out their hands to each other.
The tragic death of the two lovers was the price to pay to end their long and bloody feud.