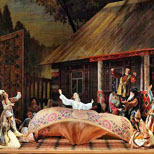 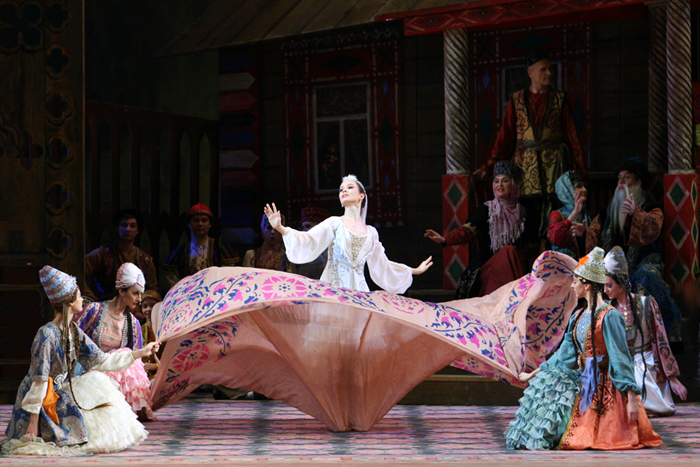 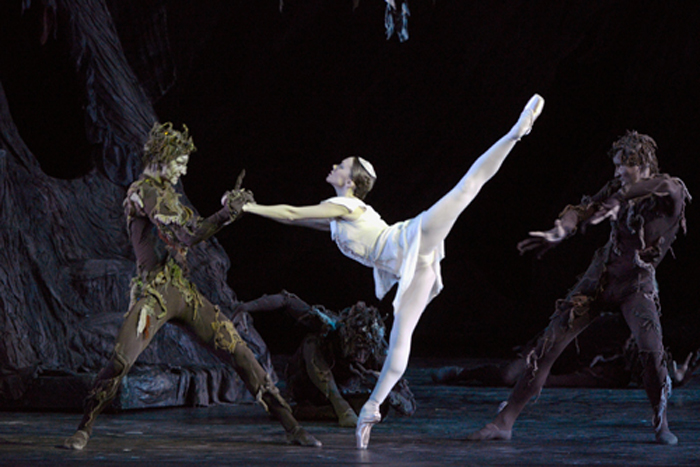 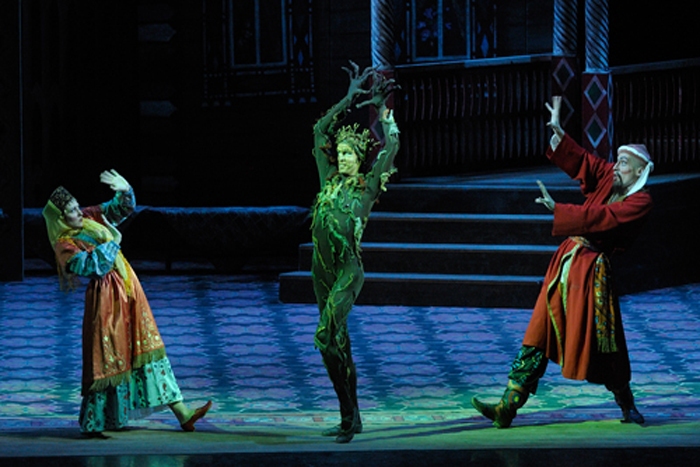 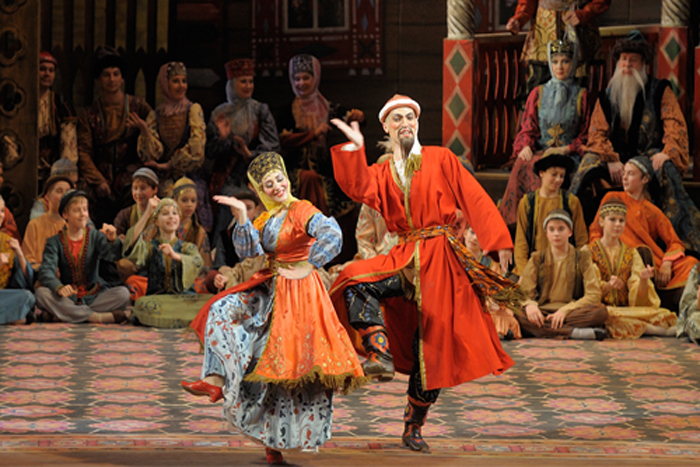 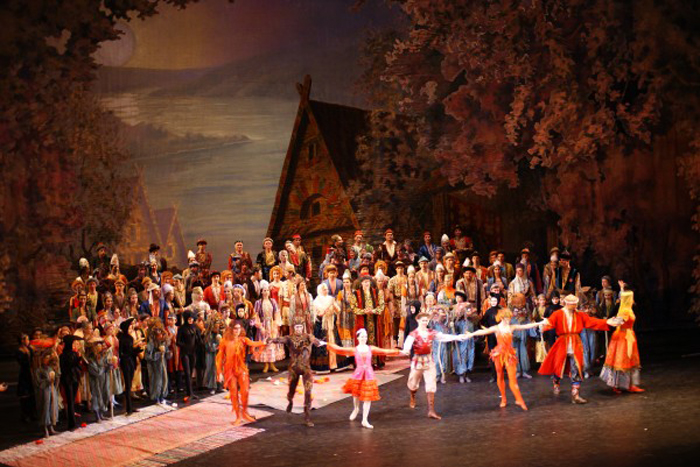 Act I
In a dense forest, the evil master of the woods Shurale is inside the trunk of a tree.
Ali-Batyr, a young hunter, appears in the forest clearing. Seeing a bird fly past, he seizes his bow and arrow and sets off after the bird. Shurale emerges from his lair. All the wood spirits that he rules awake. Genies, witches and evil spirits entertain their master with dances.
As the sun begins to rise, the evil spirits hide. A flock of birds comes down on the clearing. They spread their wings and transform into young maidens. The girls frolic through the forest. The last to abandon her wings, the beautiful Syuimbike follows them into the woods. Shurale, keeping an eye on her from behind a tree, steals the wings and drags them back to his lair.
The girls emerge from the woods. They perform merry round dances in the clearing. Unexpectedly, Shurale jumps out at them from behind the tree. Startled and frightened, the girls pick up their wings and, transformed into birds, take to the skies. Only Syuimbike is left to wander around, having been unable to find her wings. Shurale orders the evil spirits to surround the girl. She is a prisoner and terrified. Shurale is prepared to celebrate his victory, but Batyr rushes out from the forest and hurries to Syuimbike’s assistance. The furious Shurale wishes to strangle Batyr, but the youth knocks the monster down to the ground with one powerful blow.
In vain, Syuimbike and her saviour look for the wings everywhere. Tired of the fruitless search, in torment Syuimbike drops to the ground and falls asleep. Batyr carefully picks up the sleeping bird-maiden and leaves with her.
The defeated Shurale threatens Batyr with a pitiless revenge for having kidnapped the bird-maiden from him.

Act II
Batyr’s courtyard. All the fellow-villagers have come to a banquet in honour of Batyr and the beautiful Syuimbike. The guests make merry and the children romp around. The bride alone is sad. Syuimbike is unable to forget her lost wings. Batyr tries to distract the girl from her gloomy thoughts. But neither the Dzhigits’ dances nor the Maidens’ round dances bring any cheer to Syuimbike.
The celebration ends. The guests depart. Unnoticed by anyone, Shurale slips into the courtyard. Seizing a suitable moment, he throws Syuimbike her wings. In delight, the girl hugs them to her breast and wants to fly off, but in indecision she stops: she would be saddened to abandon her saviour. But the desire to take to the skies is stronger. Syuimbike takes to the air in flight.
Immediately she is surrounded by a flock of carrion crows sent by Shurale. The bird makes a bid for freedom, but the carrion-crows force her to fly towards the lair of their master.
Batyr enters the courtyard. He sees the poor bird flying away in the sky, beating her wings inside the circle of black crows. Seizing an incandescent torch, Batyr follows in pursuit.

Act III
Shurale’s lair. Here the bird-maiden is languishing in captivity. But Shurale cannot break Syuimbike’s iron will and the girl rebuffs his advances. In fury, Shurale wishes to give her to the evil wood spirits to be torn to pieces.
At this instant, Batyr runs onto the clearing with a flaming torch in his hand. At Shurale’s demand, all the witches, genies and Shurale’s minions attack the youth. Batyr then sets light to Shurale’s lair. The evil spirits and Shurale perish in the fiery flames.
Batyr and Syuimbike are alone amidst the storming inferno. Batyr hands the maiden her wings – the only way to salvation. But Syuimbike does not wish to abandon her beloved. She throws her wings into the flames – let them both perish in fire. Then the forest fire suddenly dies away. Free of the evil spirits, the forest is miraculously transformed. Batyr’s parents and the two matchmakers appear. They wish happiness to the groom and his bride.