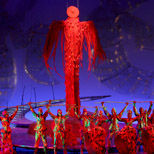 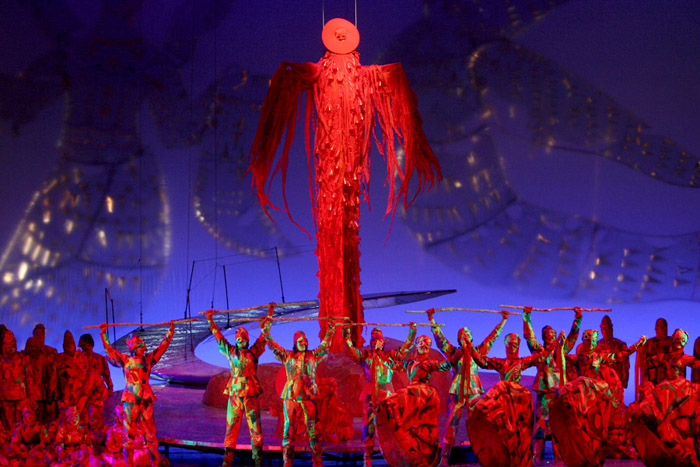 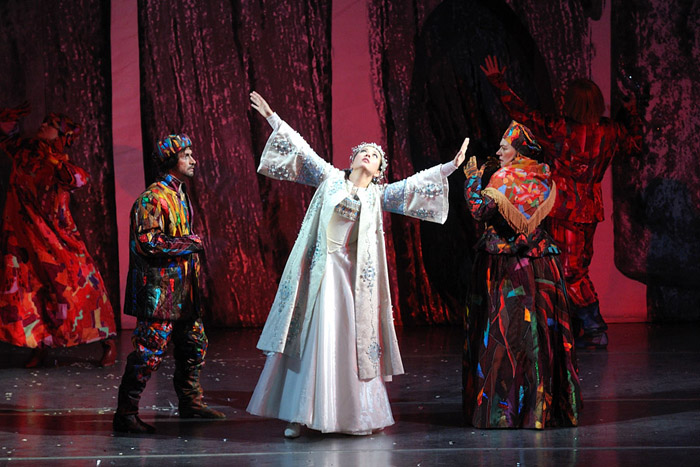 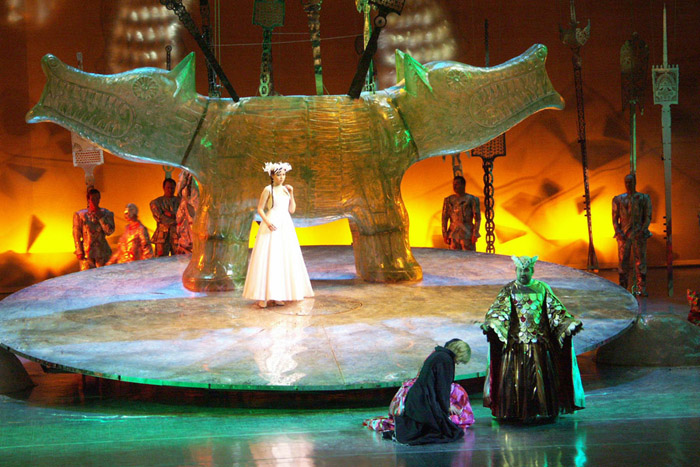 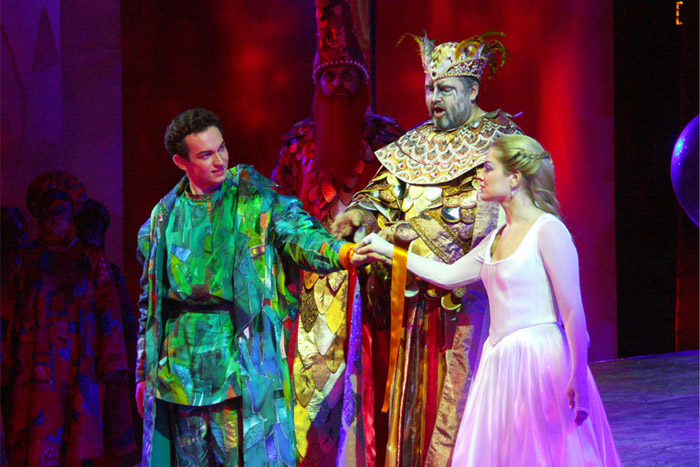 Prologue
Leshy is anticipating the arrival of Spring. Spring appears, accompanied by birds and animals. Sixteen years previously, she married the ancient and stern Father Frost and they had a daughter – Snegurochka. Since then, the land of the Berendeys (mystical forest-dwellers) has suffered bitter winters and cold springs as the sun god Yarilo is jealous of the marriage.
Father Frost enters. He must leave the land of the Berendeys soon, but is concerned as to what will come of his daughter: Father Frost has heard that Yarilo intends to kill Snegurochka by filling her heart with the fire of love (as long as she remains cold, Snegurochka is in safety). Father Frost and Spring decide to entrust their daughter to Bobyl, an inhabitant of sloboda.
Snegurochka appears. When she learns she is to live among men she is unable to hide her joy. Father Frost and Spring take leave of Snegurochka and instruct Leshy to look after her and respect her.
Gradually people flock to the Red Mountain. Leshy hides Snegurochka. The Berendeys are accompanying Shrovetide. Bobyl and Bobylikha notice Snegurochka and are delighted to accept her into their family. Snegurochka bids farewell to her past life and from now on will live among men.

Act I
The village of Berendey. The people are discussing Snegurochka´s arrival. Lel appears. Bobyl and Bobylikha introduce him to Snegurochka. She is charmed by the shepherd and his songs. She asks him to sing for her and gives him a flower in return. Lel sings, but is distracted by the other girls and forgets Snegurochka. She is insulted that Lel finds her company dull and decides to ask her mother Spring for some heartfelt warmth in order to set Lel´s heart ablaze. Snegurochka´s friend Kupava is sympathetic for her, but she cannot wait to share her own joy. She is happy because today her fiancé Mizgir is due to arrive in sloboda. He appears. In line with custom, the groom ransoms his bride from the youths and maidens of Berendey. The marriage ceremony begins, but Mizgir´s gaze falls upon Snegurochka. Staggered by her beauty, Mizgir turns from Kupava and begs Snegurochka to return his love. Kupava feels humiliated. In despair she wants to drown herself, but Lel restrains her. The people condemn Mizgir and advise Kupava to seek justice from Tsar Berendey.

Act II
Headed by Lel, blind people praise Tsar Berendey. Tsar Berendey, however, is ill at ease, sensing the sun god Yarilo´s disfavour: every year summer is shorter than before and spring becomes colder.
Berendey makes a decision in order to win back Yarilo´s favour: he will celebrate Yarilo´s Day by wedding all the young couples in the kingdom of Berendey.
Kupava runs in, tears streaming down her face. She begs Berendey to take her part and punish Mizgir for betraying and humiliating her. Berendey is enraged. He gives the order that Mizgir must be found and the people called to the royal court. The Tsar insists that Mizgir marry the girl he has insulted. Mizgir, however, rejects Kupava: he loves Snegurochka. Berendey sentences Mizgir to eternal banishment, but Snegurochka appears and the Tsar, entranced by her beauty, changes his decision. Mizgir will attempt to raise the fire of passion in "Snegurochka´s chaste heart" before Yarilo´s Day.

Act III
The young men and women are singing round dances in a sacred forest in the kingdom of Berendey. Deeply moved by Lel´s singing, the Tsar suggests he choose a girl to reward "the singer of love with a passionate kiss" in front of the assembled crowd. Snegurochka waits for Lel to choose her, but the shepherd instead selects Kupava. In tears, Snegurochka runs into the forest.
The people depart. Alone, Snegurochka pines and dreams of Lel. Mizgir appears. Snegurochka is frightened at his passionate declarations. She flees in confusion. Mizgir wants to follow her but Leshy stops him and drives him away.

Act IV
Early one morning, Snegurochka is waiting for her mother Spring beside a lake. Spring arrives, surrounded by flowers. This is her final hour in the land of the Berendeys. At dawn, the sun god Yarilo´s reign will begin and summer will come. As she departs, she gives her daughter a garland of magic flowers which can bestow the ability to love, and warns her of the sun god Yarilo´s fiery eyes.
Mizgir enters, desperately searching for Snegurochka. Filled with elation and love, she is unable to tear her eyes from Mizgir – her heart is full of new sensations.
People enter the valley. Tsar Berendey and his suite arrive. Mizgir asks the Tsar to bless his union with Snegurochka. A bright ray of sun falls on Snegurochka. Unable to withstand Yarilo´s warming rays, Snegurochka melts away. In grief, Mizgir throws himself into the waters of the lake.
However, "the sad passing of Snegurochka and Mizgir´s terrible death" will not cast a cloud on the festival of the Sun. With Snegurochka´s death, Father Frost loses his power over Spring. He can no longer freeze people´s hearts and souls. The sun god Yarilo will grant favour to the land of the Berendeys once more, bringing peace and prosperity.