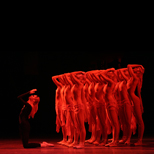 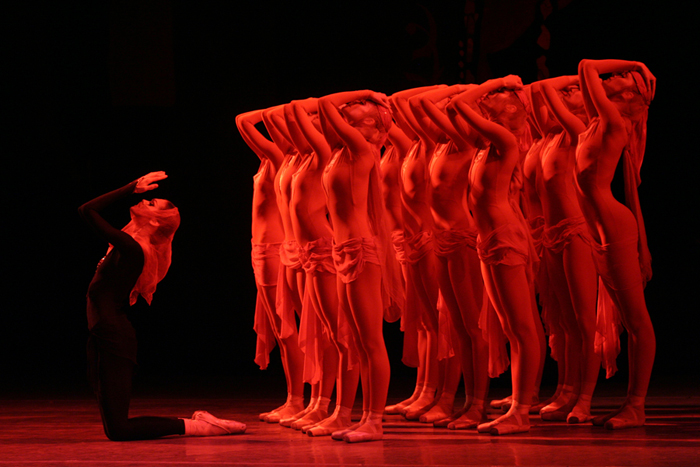 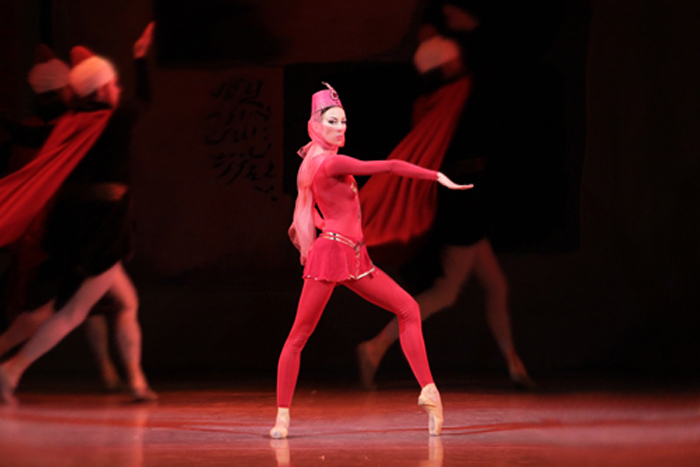 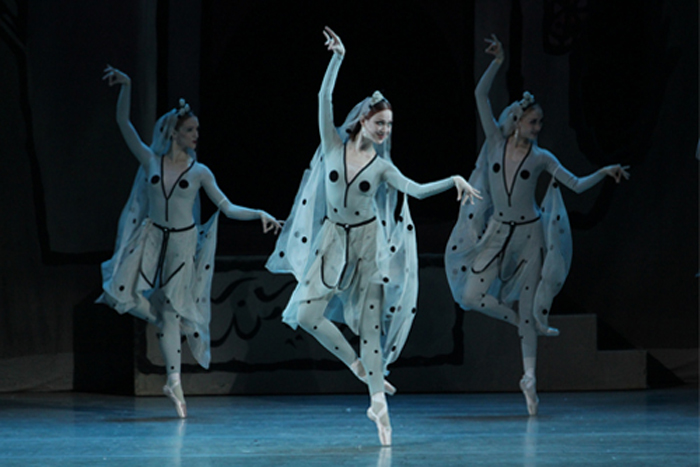 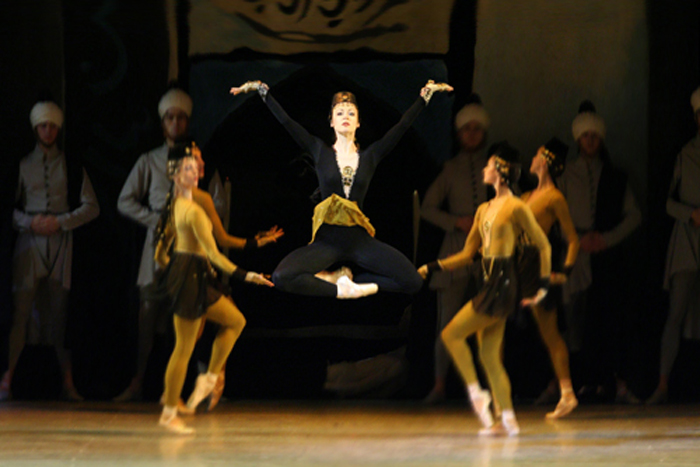 Act I
Scene 1
A chamber in the palace of Queen Mekhmeneh Bahnu. Her younger sister, Princess Shyrin, is suffering from a deadly illness. The Queen’s heart is heavy with grief. Her attendants and the Vizier are in despair.
Warriors usher in a stranger, who claims he can cure the Princess. Mekhmeneh Bahnu throws gold at his feet, but the stranger refuses to accept it. The Queen offers her crown as a reward if he cures Shyrin. The stranger rejects this too. He demands that Mekhmeneh sacrifice her beauty to save her sister’s life. The Queen consents.
The stranger restores Shyrin to health. She rises from her death-bed; Mekhmeneh’s face, however, is so disfigured and ugly that Shyrin merely stares at her sister without recognising her.

Scene 2
The garden near Princess Shyrin’s palace. Some artists, including the young Ferkhad, are decorating an arch.
Mekhmeneh Bahnu and Shyrin enter the garden, accompanied by their attendants. They have come to see the new palace. The sisters are struck by Ferkhad’s handsome features and are unable to take their eyes off him.
The procession moves on. Ferkhad remains alone, engrossed in his work. Suddenly, Shyrin calls to him. The young people are irresistibly drawn to each other. Ferkhad, however, learns that the maiden to whom he has given his heart is Princess Shyrin. It is therefore hopeless for him, a humble painter, to dream of ever winning her.

Act II
Scene 1
The people are standing around a spring which has run dry. They will have to cut through a high mountain in order to open up a channel for the stream of water – a task way beyond any human effort. Water is brought from afar, but only for the inhabitants of the palace.

Scene 2
The Queen is tormented by her passion for Ferkhad. The jesters fail to divert her. She realises what a huge sacrifice she has made for the sake of her sister. Mekhmeneh Bahnu is young, she longs for passion, but now she is ugly and Ferkhad will not love her.

Scene 3
Ferkhad’s devotion has made Princess Shyrin supremely happy. The young man makes his way into her chamber. Their love culminates in a perfect union of their two fervent hearts. Shyrin cannot bear the thought of leaving Ferkhad. The Princess resolves to leave the palace and without hesitation follows her beloved.
The Vizier learns of Shyrin’s flight, and brings the unwelcome tidings to the Queen. In a fit of rage, Mekhmeneh gives an order that her ungrateful sister should be seized and brought back. Warriors overtake Ferkhad and Shyrin.
The Princess entreats her sister not to separate her from Ferkhad.
The Queen is beside herself with anger and mortified pride.
She challenges Ferkhad to complete an impossible task – he must cut a channel through the mountain to let the waters of the upland streams flow down into the valley. Only then may Shyrin be his wife.

Act III
Scene 1
It is night. Ferkhad is in the mountains, alone. He fancies that he has already cut through the rock and that a little stream of water is running slowly out of the opening. He imagines he sees his beloved in the flowing water.

Scene 2
Mekhmeneh Bahnu has lost her peace of mind. She loves Ferkhad to distraction. She thinks of him day and night. In her imagination, she has regained her beauty; Ferkhad loves her and she is happy at last! Shyrin runs into the chamber, shattering her dreams. The Princess cannot live without her beloved; she implores the Queen to go with her into the mountains to find Ferkhad.

Scene 3
Hope has brought the people to the mountains. If Ferkhad accomplishes his task, their suffering will end. Every blow of Ferkhad’s pickaxe resounds in the people’s hearts. Mekhmeneh Bahnu and Shyrin arrive. Ferkhad is overjoyed – Shyrin has come and will remain with him. Mekhmeneh, however, is cunning; she promises not to part the lovers only on the condition that Ferkhad gives up his work, throws down his pickaxe and leaves with Shyrin. Ferkhad knows that this is impossible, as he cannot betray the hopes of the people. Shyrin understands this too. They bid each other farewell, to part forever. Ferkhad stays with the thankful people whose happiness is dearer to him than Love itself.