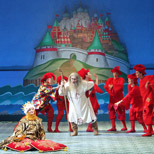 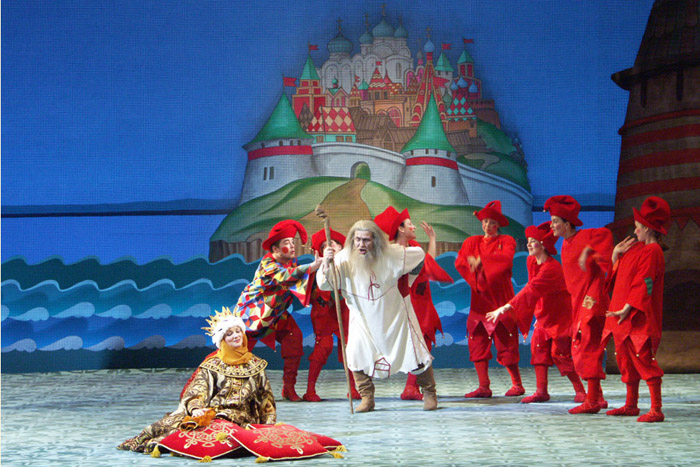 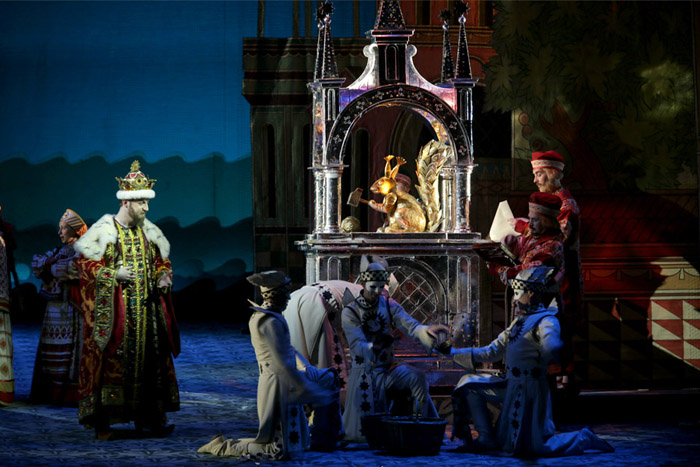 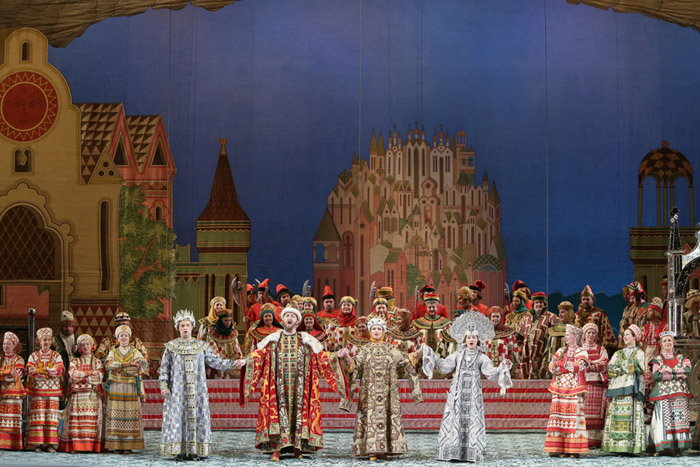 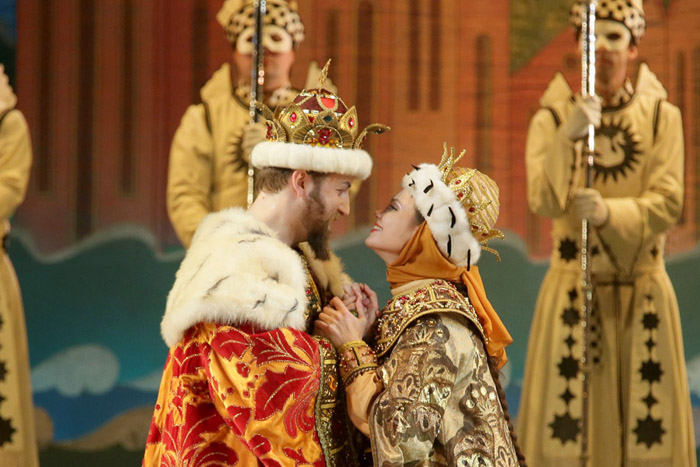 Prologue
A winter’s evening in a village, and three sisters are sitting at home spinning yarn. The eldest and the middle sister boast of their beauty and skills while the youngest remains silent.
Her sisters consider her a fool for  being so mild and modest and leave the work to her.
Each dreams of how happy she would be if the Tsar married her. The eldest boasts of the feast she would throw, such as has never been seen before; the second would weave a great amount of linen; and the youngest promises she would bear the Tsar a brave son. Tsar Saltan, who has been standing by the window, overhears the conversation. He enters the room and announces his decision – all three will live at the palace, the eldest as a cook, the second as a weaver and the youngest as his wife. The Tsar departs with the youngest sister and the two remaining sisters begin to plan how they can undo their foolish sister’s happiness. They plot to deceive Saltan.

Act I
The Tsar has left for  the wars, and in the meantime Tsaritsa Militrisa has given birth to a son. Life in the Tsar’s palace is peaceful. Only the Tsaritsa is troubled: she is worried that the Messenger has not come with a letter from Saltan for  a long time. In vain the jester tries to amuse her with his tricks; she is left unaffected by the Old Man’s tales and the feigned kindness of her sisters who bring her presents. Suddenly the unceremonious and indiscreet Messenger appears; the plotters, having got him tipsy, have managed to substitute Saltan’s letter. The people seem undecided but give way to the triumphant threats of the sisters and Babarikha – Militrisa and the young Tsarevich are sealed in a barrel and cast into the sea.

Act II
The bare shore of the island of Buyan. Having listened to the Tsaritsa’s prayers, a wave has washed the barrel ashore. Militrisa laments her fate, while the Tsarevich, now a young man, amuses himself, taking delight in the world around him. He makes a bow and departs to hunt some game, but suddenly sees a huge kite chasing a swan; taking aim, he shoots an arrow at the kite and kills it. To the great surprise of the Tsarevich and the Tsaritsa, the Swan-Bird comes out of the sea and begins to speak to them. She promises to repay kindness with kindness and disappears. Night falls. Mother and son are asleep. At first light, they see a city has magically appeared out of the mist. A festive procession appears at the city gates to the merry peal of bells and cannons firing. The residents of the magical city of Ledenets rapturously welcome Guidon and ask him to become their ruler.

Act III
First scene
Guidon has become the people’s Prince, but he thinks longingly of his father. His sad gaze follows a ship that is headed towards Saltan’s kingdom. The Swan-Bird appears at Guidon’s call.
On hearing the reason of his sorrow, she turns the Prince into a bumble-bee so he can catch up with the ship and see his father.
Second scene
The ship arrives in Saltan’s kingdom. The Tsar welcomes the shipmen, lays on a feast and asks about the miraculous things they have seen on their journeys around the world. The shipmen tell of the magical appearance of the city of Ledenets on a desert island, of a squirrel that nibbles golden nuts, of thirty-three knights of the sea and of the brave and mighty Prince Guidon who rules the city. Saltan is astonished – he wishes to see this miraculous city;
Tkachikha and Povarikha anxiously try to dissuade him. Babarikha tells of one miracle not to be found in the city of Ledenets – a Tsarevna of indescribable beauty, who lives far away across the seas. Angered by the intrigues of the conspirators, the bumble-bee stings each of them in turn and flies off, leaving behind chaos and confusion.

Act IV
First scene
Guidon once again sadly walks by the sea. He cannot get Babarikha’s tale out of his mind.
He sorrowfully calls the Swan-Bird and, telling her of his passionate love for  the unknown beauty, asks for  her help. The Swan-Bird is moved by Guidon’s plight and she turns into the beautiful Princess he dreamed of. Tsaritsa Militrisa gives her blessing to the young couple.
Second scene
Guidon and Militrisa await Saltan’s arrival in joyous trepidation. To the sound of bells ringing, the people welcome the Tsar and lead him and his retinue to the palace. The miracles of Ledenets are displayed. The Tsar and the guests are astonished when they see the magical squirrel in its crystal house, the thirty-three knights of the sea and the beautiful Swan-Princess; finally Saltan’s beloved wife Militrisa enters. In tears, the Tsar embraces her and his son, and in his joy for gives the two envious sisters. A great feast ensues.