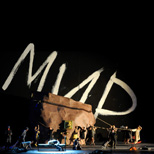 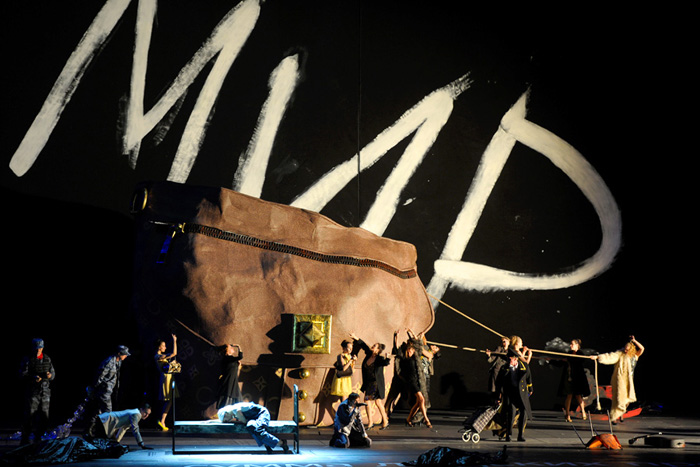 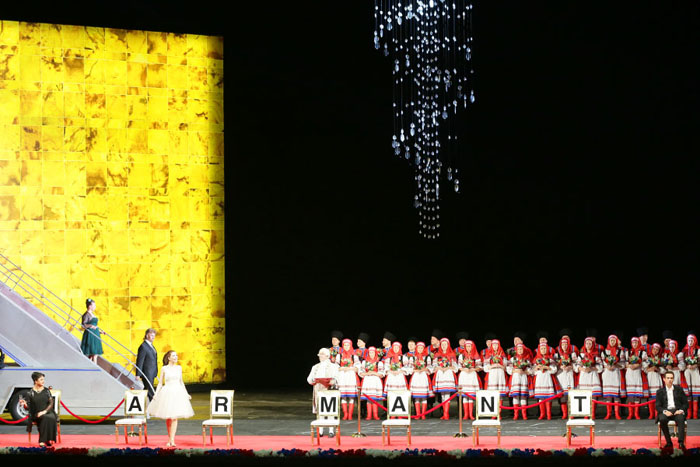 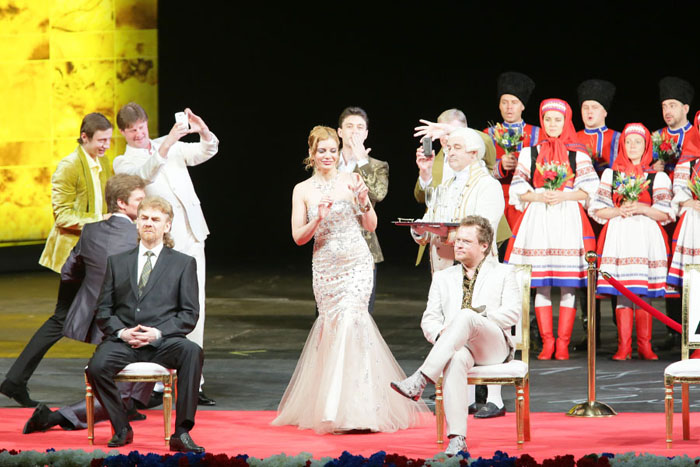 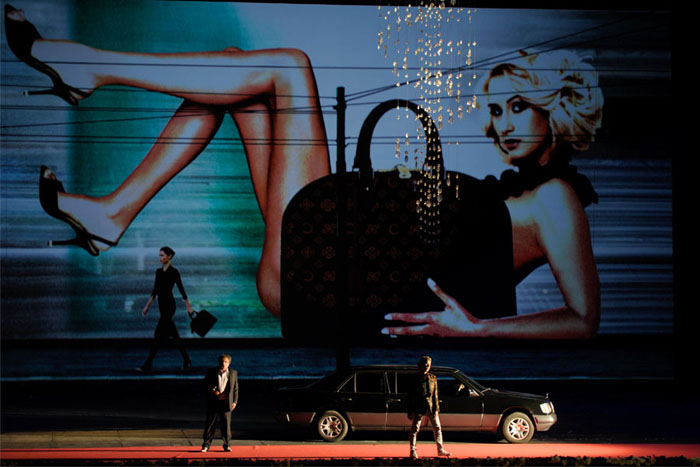 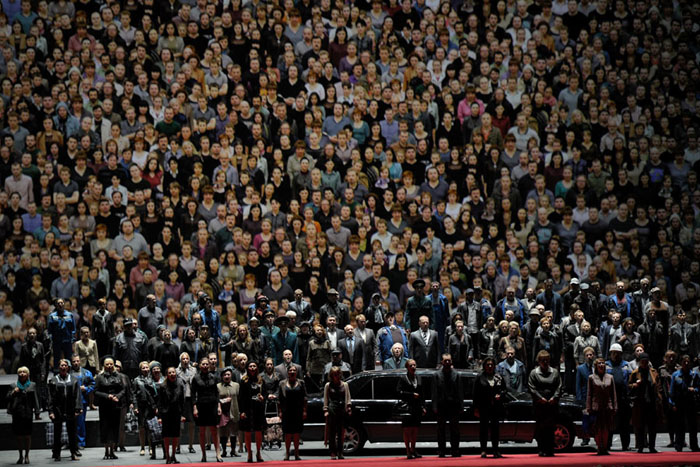 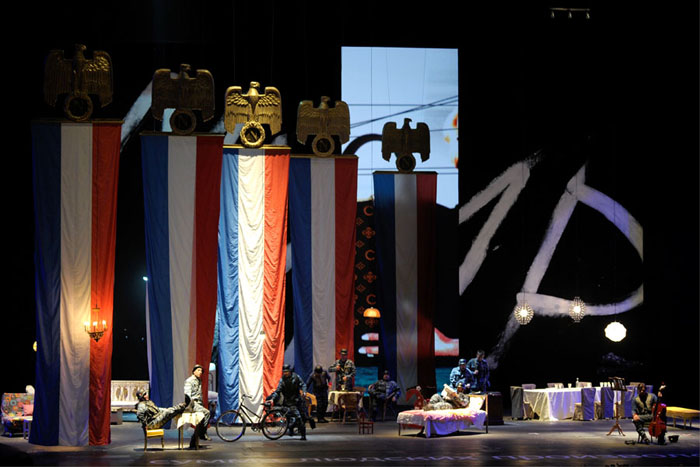 Act I
Prince Andrei Bolkonsky recalls an old oak tree he recently saw in the forest. With its dried, broken branches and scarred bark, the old oak stood out amidst the youthful forest verdure and seemed to say: “Spring, love, happiness... Are you not weary of that stupid, meaningless, constantly repeated fraud? There is no spring, no sun, no happiness!”
Natasha Rostova, thrilled by the beauty of the spring night, is unable to sleep. Prince Andrei recognises her voice. “There is something very, very special in this young girl who wants to fly away,” he says, seized by an “unreasoning springtime feeling of joy and renewal.”

A ball
Count Rostov brings Natasha and her cousin Sonya to their first grand ball. Among the guests are Count Pierre Bezukhov, his beautiful wife Hélène and her brother, Anatole Kuragin. Natasha is anxious that nobody notices her and that she will not dance at all. Guessing at the young girl’s feelings, Pierre approaches his friend Prince Andrei and suggests that he invite Natasha for a waltz. After the dance with Natasha, Prince Andrei, quite to his own surprise, tries to guess his fortune: “If she goes to her cousin first and then to the other lady, she will be my wife.” Natasha goes first to her cousin.

In the mansion of old Prince Bolkonsky
Count Rostov and Natasha, now engaged to Prince Andrei, have come to call on Andrei’s father, the old Prince Bolkonsky who has insisted that his son spend a year abroad. Natasha believes that the prince, on knowing her closer, will love her and no longer disapprove of his son’s intention to marry.
Prince Bolkonsky refuses to receive the Rostovs. They are received instead by his daughter Princess Marya. Natasha is indignant to the point of tears by the princess’ coldness and by the insulting behaviour of the old prince who suddenly appears. She does not wish to stay any longer in this inhospitable house. Natasha feels the pangs of love, stronger than ever before.

The boudoir of Hélène Bezukhova
Invited to a soirée in the house of Hélène Bezukhova with Natasha and Sonya, Count Rostov is “displeased to see that the company consists almost entirely of men and women known for their loose conduct.”
Hélène knows that Natasha is betrothed to Prince Andrei, “one of the most clever, well-educated and energetic young men”, yet she readily helps her dissolute brother Anatole Kuragin to make advances on the pretty young girl. The idea of bringing together her brother and Natasha amuses the countess. While she takes care of the father, Anatole expresses his love to the daughter, giving her a letter in which he suggests that they elope.
Natasha cannot resist the overpowering flood of emotions. “How dear, how terribly dear this man suddenly became to me...” Sonya fails to bring her back to reason.

Dolokhov’s study
Dolokhov has made all the arrangements for Anatole’s elopement with his new obsession. However, having found money and a coachman, Dolokhov attempts to dissuade Kuragin from his wild plan. But Anatole is bent on pleasure and readies himself for Natasha.

The home of Maria Dimitryevna Akhrosimova
Natasha is waiting for Anatole. She has made up her mind to elope, breaking off her engagement with Prince Andrei without informing her parents. Akhrosimova learns of the intended elopement from Sonya. When Anatole calls for Natasha, he finds his way barred by the butler and runs away.
Maria Dmitriyevna, horrified at Natasha’s conduct, tries to rebuke the girl but gets nowhere. She asks Pierre Bezukhov to take measures “as otherwise there will be a scandal.”
Pierre, who has recently begun to think about the girl engaged to his friend with an excitement that terrifies him, now asks himself how Natasha could behave like his own wife. He tells her that Anatole is already married. But when he sees her suffering and her abject sense of guilt towards Andrei, in a gush of compassion Pierre confesses that he loves Natasha himself. Natasha tries to take her own life.

The home of Pierre Bezukhov
Hélène and her foreign guests are amused at her brother’s adventure. Pierre demands that Anatole Kuragin leave Moscow immediately. The frightened Anatole agrees to this demand only when it includes a handsome pay off.
Pierre finds his home despicable, his riches useless and the people around him worthless. Only the thought of Natasha brings him any sense of joy. But news arrives: Napoleon has advanced his troops to the Russian frontier.

Act II
On the eve of the Battle of Borodino
Getting ready for the Battle of Borodino, volunteers are hard at work. Lieutenant-Colonel Denisov, looking for Field-Marshal Kutuzov, tells Prince Andrei of his bold plan for a partisan surprise attack.
Denisov had once proposed to the fifteen-year-old Natasha Rostova. When he leaves, Andrei recalls Natasha – and his own stupidity.
Refugees from Smolensk tell of the horrors of war. Pierre Bezukhov arrives, eager to see the battle for himself. He distracts Prince Andrei from gloomy thoughts about Natasha’s breach of their engagement and the death of his father following the retreat from Smolensk.
Field-Marshal Kutuzov appears. “A wonderful, a matchless people,” he says. “The beast will be mortally wounded by all of Russia’s might, it will be driven out of our sacred land.”
Napoleon is awaiting his own triumph and the enemy’s surrender. In his dreams he already imagines Moscow captured and a deputation with the keys of the great city. But instead news of killed and wounded generals arrives from all sides; one after another messengers of the French commanders ask for reinforcements. Napoleon has a presentiment of impending catastrophe.

A Council of War in Fili
Field-Marshal Kutuzov is holding a council of war. Should he risk the loss of the army and the fall of Moscow, fighting from disadvantageous positions, or retreat from the capital and save the army, and with it the hopes for a successful outcome to the war? Kutuzov issues the order to retreat: “The enemy will not be in Moscow for long. This will be their last victory.”

A street in Moscow, occupied by the French
Moscow is deserted, abandoned by its residents. The deputation with the keys of the city awaited by Napoleon has not arrived.
Pierre has remained in Moscow “to meet Napoleon and kill him, either to perish or put an end to the misery of all Europe.” He learns from the Rostov family’s chatelaine that the Rostovs have left Moscow. At Natasha’s insistence, the wounded soldiers staying in their home have been taken with them. It has been concealed from Natasha, however, that among the wounded is Prince Andrei. Moscow burns. A group of prisoners accused of starting fires are led in by French soldiers. Among them are Pierre Bezukhov and Platon Karatayev, a wounded soldier taken by the French from a hospital. Fulfilling Marshal Davoût’s order, the French soldiers execute several Russians.
The fire becomes increasingly intense. Under orders to get priests back into the churches, French soldiers seize a group of madmen coming out of a hospital, taking them for priests. The panic-stricken artistes of the French theatre flee. Napoleon makes his way through the smoke. He marvels at the courage of the Russians.
Prince Andrei is on the brink of death. He takes Natasha for one of his visions. Convinced that before him is the “real, living and breathing” Natasha, Prince Andrei confesses his love to her. Natasha begs his forgiveness. Prince Andrei’s strength leaves him. Natasha feels the life of her beloved passing away.

The Smolensk road during a blizzard. The retreat of the French troops
The remnants of Napoleon’s dream are staggering along the Smolensk road shamefully retreating from Moscow. Among their prisoners are Pierre and Karataev. Unable to keep going, Karataev is shot. The prisoners are released by partisans led by Denisov who tells Pierre that Natasha is still alive, but Andrei dead. Pierre sees the possibility of a future opening up before him...
Field-Marshal Kutuzov arrives: “The enemy has been beaten... Russia is saved!”